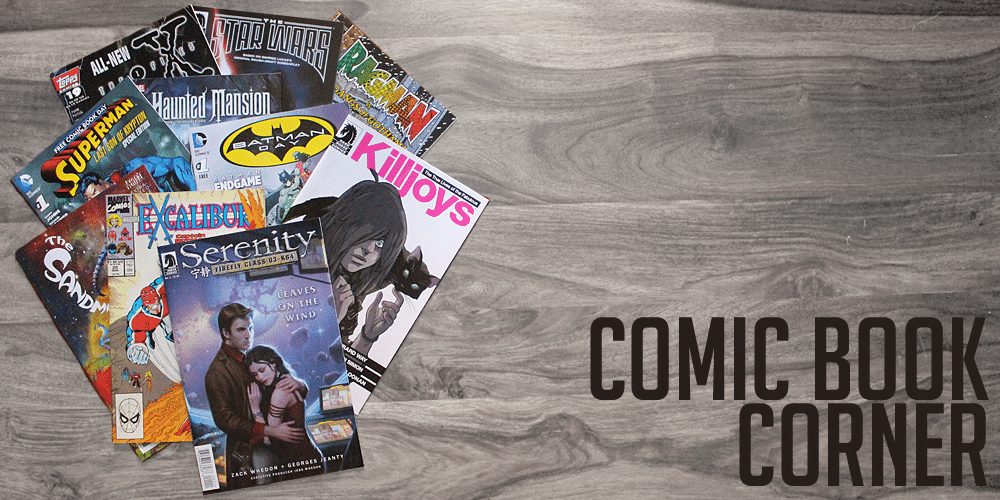 In this final column, Sophie, Beth, and Mariana share their thoughts on the latest comics from the worlds of Star Wars, Hellboy, Plants vs. Zombies, The X-Files, The Librarians, and James Bond. Thanks for joining us and we look forward to sharing even more with you in the new year.

As a fan of TNT’s series The Librarians, Beth hoped this book would be a satisfying fix until season four debuts this month. When the senior Librarian, Flynn Carsen, drags the rest of the crew down to a lecture by a filmmaker who specializes in flicks about Bigfoot, the Loch Ness Monster, and other paranormal mysteries, Beth’s taste for the weird received a full-on buffet.

Filmmaker Sol Schick is killed off by a colleague wielding a piece of Noah’s Ark despite the best efforts of Eve, Flynn’s Guardian, to save him. Oddly, the killer encourages the Librarians to delve into his victim’s life: could this all be a hoax, or is there a method to his madness? After they discover an empty grave and Ezekiel Jones breaks into the victim’s apartment, the crew gets a glimpse of Sol’s body surrounded by a group of angry-looking Bigfoots. Could magic be involved? Of course!

The starter issue of this series is pure cheesy fun for anyone who grew up on shows like In Search Of…, books like Chariots of the Gods, and UFO conventions. It’s a retro blast, and even the art is reminiscent of weird comics from the 1970s.

Another Dynamite title knocks it out of the park for Beth, but for different reasons. This James Bond-related one-shot shows us the Moneypenny character the world deserves; not the secretary pining for Bond in the movies, but Bond’s equal as an agent of MI:6 and an accomplished woman of color who refuses to indulge in distractions.

This Moneypenny serves as M’s bodyguard, and her mission is interspersed with scenes from her past, including her childhood reaction to a terrorist attack, her training as an agent, and her success rate with MI:6. The flashbacks fill in Moneypenny as a person: serious and dedicated. When colleagues pester her to have a drink and mock her focused attitude, she replies with a sarcastic punch, “Are you going to tell me I’d look prettier if I smiled next?” They nod in understanding because they wouldn’t try that with Bond, so they shouldn’t go there with her, either. During M’s visit to an American campus, those memories come in handy and Moneypenny keeps her charge safe while blasting away bad guys.

It’s a fantastic issue with action, heart, and not a bikini in sight. Hopefully, the folks at Dynamite will realize that Moneypenny needs many, many more issues to tell her tales.

Weird crystals, giant monster turtles, a mysterious man that can re-direct lightning… things continue to get creepy on the Pacific Ocean. Mariana knows that young Hellboy is learning the ropes, and is therefore not surprised when the weight of the story is not carried by him (he is busy fighting huge monstrous animals, after all) but by his mentor, who is doing an investigation of his own: there is a new occult danger and the British have no desire whatsoever to share their suspicions with him. Professor Trevor decides then to make the RBPD a bigger enterprise, and asks the American government for more staff and resources. Everything is mounting up against whatever comes next…

To read these comics in single issues is pure torture for her since she is known to devour a complete hardcover of 300 pages in a matter of hours. Still, next month comes with a Christmas special that has its very good moments (which make up for the shortness of these issues)–more on that later.

Plants vs. Zombies Volume 5: Petal to the Metal

Mariana and her two kids continued to enjoy the wacky humor and fantastically detailed drawings of these series (kiddo number two eventually decided to celebrate his 3rd birthday in Plant vs. Zombie’s spirit, brains and all).

Since there is no sense whatsoever to guide these stories, Mariana was not surprised when the plants express a desire to learn how to drive, or when Zomboss decides to have a race for the control of Neighborville.

Now, the best thing about this issue is the racing cars, be them sun-powered and plant-driven or some zombie concoction that has a reactor engine based on a hurricane (you read right). Mariana would love to see some Hot Wheels based on these drawings because a sunflower on wheels is just that funny.

The collection includes the main “Petal to the Metal” story arc, along with all bonus stories from Plants vs. Zombies comics #7 to #9. Dark Horse presents a three HC volume box set, the volume that Mariana will not comment on features some ring fights that are just really the game on the page, individual plant vs. individual zombie… to the K.O.!

Sophie was thrilled to get her hands on two more issues of the excellent Star Wars Adventures series from IDW.

The main story in issue three is about Finn during his time aboard the Finalizer and elaborates on his comment during The Force Awakens that he worked in “sanitation”. Opening with Finn tasked to clean green goo from a troop transport following a landing, the trooper soon discovers a stowaway in the form of an adorable, fluffy purple creature who proceeds to cause farcical chaos all over the ship. When Finn and his squad are tasked with going down to the planet to search for Resistance activity, Finn uses the mission as a cover to return the creature home, but when it causes yet more damage, he faces a difficult decision. The second story of the issue follows Cassian and K2SO after they discover several baby wookies aboard an Imperial freighter prior to a raid. Cassian leaves an unwilling Kaytu behind as a babysitter and the droid learns he has the potential to be more than his programming.

Issue four, meanwhile, is the first of a two-part story focused on Luke and Leia. The pair is headed to the planet Tibrin on an undercover diplomatic mission, however, shortly after landing, Luke is overheard talking about infiltrating and destroying the first Death Star by an Imperial droid. A battle ensues between the occupying Imperial forces and the Rebels which results in Leia being believed dead while Luke is knocked out and taken prisoner, leaving his sister behind to plan his rescue. The second story in this issue is about Mattis Banz, a main character in the Star Wars: Join the Resistance series of books by Ben Acker and Ben Blacker.

Star Wars Adventures continues to be Sophie’s favorite ongoing comic series. It does a fantastic job of bringing together elements from all over the Star Wars universe–the films, TV series, and books from all reading levels–and expanding the characters in new and fun ways. There are some great nods to the series as a whole here too, such as Leia naming her ship (which bears a remarkable resemblance to the Naboo Royal Starship once used by her birth mother) the Breha. Sophie is already excited to see where the series goes in the new year.

Sophie also finished off the final two issues of The X-Files Origins: Dog Days of Summer. This four-issue miniseries follows Mulder and Scully as kids in 1974 And 1977 respectively as they spend their summers poking their noses into things they shouldn’t in true X-Files style.

This series follows on immediately from last year’s X-Files Origins comic mini-series, and both kids are still dealing with the repercussions of those events. Each of the future agents gets their own story with a few overlapping characters, making this two books for the price of one in every issue.

Mulder’s story follows him and his friends getting pulled into strange goings on when they keep encountering Lisa, a young deaf girl who finds herself in trances, staring up into the sky at nothing. These trances seem to coincide with odd events such as the bodies of half a dozen whales washing up along the shore, or when the local fishing community report bumper hauls with fish “practically jumping into the net.” It doesn’t take Mulder and his friends long to figure out that the Oceanic Institute is involved, but then Lisa disappears and the boys are left clueless, while we get to see a little more of what is really going on in Martha’s Vineyard.

Scully, meanwhile, is still reeling from the murder of her Sunday School teacher last week when a passenger plane collides with an experimental Navy jet near her house. Watching the news, she recognizes the dead Navy pilot as the homeless man she identified as her teacher’s killer in the previous arc. Naturally, the adults in Scully’s life don’t believe this revelation at first, but it’s not long before the detective she spoke with last week turns up dead, having decided to trust her intuition. Like the boys, Scully takes the investigation into her own hands, surveilling the men she believes are involved, and ending up led right to her own father, while, once again, we get to see some more about the truth behind the plane crash and the events at Miramar Naval Base.

Both these stories have an obvious Stranger Things vibe as the kids race around on their bikes trying to uncover the truth from beneath the noses of disbelieving (and often sinister) adults. This second “season” of Origins also hints at a deeper significance for Mercy, the young blonde girl who shows up to befriend both agents, and at more involvement in the conspiracy for Scully’s father–something suggested in the X-Files YA novel Devil’s Advocate that was released earlier this year. Once again, Sophie hopes this comics series is renewed so that she can read more about young Mulder and Scully next summer. 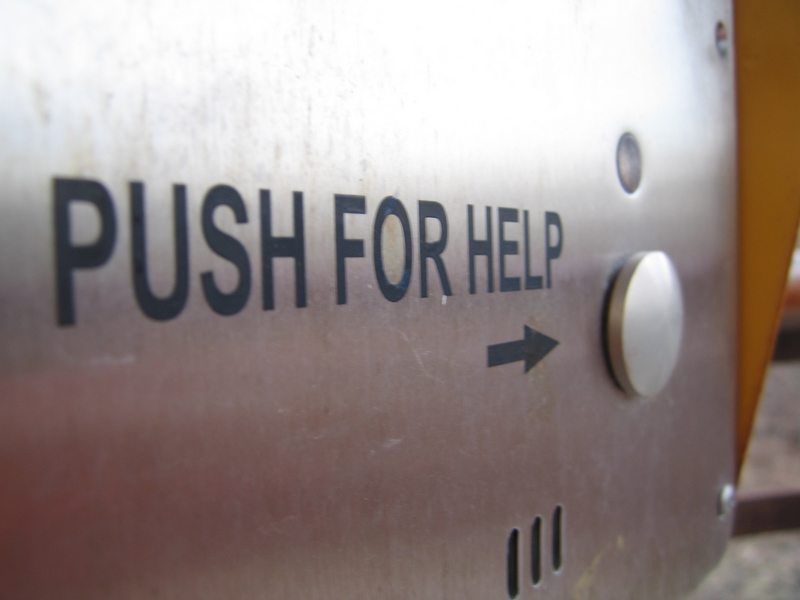 A Journey Through Anti-Depressants

Time for the Oscars Baby!