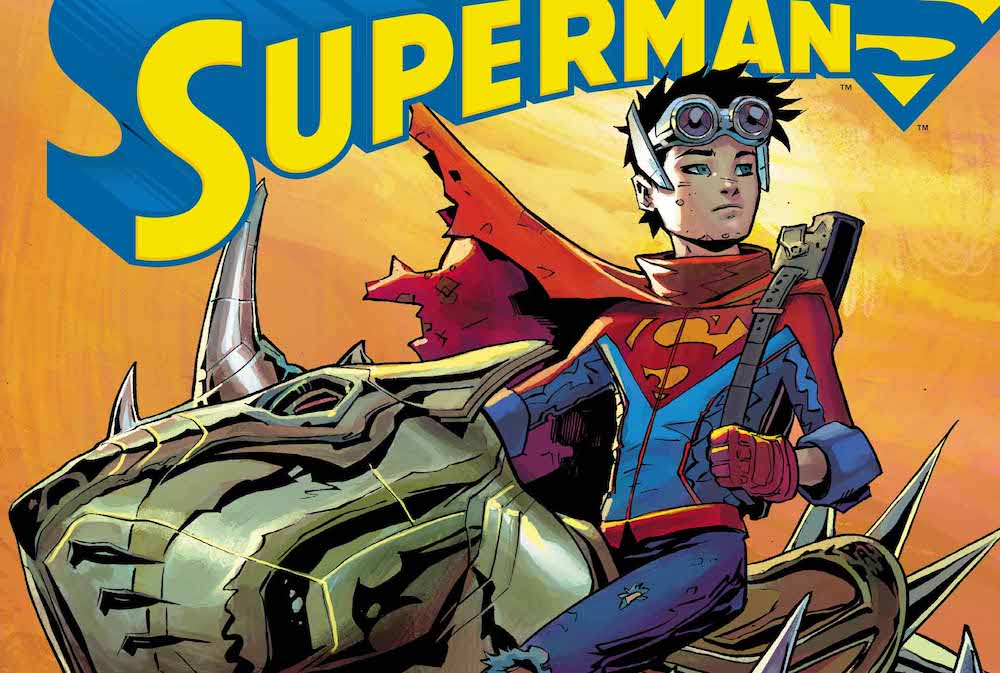 Corrina: Jon To the Rescue

Ray: The Super-family’s vacation on Apokalips continues. Last issue spotlighted Lois as she wound up being captured by and then inducted into the Female Furies, and this issue spotlights the boys of the family. Superman has to wrangle Lex Luthor, who has lured him there under false pretenses and seems to want Superman to ascend the throne of Apokalips. But the cultists who believed Luthor was their savior are none too happy to find out about this, and thus a big, elaborate chase sequence begins that involves some fun Kirby-esque tech and some great action segments. But it’s overall a relatively slight segment, that only gets more so when Kalibak shows up. There are a few odd segments where the timeline jumps around in an awkward fashion as well.

However, the true star of this issue is Jon Kent, beyond a shadow of a doubt. Ten years old and alone on a burning hell-planet, he responds by… jumping to the defense of hellhounds. That’s Clark’s boy, all right. And not only does he take on an army of Apokaliptan shock troopers to protect their vicious demon-dog mounts, but he then earns the respect of said dogs and befriends them. And when Superman and Luthor are captured by Kalibak (despite Lois’ best attempts to punch the sun of a dark God in the face, love her.), Jon rides to the rescue on an army of hellhounds. Eat your heart out, Damian–who’s got the best pets now? The issue isn’t perfect, but much like the Cooke-inspired issues earlier in the run, it’s a tribute to Kirby that rings true with some great characterization.

Corrina:  There must be a rule that Lois Lane isn’t allowed to do anything awesome more than once every few issues. Or any, for that matter. The brief glimmer that Lois would be the key to the Kents’ survival in Apokolips is quickly quashed as Jon Kent adjusts on the fly and seems to become the foretold savior.

The segments with Jon and his rescue of the Hounds are admittedly good, though a little bit graphic for young minds. (Eating dogs is icky.) Thankfully, Jon saves them and wins the alliance of the others. (And they’re not true doggies, they’re HellHounds  because… Apokolips.)

Meanwhile, Lex and Clark bicker like an old married couple, and Lois Lane basically gets a panel or two to stare up and access the situation. I suspect it all will turn out okay and I wish I was more invested in the fate of the natives of this terrifying land, but they’re not allowed much of a spotlight and so thus make little impression.

Review – Wonder Woman: Come Back to Me #4: The Next Adventure