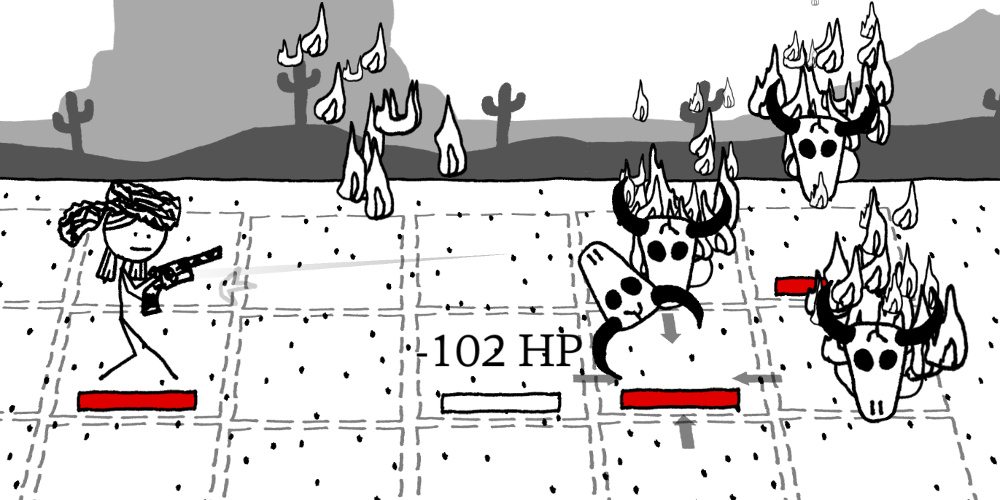 Yes, West of Loathing Has a Story

West of Loathing is the single-player extended universe built upon Kingdom of Loathing (a free, browser-based, multiplayer, comedy RPG). While I haven’t played Kingdom of Loathing, I know that it continues to have an active community, and that I’ve consistently heard good things about it. I suspect if you’re a fan of Kingdom, you’ll find a lot to enjoy in West.

In West of Loathing, your hero’s cliché is to head into the west to seek your fortune. And by west, I mean the wild west, one containing all the tropes of westerns: isolated towns, saloons, absent sheriffs, bad guys, and a good guy or gal (that’s you!) passing through to make everything right. But it’s also a world warped by Asymetric’s imagination to include demon cows, evil rodeo clowns, skeletal buffalo, and the grimiest spittoons you’ve ever encountered.

There is an over-arching main plot, in that you’re helping to extend the railway west until it reaches the coast, but it’s really more of a mechanism to gate your progression. Rather than a single epic quest, West of Loathing is a set of deftly interconnected locales, vignettes, and extended stories for you to explore.

Which isn’t to say you won’t care about the story. My “pardner,” Doc Alice (one of three you can choose to start with), was looking for revenge against an evil necromancer. Alice’s writing was very well done, chiming in with her thoughts about the undead from time to time, and one time even admonishing me quite strongly as I considered dabbling in the necromantic arts. I felt sufficiently bad about that interaction that I became determined to see her part of the story through to the end.

It’s not just your sidekick’s writing that is well done; the entire game is a comedic masterpiece. My typical reading experience in computer role-playing games goes something like this: “Blah, blah, blah ok you want me to kill this guy for that item. Got it.” In West of Loathing, I savored every word. The writers have crafted a surreal and hilarious work that always meshed internally, and generated numerous actual-out-loud laughs. Not only is it well written, but it’s copious: the sheer number of non-repeating random encounters in the game was staggering.

With its minimalist stick-figure drawings, you could be forgiven for thinking that the art isn’t an important aspect of the game, but Asymetric managed to breathe life into the characters with eye-catching animations and facial expressions. This is really shown off well if you unlock the perk “Stupid Walking,” which adds an option to the game’s menu to, well, walk around stupidly. I really enjoyed their use of shadows in underground areas as well; though the game looks flat, characters are actually rendered in a 3D environment, creating some compelling visuals.

As for the music, it’s a real treat. Old-west-style melodies, informed by the environment, are ever-present in the game and are really catchy. Combat music has an energy to it, while another track for creepy dungeon exploring drips with tension. I’ll be humming some of these tunes for weeks.

While I started out thinking the gameplay would be simple, offsetting the comedy narrative, it turned out that there is a decent RPG under the hood. Starting with your choice from one of three character classes (which A.J. O’Connell covered in her preview), West of Loathing gives you many opportunities to customize your character as you progress through the game, spending experience points on base statistics, miscellaneous skills, and combat skills. As you play, you’ll find books which present you with a further selection of skills to add to your character.

Another aspect I quite like are the perks. These are permanent changes to your character, often obtained through choices you make during the game. Some perks are utilitarian, such as “Mostly Scabs,” which I earned from purposefully walking into cacti repeatedly, provides a +5 hit point bonus. Others are there to open up new dialog or ability options during the game. My favorite was “Minesplainer”; it gives you a bonus when interacting with mining equipment. I’ll leave it to you to figure out how to earn it.

Those character choices result in a rewarding combat system which, while a simple turn-based affair, presents tactical options based on your build. As a “Snake Oiler,” I’ve been making heavy use of poison, while relying on my pardner for heals and taking out the undead with her bone saw.

West of Loathing also sports a surprising number of features to make your RPG experience as pleasant as possible. It will auto-level you, if you’d rather just spend time in the game and narrative. When you forget what you need to do next, you can check in with your pardner to get reminders on how to progress the main and side quests. The game also saves wherever you exit, and supports Steam cloud saves.

I did find that as the game went on, with me fully exploring each section of the map and customizing my character’s skills and equipment, that I became overpowered, reducing many fights to a foregone conclusion. I didn’t find this to have a negative impact on my experience, as the fights were sufficiently fast to not become a bother. Moreover, West of Loathing often gives you other ways to complete an encounter without fighting, by using other skills you’ve picked up along the way. Most of those alternative solutions are worth a chuckle as well.

My only complaint is that there was just so much to the game that it was possible to get stuck by missing something obvious. Maybe you haven’t fully explored an area, or perhaps you still haven’t read a note that’s been languishing in your inventory. It tripped me up a bit in finishing Doc Alice’s storyline, but it wasn’t anything a quick trip to a search engine couldn’t fix.

West of Loathing is a near-perfect mix of engaging, humorous narrative and gameplay. There’s no reason not to pick it up, which you can and should do, on Steam, right now, for $11. It’s coming “soon” for Android and iOS if you’d prefer to wait, but don’t tarry. Those spittoons aren’t going to search themselves.