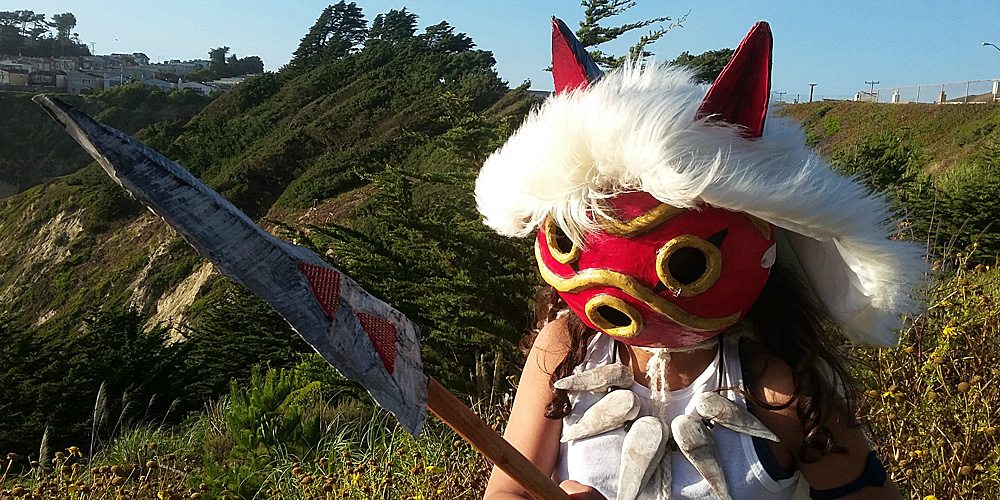 GeekDad:
How many members of your family are involved in cosplay?
Cheetah Girl Cosplay:
Being new to the world of cosplay, it’s currently just my daughter Gabriela (9) who has any finished projects to wear, but we’re definitely a team when it comes to process.
GeekDad:
How did you and your family get in to cosplay and prop/armor making? Did one particular member start it or did you all jump in together? What was your first cosplay?
Cheetah Girl Cosplay: 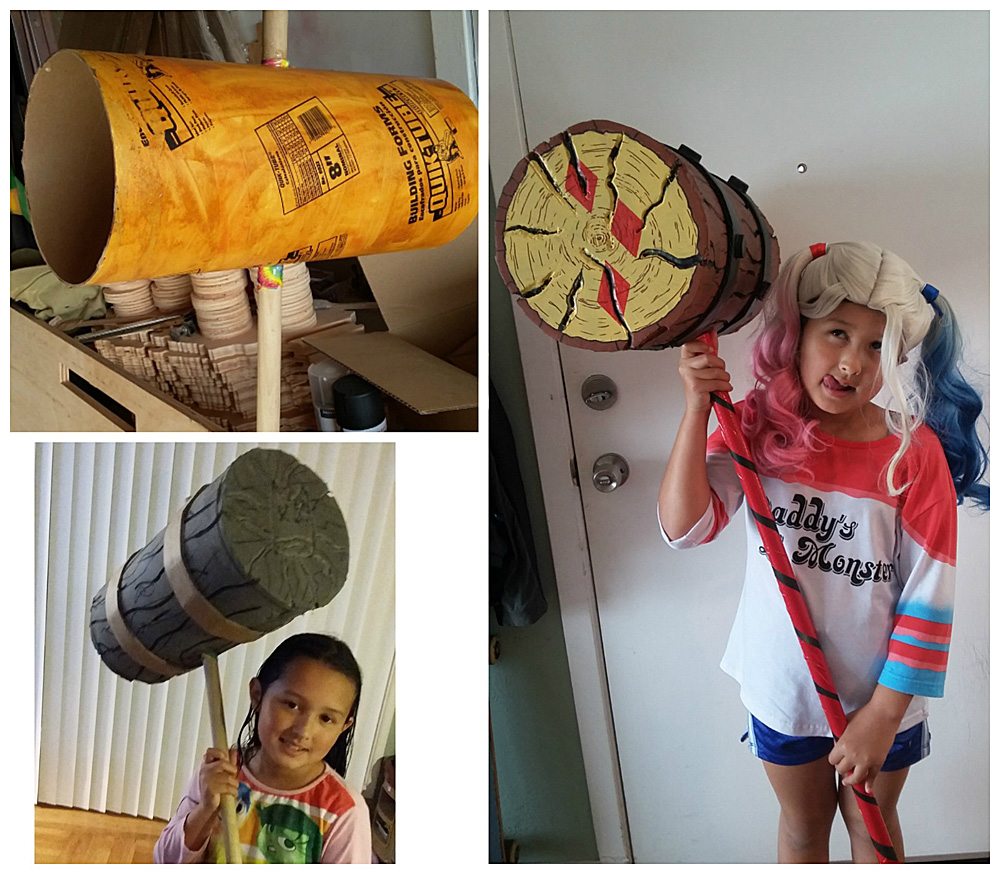 I’m sure lots of people start the way we did, with a Halloween costume. Last year, Gabi settled in on Harley Quinn pretty early with Suicide Squad out in theaters. After being gifted the wig and the “Daddy’s Monster” tee, I wanted to add something to the overall look. I settled on the hammer because it sounded like a lot more fun to make than a baseball bat. It was a quick build as time was short, but I definitely want to give credit to DIY Prop Shop on YouTube for the basic material and process tutorial. I’m pretty handy in the wood shop, but working with foam and bottle caps was a new experience.
GeekDad:
Do you have a favorite cosplay of yours? A favorite group cosplay you’ve done as a family?
Cheetah Girl Cosplay: 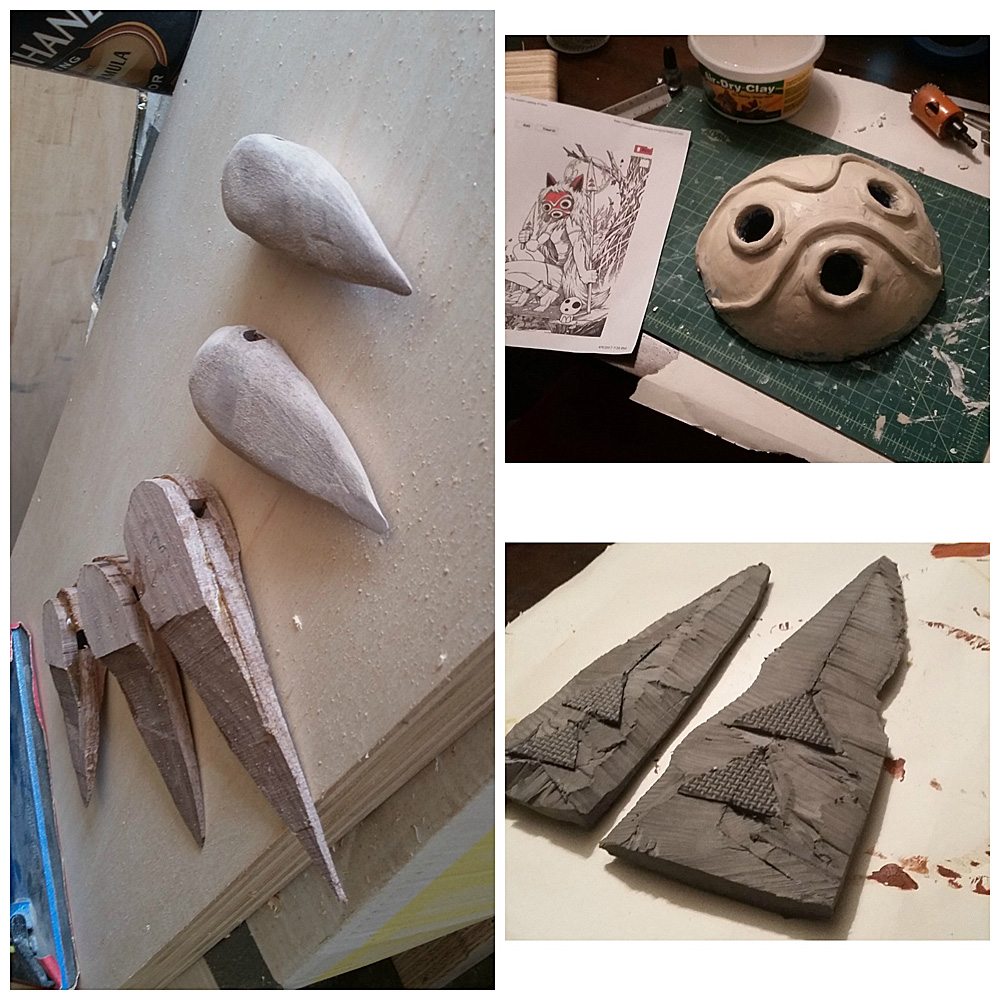 We’re big Ghibli fans. During a family visit to Japantown in San Francisco about 3 months ago, we saw posters for the SF Anime and Cosplay Festival, which inspired us to take on our first true project, San from Princess Mononoke. I had been searching for something creative for us to do together, and having a deadline and goal kept us both motivated to keep things moving. So it was back to YouTube where we got some good direction to start from Chezlin’s DIY channel.
GeekDad:
Speaking of group cosplay, do you always try to cosplay together? Or do you all do your own thing?
Cheetah Girl Cosplay:
So far, it’s just Gabi, but I also have a two-year-old daughter, so we already have visions of turning her into a tree spirit to go with the San outfit.
GeekDad:
Do you have a favorite piece that challenged you?
Cheetah Girl Cosplay: 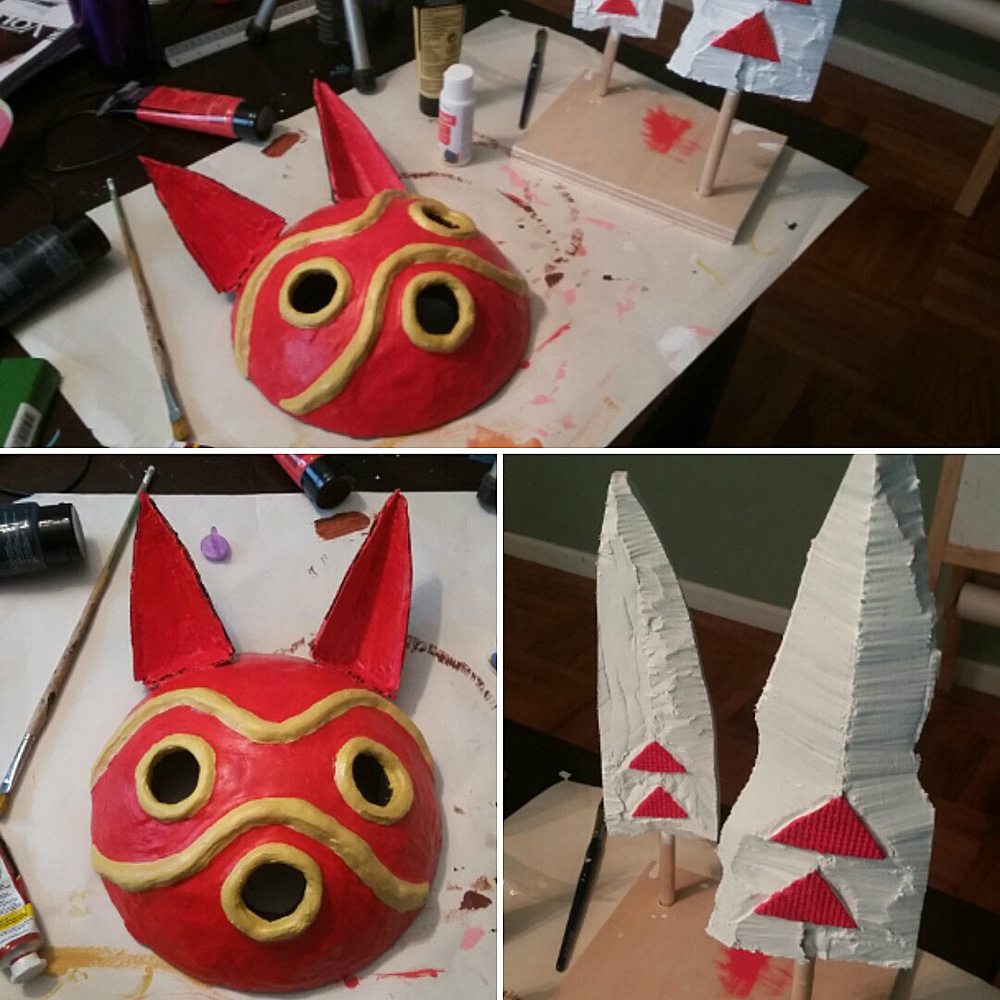 Having never worked with many of these materials, there was a lot of trial and error on this because it was our first build. The toughest fight was working with the Crayola air dry clay we bought for the mask. It cracked when drying so ended up taking 3 coats, and I learned to cover it in cling wrap to slow the drying process.
GeekDad:
What’s your favorite “medium” to work in (sewing, EVA foam, resin casting, etc.)?
Cheetah Girl Cosplay:
As we’re so new, right now, I’m just excited to learn new processes to get a better grasp of all the possibilities. I would love to get better at finishing techniques, as that’s where I see so much potential for detailing and individuality. I had to enlist a coworker on the Mononoke cape and hood, so I’d love to learn how to sew myself too.
GeekDad:
It’s been awhile, but I used to do quite a bit of scale model building and I see a lot of similarities in techniques between small-scale building and prop and armor building. Have you ever done any scale modeling or smaller scale builds?
Cheetah Girl Cosplay: 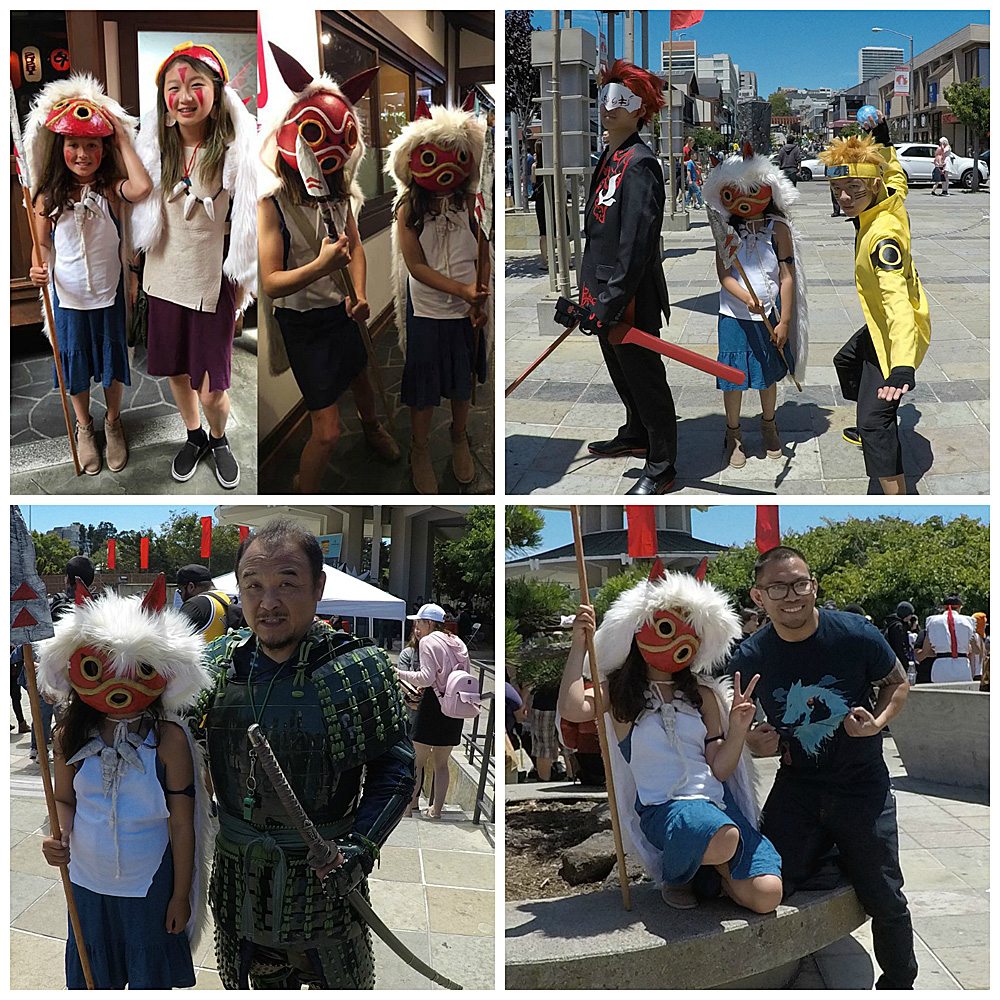 My background is in architecture, so I’m no stranger to model building. I think that helps in terms of having a good sense of what structure and assembly is needed, but I can’t say I’ve tried anything that complex yet.
GeekDad:
Most of our readers are parents and, like me, want to share their geeky interests with their kids. I’ve been doing father and son cosplay with my son since he was born. Do you have any suggestions on how parents can get their kids interested and involved with cosplay and fabrication?
Cheetah Girl Cosplay:
For me, I was just desperate to find something for her to do other than watch people play video games on YouTube. (I still think that is so bizarre.) Once I was able to steer her towards channels showing people making things, she started looking on her own. As with all things parenting, I’ve found the best results when you can guide them towards something and let them discover it on their own.
GeekDad:
Something along the lines of “Being a geek isn’t about what you love but how you love it,” is sort of the new geek mantra. Do you have anything, besides cosplay, that you consider yourself a geek about?
Cheetah Girl Cosplay: 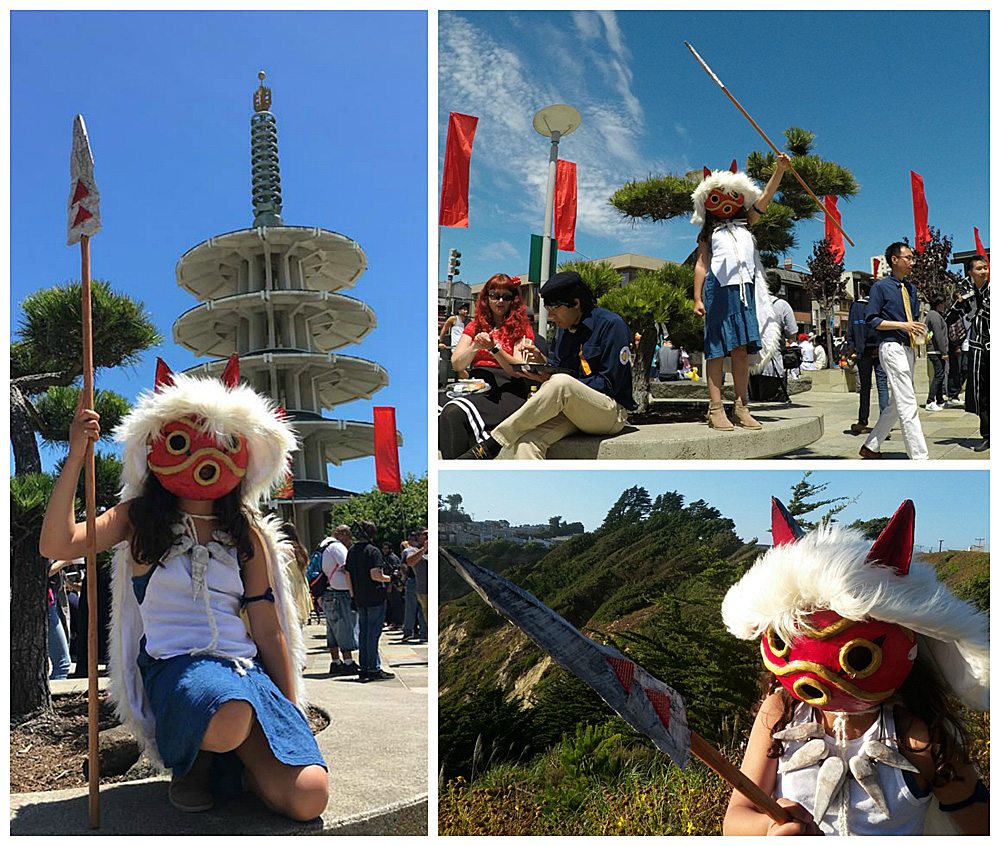 I grew up in classic geek/nerd style for someone born in the ’70s–D&D in the basement, 8-bit video games all day, Star Trek TNG every night on cable. The geek gene is strong in Gabi, but the only things from my youth I’ve been able to remotely get her excited about is Thundercats, as she has a love for all things feline.
GeekDad:
What upcoming conventions do you have on your schedule that people could see you at?
Cheetah Girl Cosplay:
We’re in the Bay Area, CA so we’re eyeing SF ComicCon. It’s six weeks away, which sounds like a lot, but Gabi wants to do a whole new Naruto inspired outfit so we need to get started. She’s also said that she doesn’t want to be the only one dressed, so I’m planning on going as Jonathan from the 1975 Rollerball film. I know nobody under 35 will have any clue who it is, but I think some of the older crowd would get a kick out of it, and all I need is a football helmet and some gloves with foam spikes. 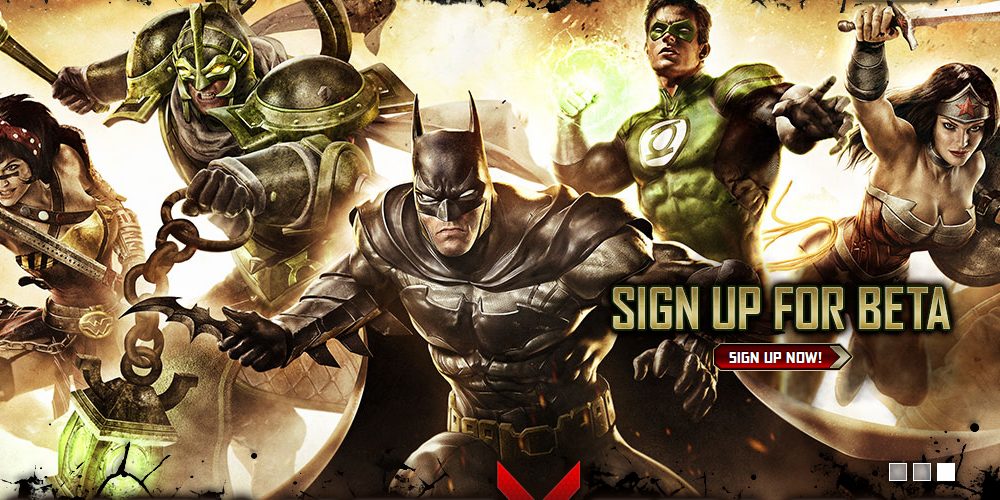 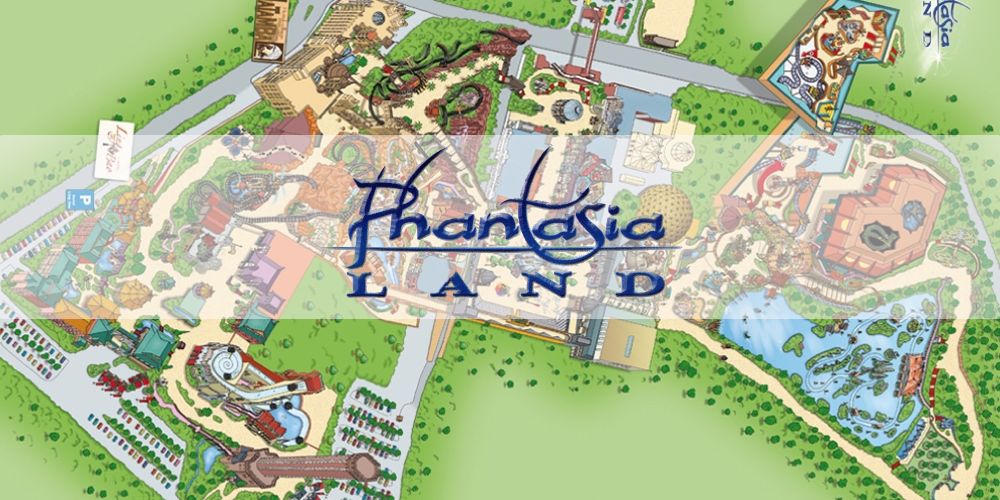