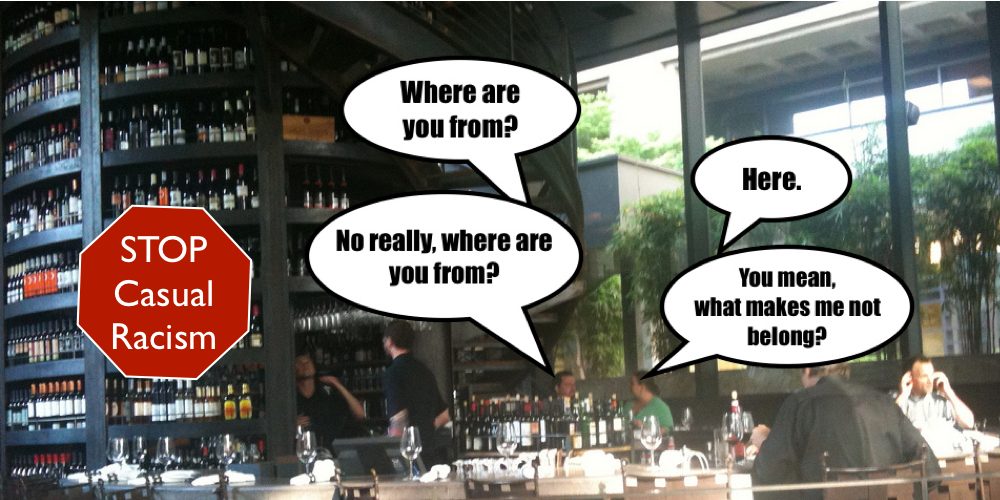 Dear drunk man in the wine bar on Saturday night,

Let me introduce you to a concept called casual racism. You walked by our table and said hello. We were sitting there, minding our own business, and you were just being friendly. That’s cool; it was nice to meet you. But then, courtesy dictates that you then proceed to where you were heading (the bar), then return to your wife waiting for you outside on the patio (we know because we were listening to what you had to say). But you’re a social being, evidently, and just wanted to talk. You had had a few too many, and maybe that makes you chatty. Okay. But when you sober up, here’s hoping you can understand the dialog from our point of view.

Where Are You From?

“Where are you from?” you asked.

This is a rude question. You may think it’s an ice breaker, but that means that whatever answer is given, you accept it. You don’t know better than me. Remember, you were not forced into this encounter. You chose to engage us in conversation, which means that in the future, it would be nice to come up with some better ice breakers that do not reek of casual racism.

But know this. It is not my responsibility to give you the answer you obviously want. Nope, not my job.

I have spent a lifetime fielding this question that didn’t end until your curiosity was sated.

Because by asking again and again—badgering, some would say—you are saying to us, “You’re different. You don’t belong.”

My cousin answered, “Virginia.” He was born in New Jersey and raised near our nation’s capital–has lived there his entire conscious life. That’s where he’s from. My husband, also at the table? Born and raised in Cleveland. My sister and I? We’ve lived here since the mid-seventies (and were little then). None of us have accents (unless you count “Midwest” as an accent). I probably have a sum total of ten minutes of memories stored up from my time pre-America. Maybe thirty minutes worth of memories from my pre-Cleveland days. And many of the memories I do have may not genuinely be fresh, but recollections of images formed from stories told to me.

Heck, the person at the table with the most fascinating where-I’m-from-ness was my brother-in-law. Of course, he’s white, so he wasn’t asked. Ask yourself why.

So when you ask me where I’m from, and you don’t accept that my lifetime of memories of growing up in suburban Cleveland count for anything, yes, you’re being rude. And racist.

Where I’m From Is Irrelevant

The other reason it’s a racist question? It’s not relevant to the plot. You had no follow-up questions discussing anything related to whatever race we happened to be. Because while others may disagree, I’ve chosen to categorize as not-racist those questions that open conversation. “I went to India once” or “I just read a fascinating article about–” would be acceptable follow-ups, because you could have read an article about Burma, and realizing we’re Indian, would change your approach, making sure you’re sensitive to our country’s relationship with Burma. (Confession: I have no idea what India’s relationship with Burma is.) I’m all for educational, intellectual discussions. That, I would have welcomed. But for you to ask incessantly for no obvious reason? There was a reason.

When you keep asking and asking, and refuse to stop until I tell you of the country of origin of my ancestors that granted me this particular “you-don’t-belong” skin tone? You are refusing to accept that this is a diverse country that I’m allowed to call home. So stop it. Next time, I’ll say Themiscyra or Fellsmarch or Hogwarts or my favorite location from some fictional realm. Because the truth is really none of your business. And not answering doesn’t mean I have something to hide, just that I had, up to that point, been enjoying some time away from the kids.

During grad school, I did a writing exercise where we each wrote these “Where I’m From” poems. Because you were just trying to learn about us, here’s mine:

I’m from Cleveland, home of the underdog
Home of teams that always fall short but keep us hoping
Sundays spent at the high school learning Hindi
Home in time to watch the Browns play

I’m from a freedom-fighting, newspaper-owning great-grandfather,
a literary legacy for me to uphold,
A fiercely feminist mother stuck in a traditional life
Struggling to protect her daughters from the evils of western life

I’m from idealism and romanticism
The belief in happily ever after
I’m from offending my sister by calling Hindu tales mythology
And realizing where we differ
Yet retaining a hopeless optimism
An unrelenting faith in the future
Because I am, in the end, a Cleveland Indian

I’m sure you can parse out the Indian parts and the Cleveland parts. I didn’t mention going to the mall and eating Antonio’s pizza or reading Archie comics and Sweet Valley High books or watching A.L.F. and Blossom, Beverly Hills, 90210, and Guiding Light, going to Cedar Point and dancing to Madonna. But these are all part of where I’m from, and the memories that come to me when I listen to eighties music—-other than remembering the Glass Tiger cassette tape that I mysteriously lost in India—-are all set in the Midwest.

Why can’t this count for anything?

When Does Casual Racism End?

How many generations does my family have to live in the US before we count as Americans? My children were born in Cleveland, have spent their entire lives here, just like their father before them. They identify even less with India than either of us. Sure, Indian food is part of our family cookbook, but so are pork chops and applesauce (announced in the voice of Peter Brady from an episode of The Brady Bunch), sushi, hamburgers, gourmet pizza, and chocolate lava cake.

But as long as their skin tone is brown, will the only legacy I leave be the inability to belong? Here I am, in 2017, still trying to fit. It’s tiring. It’s irritating. It’s entirely unfair. It’s the definition of casual racism. Maybe here’s where representation comes in. Maybe this is why it’s so important to have a brown Aladdin in the live-action adaption. Maybe this is why we cry foul about cultural appropriation. Because while the optimist in me wants to believe that cultural appropriation just means that people are working toward accepting and celebrating what is good in all cultures, experiences like this remind me that you still don’t welcome me to the table.

Luckily, where I’m from, we don’t start fights for your casual racism. Where I’m from, my husband kindly encourages you when you bemoan the fact that, while all you wanted were sons, all you got were daughters. Where I’m from, I learned to bite my tongue, side-eye my sister, and just wait for you to walk away rather than follow you and tell your wife what you’ve been up to. See, we’re staying out of your business, not making assumptions about what your daughters’ lives must be like because they have a dad who doesn’t value them for who they are, who professes to love them with all his heart but whose views are so affected by cultural norms that they have so much farther to travel just to be seen as good enough. Heck, I grew up in such a household. But you don’t care about any of that. I just hope, for your daughters’ sake, you can recognize your biases. And maybe, if you’re really trying to forge a connection with a stranger, you think first about where you’re from. 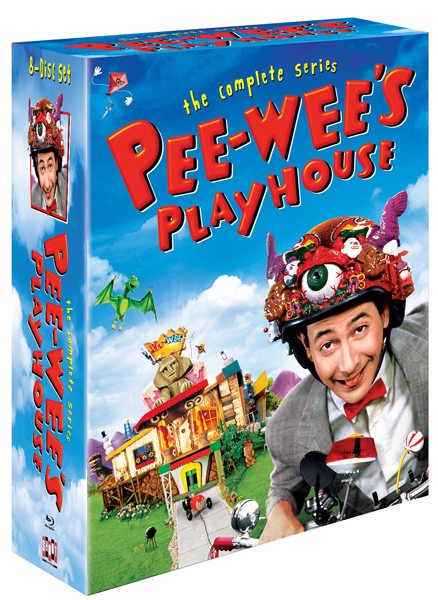