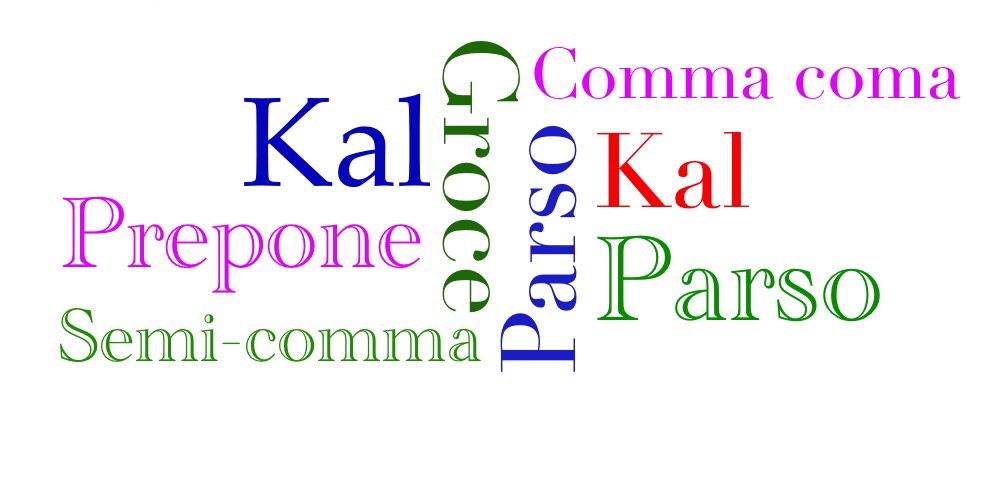 If you’re a parent, you must have realized that modern grammar and diction don’t always suffice. Even if you’re not a language nut, you may have taken to social media to recount some snippet of conversation with your child. And perhaps that’s when you realized…modern language and punctuation don’t quite cut it. Fortunately, English is a living language, so it’s possible to change it. So here are my suggestions for some things that should be things:

Looks like a comma, but more feathery. A wisp of a pause. Used between sentences by a child trying to tell you a story, knowing full well that if he stops to take a full breath, your attention may wane (little does he know it’s long gone anyhow). And although he’s never watched Mr. Smith Goes to Washington my loquacious one understands fully the concept of a filibuster and won’t cede storytelling rights to his brother, who’s waiting there impatiently for his turn to talk, making you regret teaching them to take turns because suddenly you’re in charge of policing talking rights, and you’d rather just ignore them outright rather than hear all about how he was eating his lunch, and he was sitting with Joey and Alok, and then Bob came by, but Alok was telling a story and he didn’t see Bob, and he accidentally knocked over Bob’s milk, and Bob was so angry, and Joey was laughing, which made Bob more angry, and you swear if you have to listen to anymore of their prattle you swear you’re going to scream.

The pauses are so light, in fact, that you could swear that your kid is talking while he’s inhaling, or taking such small breaths that you’re sure he’ll only stop talking when he passes out from hyperventilating.

That state of mind you enter when your child speaks in semi-commas.

(pronounced ‘groshe’)
Yeah, I’m trying this again. A much more efficient way of saying “I’m going grocery shopping”, or “I’m going to the grocery store”, or “shopping for groceries”. One syllable, and it conveys just what you’re doing. Use it!

(pronounced ‘kull’)
This is a Hindi term that means both yesterday and tomorrow (and also, incidentally, water tap, for whatever that’s worth). But how efficient is that? The definition is determined based on how you conjugate the verb. Kal we went to the park versus Kal we will go to the park. Save syllables. Which, when interacting with kids, we all know it’s useful to save our breath.

(pronounced ‘Puhr-sew’)
This Hindi term means both day before yesterday AND day after tomorrow. And just like Kal, its meaning is determined based on conjugation. And, it saves even more syllables.

We return to English now for a word that is used in India but not in America. But really, we should use it. Much like postpone, it’s about rescheduling a meeting of some sort. But, as you likely figured out from the prefix, it’s rescheduled to occur before the originally scheduled time. Because that does happen. So why shouldn’t we use a word that says just that?

How about you? Any words you wish existed? Need help coming up with a word to convey a particularly wordy concept? Because we don’t just geek out about shows and movies, you know. Some of us geek out about language, too.