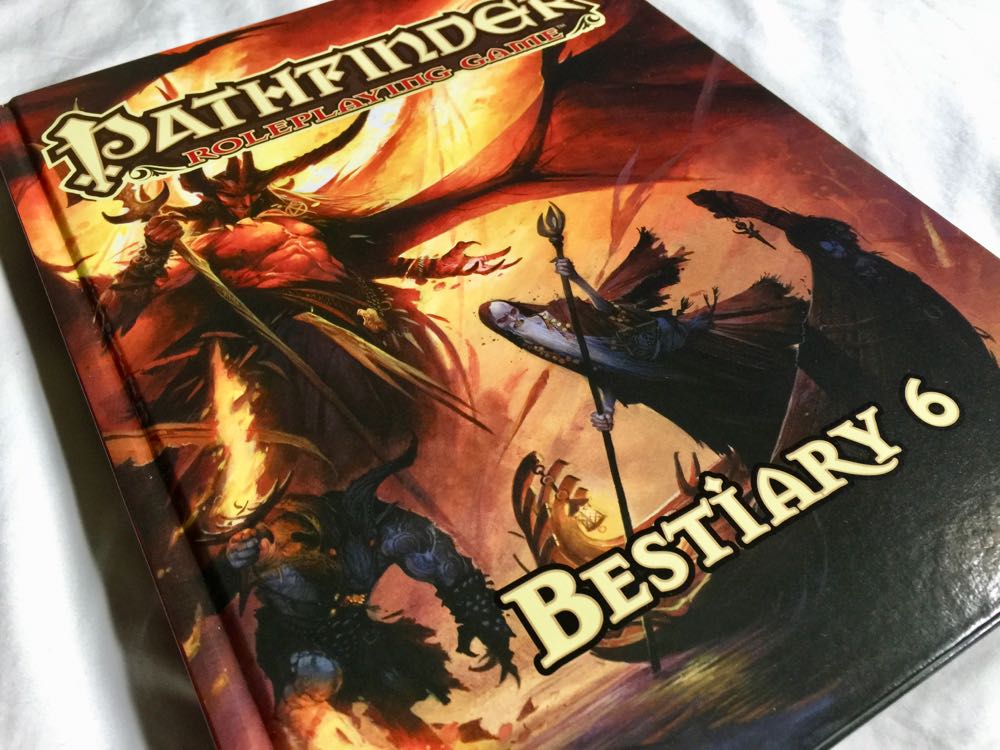 Just released, Pathfinder’s Bestiary 6 contains some of the biggest-bads ever created. Whether your characters are selling their souls to Mephistopheles, facing off with the Four Horsemen of the Apocalypse, or being all levels of tormented by CR 30 Tawil at’Umr, your players and their characters are in for some surprises in this excellent edition to the Pathfinder Role Playing Game. Bestiary 6 is available on Paizo’s site in book form ($44.99) or PDF ($9.99), as well as on Amazon, currently for around $38. Supporting your local FLGS is always a great option as well!

Bestiaries are always a welcome hardcover in our home. One of my sons has always loved, since he was around eight, just reading through the bestiaries and other monster manuals. I enjoy sitting with pride at PaizoCon Pathfinder Society tables as he rattles off facts about the creatures we’re facing (when character knowledge allows, of course). He’s recently started game mastering his own campaign, and Bestiary 6, with more than 200 new monsters, is sure to provide him some great material to work from. I know I’ve found some doozies that I already have grand plans for!

When I get these books, I usually flip through first looking at the fabulous art, then go back to read the descriptions of random monsters or some that jump out at me, and, invariably, the descriptions are laden with excellent ideas for encounters… or whole campaigns.

Bestiary 6 has some of the standards you’d expect from Paizo’s consistently excellent Bestiary line. This volume’s family of five dragons are Planar Dragons from the Outer Planes. One example is the Infernal Planar Dragon, whose breath weapon will send a character to the planes of Hell if slain. These alone make the Bestiary an excellent source of material for Pathfinder, as well as the soon to be released Starfinder Roleplaying Game in which faster than light travel involves ripping pieces of other planes into The Drift, the plane that allows for FTL travel. Imagine, as the crew hits warp, suddenly something slams onto the cockpit: “What is that?! Ahhh… an Infernal Planar Dragon! Get it off! Get it off!”

In addition to many marvelous weaker beasts, the Bestiary 6 contains one of the most powerful roleplaying foes ever created. Tawil at’Umr, a Great Old One so devastating that it would make a Tarrasque riding warrior look like child’s play. This foaming mass of bubbles and tentacles, contained within a gray robe and veil, can kill with nightmares, trap foes in the minds of others, and if killed, as an avatar of Yog-Sothoth, is instantly replaced. Have fun with that.

Some of what caught my eye in Bestiary 6 were the demigods, of which there are more new ones than in any other Paizo bestiary released. Including archdevils, empyreal lords, Great Old Ones such as Tawil at’Umr (shown above), and–Why haven’t we seen these guys yet?–the Horsemen of the Apocalypse, who, as it turns out, are not always men.

Rife with so many ideas and plot hooks, these demigods contain descriptions that practically write your campaign for you. Mephistopheles, one of the baddies on the cover, is an “artist of flattery and guile, a master of the infernal contract” who “constantly seeks to lure mortals into signing [their souls] away in all manner of complex bargains and contracts.” Mephistopheles could be the driving force in any campaign, coercing the characters in more and more convoluted contracts, and ultimately being the party’s final foe, or maybe Mephistopheles contracts the players into doing the dirty work of his ascension into higher devil-hood.

One beast that I am immediately going to put in my Rise of the Runelords campaign is the Oolioddroo demon. If you’re a game master, go read its description. It’s an awesome, flavorful creature that you can introduce to your campaign at any time, allowing you to pull off all sorts of antics. Depending on the Oolioddroo’s motives, you could do it without in any way having to derail the main campaign. Check it out. It’s just fun.

In addition to tons of wonderful beasties to add to your campaigns, the Bestiary 6 has new animal companions, new templates like the mongrel giant, cleric domains, subdomains, and favored weapons, and expanded universal monster rules. It contains whole new categories of monsters including Blights, powerful (CR 13+) sentient oozes created by ancient serpentfolk druids that quickly got out of hand to wreak havoc in their hatred of civilization. “Patient as they are cruel, blights think nothing of slowly transforming the lands adjacent to a small town or even a city to slowly starve its inhabitants of resources.” There’s certainly a module right there as the characters must determine why a town is slowly dying, ultimately facing off with a horrific blight!

There’s so much more in this tome of beastly goodness. Bestiary 6 is an excellent addition to your Pathfinder roleplaying game, or as inspiration for many other games as well. Or, if you’re like my son, it’s just an entertaining read!

Want to see some of these baddies in action? Maybe they’ll turn up at PaizoCon 2017 this Memorial Day weekend! There are still tickets available for this wonderful gaming con.