It’s no surprise by now that DC Collectibles creates some of the most true-to-source-material action figures of anyone this side of Hot Toys. I’ve been a big fan of their DC Designers series since it began, and the latest series, based on the oh-so-popular DC Bombshells covers and “nose cone art” of Ant Lucia is such a perfect translation from page to 3D, I’m convinced that DC has performed some sort of dark ritual.

But let’s address the screaming Wonder Woman in the room first, shall we?

I think, collectively, when the internet first saw this series, there was no focusing on the amazing Batwoman or perfect Harley Quinn. No, all anyone wanted to talk about was Wonder Woman and her “I want to eat your eyes with a spoon” facial expression.

When I got the box from DC Collectibles, it was the first thing I checked. Thankfully, while she still was there in all her mouth-agape glory, it had been toned down a bit. Especially when viewing the figure from an angle that isn’t head-on, it’s much less cracked-out insanity and more joy. Probably still joy at beating you upside the head with the chain accessory that she comes with; but joy all the same. A simple rotation of the figure (which doesn’t happen ever in DC Collectibles’ stock photographs) improved Wonder Woman for me 100%. She the perfect rendition of the “She Can Do It!” poster that was used for the source art. Unfortunately, while Wondy has amazing paint applications, from the blue-black highlights in her hair, to the gold piping on her blouse, to the (somewhat prone to flaking) rust details on her chain accessory, she does have a fatal flaw.

Wonder Woman’s feet can barely support her at any angle. They’re oddly sculpted and almost seem out of proportion with the character, like she decided geisha feet would be a good idea but only after her feet had fully grown. It was all I could do to get her to stand, briefly, for the out-of-box shots I took. She’s still an amazing figure, but I really wish DC Collectibles had included a figure stand. You can pick Wonder Woman up on Amazon for $35.

Once everyone got over Wonder Woman, the next focus was Harley Quinn because, well, she’s Harley Quinn. The character is more popular than a vat full of Joker Gas right now and her DC Bombshells iteration, with choice bomber jacket and aviator goggles, is white hot.

Interestingly, where Wondy’s figure is directly based on a specific cover, Harley is much more generic. Her expression is probably the mildest I’ve ever seen on a Harley figure. Though she still retains her signature pop gun (with a teeny little Batman keychain) and giant (whiskey barrel) hammer to mess up anyone who makes the mistake of calling her “normal.” And she can stand! The hammer is a bit unweildy and throws the balance off easily, but Harley can at least maintain a pose once you find one that works. The detailing on her figure is some of the best out of the entire figure wave – with painted Joker details on the back of the jacket, a playing card sticking out of her jester stockings, and a repurposed Utility Belt around her waist.

The only unfortunate thing about the figure is that her waist sculpt is sacrificed to retain torso articulation. While it’s not as big of a deal on characters like Wonder Woman and Batwoman, the joints are painfully obvious on Harley because of the double-whammy of bare midriff and less of an hourglass figure (on Ivy, it’s not as much of a problem). Unsurprisingly, she’s sold out on Amazon; but you can still get her for around $26 from third-party sellers.

Speaking of, while Ivy is a great sculpt, I was looking forward to her the least in this wave.

That stems (Ha! Get it? Poison Ivy? Stems? …I’ll let myself out.) from the fact that I’m less fond of the Betty Page-style seductress trope. It makes sense for the character; but I prefer my Poison Ivy with a bit more bite. That said, once I got her out of the package, my opinion of her changed. She’s one of those figures that doesn’t photograph well, but works wonderfully in person.

Similar to Wonder Woman, Ivy works better from slightly oblique angles. And the painted ivy tattoos that cover her body are magnificently done. I especially like that the green plastic they used is just this side of translucent, so she really has that plant-like quality. The hand sculpts she comes with are much more expressive than the others and the plant accessories lend themselves to different types of poses other than standing. Which is great, since there is no way that you’ll ever get Poison Ivy to stand on her perfectly sculpted stiletto heels. You’ll be able to recreate her nose cone art (which the deco of the figure is based on), but she simply can’t stand on her own two feet at all. It’s a shame because I love her slightly bemused expression and would love to have her face her off against someone like Batwoman. When you pick her up on Amazon, toss in a figure stand.

Batwoman was the figure I was most looking forward to in this wave.

The character is one of my favorites and the figure captures everything that makes her amazing. From her no-nonsense expression to the subtle bandit-mask makeup around her eyes, there’s an intensity and power to the Batwoman sculpt that perfectly matches with her portrayal in Bombshells. There’s a real dynamism to her sculpt, from the flowing red hair to the uniform skirt that looks like it’s just falling back into place. And her accessories are perfect. The included bat has a teeny Bat symbol on the end of it and in addition to the standard fist and accessory-holding hands, Batwoman also gets a ball and glove.

Like the rest of the line, the figure is very well-articulated. If there’s a pose you’re looking for and can’t achieve, then it’s likely because human bodies don’t bend that way. And it means you can recreate cool shots, like the bat-behind-the-head glare from Batwoman’s baseball card. She’s another figure that’s great at all angles. It wasn’t until I got her out of the package that I saw the “Gotham Knights: 52” on the back of her uniform. Nice touch, that. Batwoman is on Amazon for around $30.

Despite a few technical issues, the DC Bombshells Ant Lucia DC Designer series is the most accurate, most detailed rendition of these characters that you can get in plastic. But don’t just take my word for it – we’ve teamed up with DC Collectibles for another great giveaway. This time, it’s for the entire four-figure set of DC Bombshells: Wonder Woman, Batwoman, Harley Quinn, and Poison Ivy. Just enter your contact information below and you’ll be eligible to win. We’ll take entries through the end of April. So you’ve got till 11:59 on April 30, 2017 to enter. Good luck!

Disclaimer: DC Collectibles provided a set of DC Bombshells figures for this article. Opinions and lack of  figure stands are my own. Thanks also to Polaroid for the portable lighting studio used in the out-of-box images. 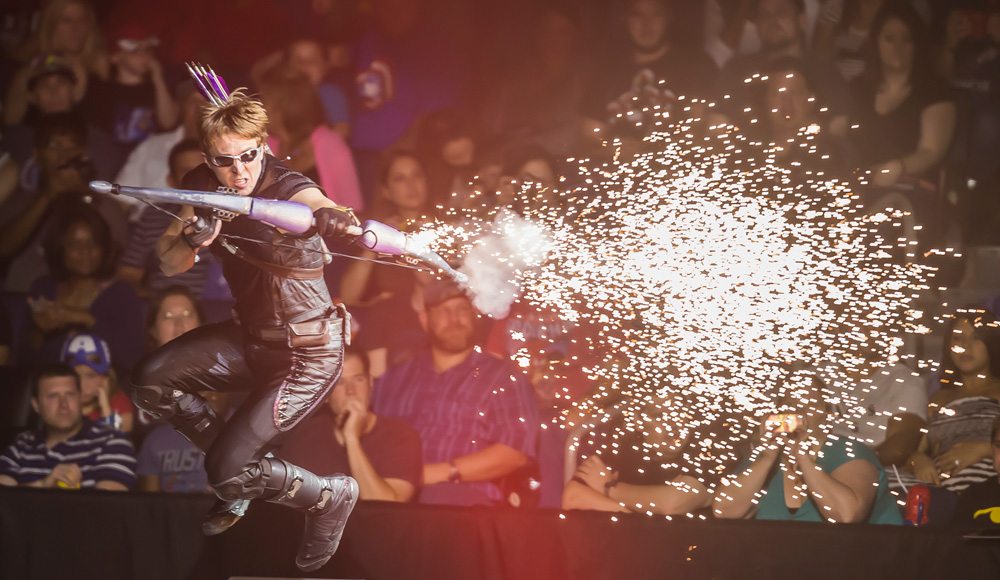