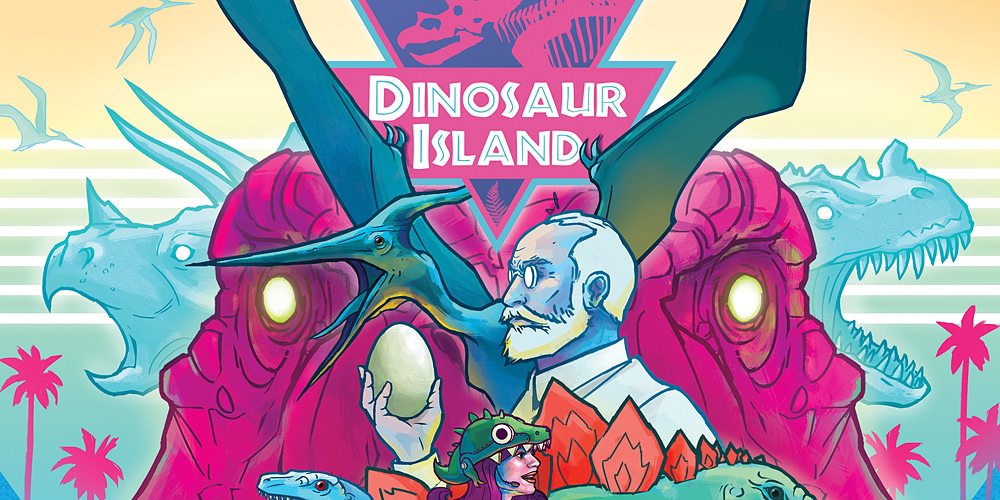 At a Glance:
Create “the world’s greatest dinosaur theme park” by researching DNA, investing in rides, and balancing out the dull herbivores against the exciting, yet risky, carnivores. Don’t forget to invest in security, or your guests might get more than they bargained for.

How to Play:
I haven’t yet received a copy of Dinosaur Island, but there’s a lot of information available on the game’s Kickstarter page. The game is already available to play on Tabletopia as well, and you can read through an early version of the rules there.

Dinosaur Island is a worker placement style game in which you can choose between various options for expanding your theme park and keeping it profitable. At the start of the game, a number of objective cards are revealed such as “have eight dinos in your park.” The number of these objectives is dictated by the number of players plus any extras added in to extend the game length. The first player to fulfill an objective takes the card and gets the victory points listed.

Each round is made up of five phases: Research, Market, Worker, Park, and Cleanup. In the research phase, players roll DNA dice, assign their scientists, increase cold storage, and procure the recipes to make dinos. The market phase allows players to hire staff, build attractions, or upgrade their labs. During the worker phase, players assign their worker pool to tasks within the lab which can allow you to create dinos. You’ll also need to keep an eye on your security level ready for the next phase. During the park phase, visitors arrive. These are a mixture of paying guests and troublesome hooligans, the number who show up is dictated by your park’s current excitement level. Your guests spread out through the park and might be eaten by dinosaurs if the park’s threat level exceeds its security, losing you victory points! Finally, you reach the cleanup phase, in which turn order is chosen for the next round, the market is refreshed, and workers returned to their starting locations. Victory points are scored during this phase too.

The end of the game is triggered when only one objective card remains unclaimed on the table. Once this happens, play continues until all five phases of the current round are finished. Players then score up their VPs and leftover money–the player with the most VP at the end of the game is the winner.

I was particularly interested in the scalable game length mechanic which will allow you to choose how long you want the game to last, from one hour up to 2.5 hours regardless of how many players are involved. The plot twist cards also sound like they will help keep the game interesting throughout multiple replays–although if there aren’t “storm hits the island” and “rogue employee steals your research with a can of shaving cream” cards, then I’ll be very disappointed. Some of these plot twist cards are revealed at the beginning of the game and stay in effect throughout, others are revealed when objective cards are successfully resolved.

Verdict:
Let’s acknowledge the elephant in the room, shall we? Yes, Dinosaur Island is heavily (HEAVILY) influenced by a certain 1990s blockbuster movie. After my initial excitement on reading about the game, my biggest concern was whether or not the developers would be slapped with a Cease and Desist before production could even get started. I raised the issue with the developers and was assured both that their legal team have vetted it, and that the game was inspired more by the 1993 MECC game DinoPark Tycoon (why have I never heard of this before, seven-year-old me is deeply upset that this existed and she didn’t know about it) than by the other franchise we’re all thinking of. That being said, I do wonder if the legal team over at Big Dino Franchise will feel the same way.

I love the look of this game. The vivid ’90s technicolor artwork is right up my street, and there are dinosaur meeples. DINOSAUR. MEEPLES. The developers had me hook, line, and sinker just at that. The campaign is already well funded with over 25 stretch goals reached (including more dino meeples!) and more yet to come. The rules suggest a great balance between the strategy of worker placement and the fickleness of dice rolling, plus the whole thing has the feel of management simulation games like Theme Park and Airline Tycoon–a genre of video games I have loved since childhood.

I can’t wait to get my hands on this one and build my very own dinosaur theme park. Let’s just hope I can keep the velociraptors under control…