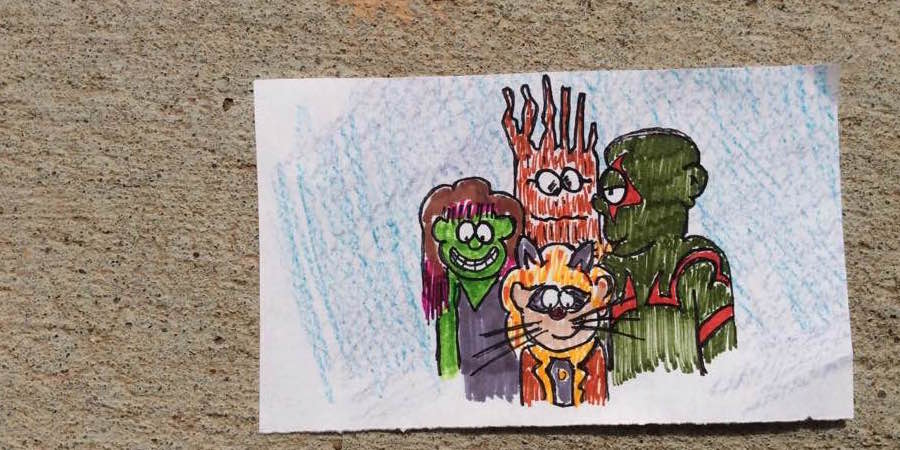 People seem to talk so much about what and whom they don’t like these days, I think its time to talk about love!

No, not that kind of “love.” I’m talking about the love of life…true happiness for the simple stuff. This kind of love, the embracing of the seemingly meaningless things that make us happy with such unashamed, silly passion, it is more than just happiness…it’s Geekiness!

The best thing about this type of love is it isn’t just reserved for those of us who have proudly let their “geek flag fly,” as we say. Pure geekiness, or “geeking out” on something…anything…is for everyone! All ages. All beliefs. All over the world, people can come together over “the little things” that bring them and us happiness.

This is why I’ve decided to devote some writing time to jotting down my own geeky happy places, as well as encouraging others to take some time in their own. For many of us parents, whether we are openly geeky or not, we know Happiness and Geekiness are often one in the same.

Geekiness is cosplaying together as a family.

Geekiness is finding a comic or book in a used bookstore…and discovering it’s signed by the author.

Geekiness is running across little Lego pieces or Nerf gun ammo in perfect condition during a walk in a park.

Geekiness is stumbling up a band or musician so original; you wish you were the first one to discover them. Oooh, check out The Dead South!

Geekiness is seeing a random person on television or in a movie wearing the same fandom shirt you own.

Geekiness is hearing your birthday or hometown mentioned in movie, and successfully fighting the urge to point it out to everyone around you in the theater.

Geekiness is opening a “blind pack” of collectibles and getting the figure you most wanted on the first try.
Usually, it’s Harley Quinn.

Geekiness is watching the first trailer of a long-awaited movie for the first time, and not being able to stop giggling.
“Chewie, we’re home!”

Geekiness is spending an entire afternoon sitting on the carpet with your kids build Lego worlds.

Geekiness is a Fanart mash-up so perfect, you think is was created just for you.
Gotta love Brian Kesinger!

Geekiness is when your favorite artist or author follows you on Twitter, and actually reads and likes your Tweets!

Geekiness is when your teenager borrows your old fandom or concert shirt to wear to school, because it is “too cool!”

Geekiness is watching a favorite animated movie with friends projected on a big sheet in your backyard.

Geekiness is helping your kid make their superhero hide out with pillows and some blankets and pillows stretched between chairs.

Geekiness is the perfect music play list for your day’s adventure.

Geekiness is making friends with a perfect stranger, because you hear them quoting a favorite movie you always quote.

Geekiness is going to events at your favorite comic book shop with your kids, and everyone is excited.
Free Comic Book Day, anyone?

Geekiness is the smell of a bookstore.

Geekiness is finding that perfect prop piece or accessory when working on a costume.

Geekiness is finding a perfect geeky Valentine or birthday card for your spouse or kids…or getting one from them.

Geekiness is the mixture of pride and a little sadness when your child insists they can read chapter books “all on their own.”

Geekiness is you and your children — or even parents — sharing a same fandom.

Geekiness is doodling on the cover of a notebook or the tips of your sneakers.

Geekiness is being told you look like a favorite fictional character by someone who doesn’t even know you.
“That lady on ‘Torchwood’ looks a lot like you.”

Geekiness is curling up with a favorite book on a cold night and enjoying a cup of tea after the rest of the family is in bed.

Geekiness is reading a joke so perfect in a comic strip, it stays on your refrigerator for years and makes you laugh every time.
I’m talking to you FoxTrot and Calvin & Hobbes.

Geekiness is getting your hands on that rare variant comic book cover you’ve been wanting, at cover price.

Geekiness is sharing that giant tub of popcorn at the movies, and taking that free refill home.

Geekiness is a home filled with dragons, pirates, ninjas, Jedi, hobbits, and superheroes hidden in every room.

Geekiness is going through your bag of free swag from a comic or sci-fi convention, and everyone getting something they want.

Geekiness is knowing there are other geeky pleasures out there you haven’t yet discovered.

Get out there, and find your own geeky happiness today!