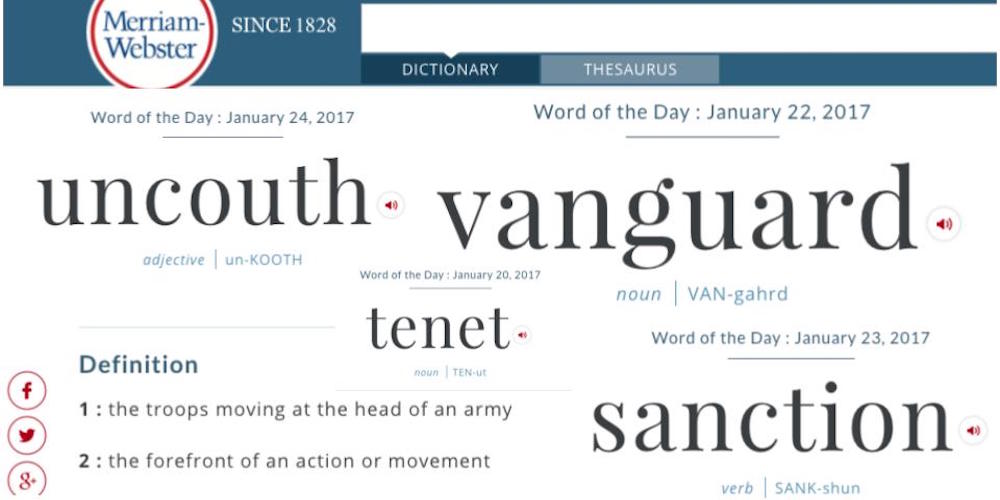 I have subscribed to the Merriam-Webster Word of the Day mailing list for quite a while now, and these days, I’ve started to wonder if they’re getting a little political. Of course, I’ve been known to stare at wallpaper or floor tiles until the random lines coalesce into faces and other shapes, so maybe it’s just me.

In the past, Merriam-Webster has been known to offer up relevant, seasonal words of the day—this past December, they defined dreidel (Dec 24), wassail (Dec 25), and Kwanzaa (Dec 26).

Every day, I receive an email message that lists the word, a definition, a bit of history of the word, its usage and origins, and a couple of examples of its usage. Of the two examples, the second sentence tends to be a rather recent instance of usage in the media.

Which makes sense, of course. Words appear in print, the powers-that-be realize people may not know what they mean, and they define it. It doesn’t serve, after all, to have a word-of-the-day list that rehashes words like “word” and “day.”

So let’s look at a few of the recent words, and see if we can notice a pattern:

Jan 20, 2017 –
tenet – a principle, belief, or doctrine generally held to be true; especially : one held to be true by members of an organization, movement, or profession

Jan 23, 2017 –
sanction –
1. to make valid or binding usually by a formal procedure (such as ratification)
2. to give effective or authoritative approval or consent to

Jan 24, 2017 –
uncouth –
1. strange or clumsy in shape or appearance : outlandish
2. lacking in polish and grace : rugged
3. awkward and uncultivated in appearance, manner, or behavior : rude

Okay, so Jan 21, the word was xylography, the art of making engravings on wood, especially for printing. And, going back,

Jan 19, 2017 –
whimsical
1. full of, actuated by, or exhibiting capricious or eccentric and often sudden ideas or turns of the mind : relating to whims
2. a: resulting from or characterized by whim or caprice; especially: lightly fanciful,
b: subject to erratic behavior or unpredictable change

Full disclosure: none of the example sentences for any of these words was from a recent news story that covered the election, the inauguration, or the Women’s Marches. They may well have appeared in news stories, but the entries did not cite any of these examples. So that means either M-W is being subtle, or so subtle as to not have any such intent.

Maybe this string of words seemed to speak to the current political climate only in my head. Maybe I’ve spent far too long not actively working on new material (good gravy, I have really got to start writing a new story stat!) that I’m imposing patterns on everything I see. Whatever the reason, I’m putting this theory out there. What do you think? political statement or coincidence?

2 thoughts on “Is Merriam-Webster Getting Political?”