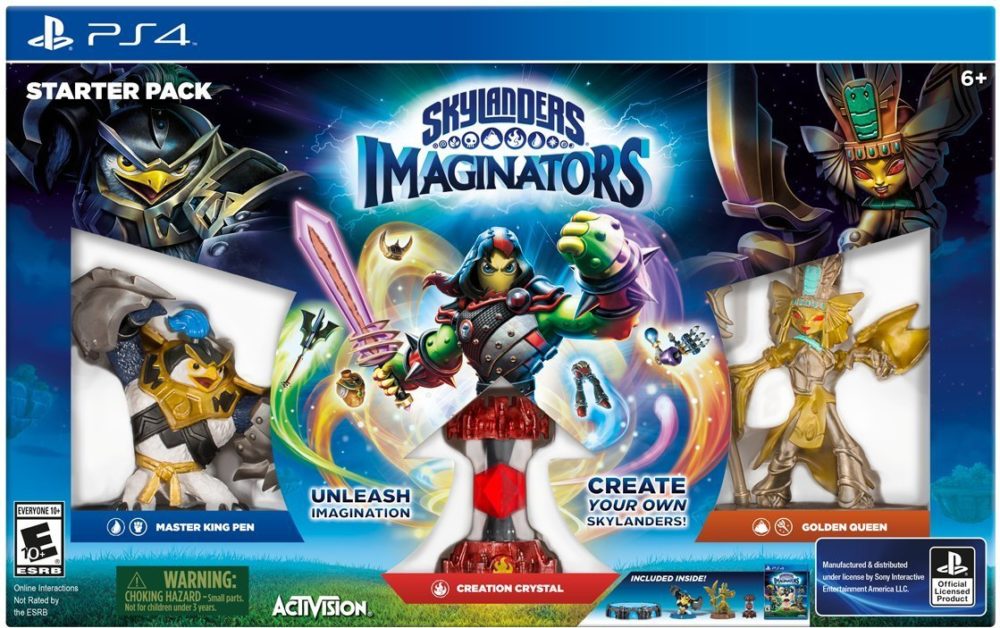 With a good bit of play time under our belts now, I can reassure you–Skylanders Imaginators is among the best of the series. My long-time Skylanders fan son agrees; it’s his favorite. If you’re on the fence about picking up one of the continuing great deals on the starter pack before Christmas, go for it. This game has gotten more play in my house than anything else in recent memory.

Imaginators offers all the things you love about the previous games. One of my favorite things about it is that the gameplay is easy enough for my son, who was four when he started with Skylanders, but also interesting enough for me to play with him. That’s a rare combination in any sort of game. And if you haven’t played any of the previous games, it’s OK to jump right in here without having to go through the first six.

Level design and gameplay have stepped up a notch over the previous games. The one shortcoming for an adult player is that movement can drag. You’ll be longing for a “run faster” button. But this also can depend on whether you’re playing with someone else. My son is an explorer, so he spends a lot of time wandering, and I spend a lot of time following or trying to get him to go a different direction.

As far as story, as usual, it’s all about Kaos again. He has managed to take control of the mind magic that created all of Skylands. He’s using it to create an evil army of Doomlanders, whom you now have to fight.

Using the same powers, however, you get to create your own Skylanders.

This is the part of the game that I love the most since Swap Force, which let you combine two Skylanders into a new one. Now you can use the new Creation Crystals to design your own Skylanders and bring them to life in-game. To get started, you put a new Creation Crystal on the portal, which launches you into the character creator. You can choose from ten battle classes, but this is the one permanent decision, so choose carefully. You can also change how they look, the weapon variations, armor, their voice, and their catchphrase. As you play through the game, you’ll be able to unlock new equipment for your creation.

The one catch to all of that is that, with this game, Skylanders has introduced microtransactions. One thing I’ve always appreciated about Skylanders games is that even though you can buy character after character, you could conceivably play through the game with nothing but the starter set. And you still can, and you can play through without the microtransactions to purchase treasure chests for extra gear. But depending on what else they play, this may be the game where you have to have a discussion with your kids about these types of purchases.

The only other real down side is that, with so many possibilities, your kids are going to want a stash of Creation Crystals to create new Skylanders, as each crystal can hold only one.

Beyond the characters you create, the new character toys for this game are called Senseis. Thanks to the sheer joy of creating your own, we’ve gotten fewer requests for more Senseis in favor of more Creation Crystals. There are levels that each element type of Sensei can unlock, so to play those, you’ll need those characters, but it’s bonus content, not the central game.

If you’d like to add in some nostalgia for yourself, Skylanders has given you that again as well. You can play the game with Crash Bandicoot, who can become a Skylander. (As a result of this and curious kids, I now know a lot more about the actual bandicoot!) If you play on Playstation 4, you can buy him in the starter pack. Otherwise, you’ll need the Thumpin’ Wumpa Islands Adventure Pack.

Now where to buy? The game is available for Playstation 3, Playstation 4, Wii U, Xbox 360, and XBox One. As of this writing, they are only available from third parties on Amazon. They do have many of the Senseis on sale, though, and available with Prime shipping. (Remember, these toys are not platform-specific, so ignore it when websites call them “Wii U figures” or similar.)

There are, however, Starter Packs still available at Toys R Us for $39.99 (MSRP is $74.99). You can buy online or find them in-store. The same deal is available at Target with free shipping.

One last note–if you’re an Instagram user, follow Skylanders there as their “12 Days of Chirps” offer you Skylanders gifts.

Ladies, Can We Talk (About Wikipedia)?

“The Curse of the Brimstone Contract:” A Steampunk Adventure: THE END