Back in early 2015, I provided a simple guide for gamers who had recently acquired the New Nintendo 3DS XL. It’s one of those odd posts that still continues to see a steady trickle of traffic, which leads me to believe that—against all odds—I may have actually managed to do something right.

While it’s seen a limited release here in the States, most notably in the Animal Crossing: Happy Home Designer and Pokémon 20th Anniversary Edition bundles, the holiday release of the Mushroom Kingdom Edition New Nintendo 3DS has caused quite a stir–due, at least in some part, to its attractive $99 price point.

Available in white and, for the first time on this side of the pond, black, these systems have already become highly sought-after, selling out instantly each time new stock appears. Now, call me a naïve fool, but I like to believe at least some of these units were purchased by passionate collectors and diehard Nintendo fans… as opposed to eBay speculators trying to make a buck on the resell market.

For the former—specifically, those who plan to do the unthinkable and actually play video games on their shiny new handhelds—I’ve compiled a similar list to help you make the most of the New Nintendo 3DS. But first, let’s take a look at what makes the New Nintendo 3DS different from all other 3DS products. 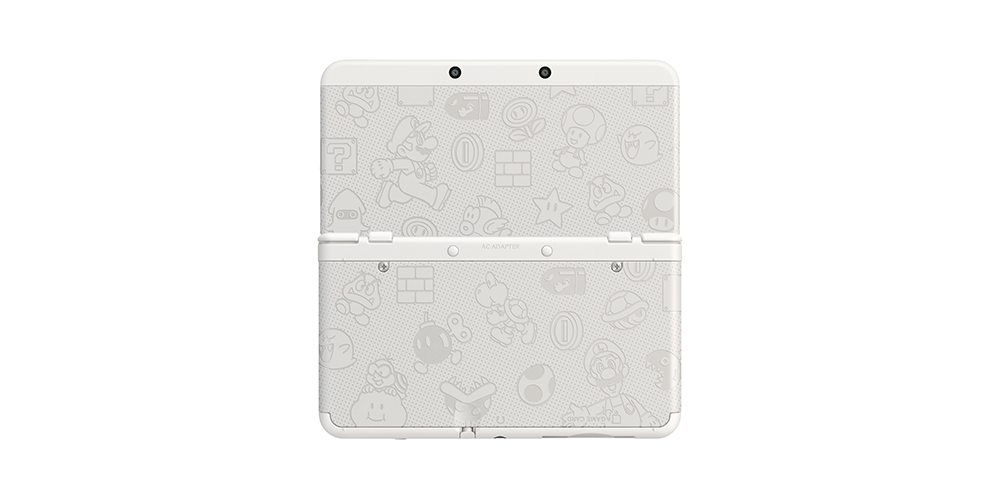 Getting to Know the New 3DS

To get a handle on what makes the New Nintendo 3DS special, we need only look at its name. First, notice the “New” part; that signifies that this iteration shares the same hardware updates as the New 3DS XL. This means it sports features like a faster processor, better 3D eye-tracking, a pair of additional shoulder buttons, a second analog control nubbin, and built-in NFC functionality for use with amiibo. On a related note, this also means your new New Nintendo 3DS can play those thorny exclusives that were incompatible with the older gen hardware. Of course, this isn’t exactly an expansive array of content. (It’s mostly limited to Xenoblade Chronicles 3D and SNES ports available via the eShop.)

There are, however, a couple of very interesting ways in which this system differs from its handheld brethren. The first is its colored face buttons. The A, B, X, and Y buttons are red, yellow, blue, and green, respectively, which is a nice nod to the classic SNES controller. The second, and most compelling, is its customizable system shells. These faceplates” can be easily removed and replaced using nothing more than the “wrench end” of the system stylus, for the top plate, and a tri-wing screwdriver, for the bottom piece.

If you’ve ever thought of trading in an old Nintendo handheld to get some new, special edition system with minor superficial differences, the New Nintendo 3DS is for you. Faceplates are a system customizer’s dream come true, but be aware that they don’t always come cheap, and this means things can get expensive fast.

Not surprisingly, the biggest difference between the New 3DS and New 3DS XL is size. While the New 3DS XL is pretty similar to the original XL with regard to footprint and screen size, the New 3DS sort of sits in an interesting middle ground between the standard 3DS and XL. Specifically, both the top and bottom screens, while obviously not eXtra Large, are larger than those of the original 3DS: 3.88″ and 3.33″ up from 3.53″ and 3.02″.

And with those specifics out of the way, let’s talk about accessories and other extras. 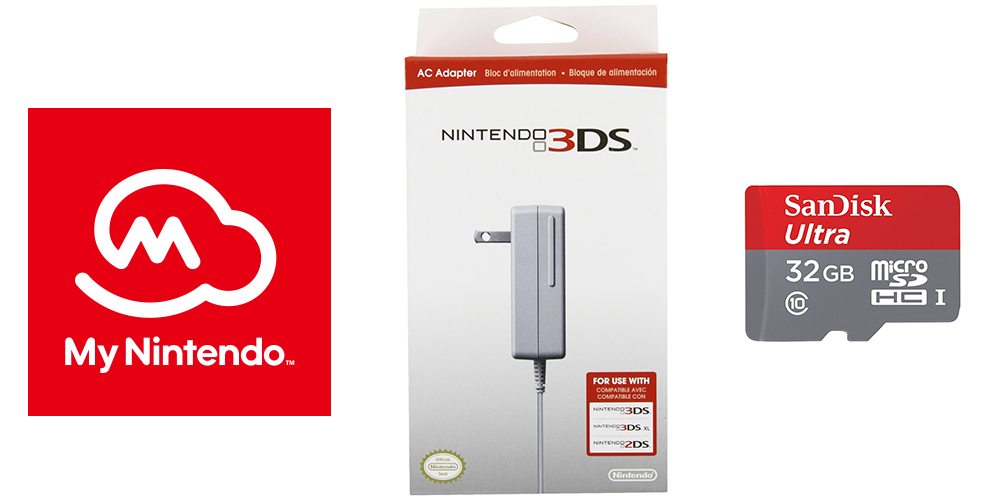 Your choices, then, are as follows: buy an official Nintendo charger or buy a knock-off. The legitimate Nintendo product will run you $9-10, while you can find a generic solution for around half that.

So what does an informed consumer need to know? Mostly just that the entirely 3DS line—from the original 3DS and 3DS XL to the 2DS and the New 3DS systems—all use the same charger, and it also happens to be the charger configuration used by the old Nintendo DSi. Moreover, don’t discount the idea of picking up a USB charger or two for traveling; they are cheap and oh-so-portable.

I include the Nintendo Account here as a must-have for a couple of reasons, the chief of which being that the new loyalty program rewards you not only for things like digital game purchases but also playing mobile titles like Miitomo and (conceivably) Super Mario Run.

For adults, the creation of Nintendo Accounts is free and easy. For kids, it is a little less so.

Users under 13 years of age are limited to “child accounts,” and these must be set up by an adult user through his/her own Nintendo Account. The process itself is pretty straightforward, with the sole sticking point being that a one-time transaction of 50 cents will be charged to a credit card associated with the parent account. You can, however, create multiple child accounts (up to a maximum of 5) without having to rack up multiple confirmation charges.

One of the changes between the 3DS/3DS XL and their New analogs is the move from SD to Micro SD memory cards. And, whether you’re migrating your data from an older system or setting this up as your first ever 3DS, you’ll likely want something a bit more spacious than the stock 4GB card that ships with your system.

Supported capacity maxes out at 32GB, which means a brand new card should only set you back about $10. 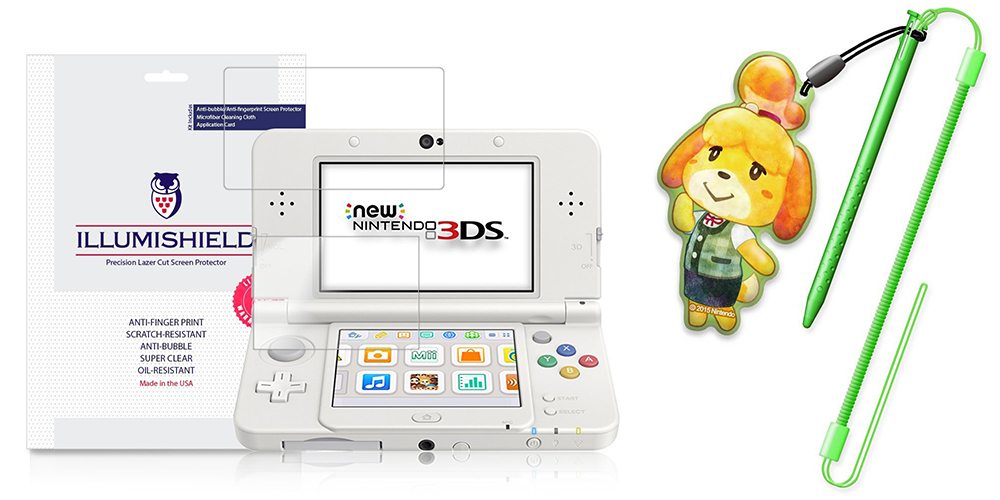 I am a firm believer in screen protectors, especially for handheld gaming systems. My go-to for Nintendo products is typically HORI screen covers, but these don’t appear to be available domestically and thus a set will run you around $13 here in the States. If you’re looking for a cheaper alternative, iLLumiShield sells a three pack of top screen and touchscreen covers (that’s 6 screen covers in all) for around half that.

I’m also a firm believer in the power of the noble wrist strap. Drop damage is the quickest way to kill a pricey portable, and having a little something extra to hold on to has saved me from disaster on multiple occasions.

The best thing about a strap is practically anything will do. Leftover Wii Remote wrist straps are a good alternative, as are camera straps. If, however, you want to go a little flashier, there are a wealth of mascot straps and even leash styli (a specialty stylus connected to your system via an elastic band) available for purchase.

Personally, I’m using this Circle Pad Cover set on my new black system. It comes with multiple thumb pad covers you can swap out on the fly, and it includes a mini-finger strap that can hold two your two favorite pads for on-the-go safety and convenience. 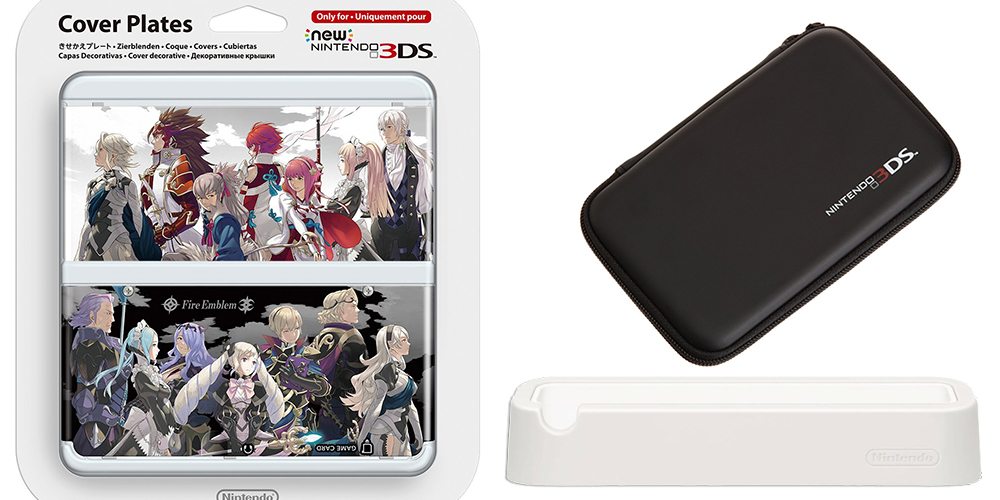 For me, the best feature of the New Nintendo 3DS is the aforementioned swappable faceplates. Strangely, unlike the previous North American releases, the new Mushroom Kingdom systems don’t ship with the traditional blank black or white covers. All you get is the embossed Mushroom Kingdom plate, but, on the bright side, these embossed, matte finish covers happen to be some of the best I’ve seen.

You can purchase additional faceplates directly from Nintendo, but online specialty retailers and even Amazon tend to have a wider selection. Prices vary—a lot—so keep an eye on your favorite designs for sales and specials, and don’t forget to comparison shop!

If you’re in the market for one of those swanky vertical charge cradles for your New Nintendo 3DS—and, trust me, you should be—you can pick up the white stand for around $10 directly from Nintendo. Other colors like black, green, and pink are also available via import shops like Play-Asia.

While the humble wrist strap is my go-to for day-to-day system safety, I see cases and covers as the ultimate travel accessory. Whether it’s in your workbag or your carryon, a properly sized New 3DS case or sleeve can help protect against the unexpected bumps that so often come with commuting.

While the New Nintendo 3DS case market is wide open in Asia, we have painfully few domestic options. For the most part, we are limited to “universal” cases that are more befitting the larger New Nintendo 3DS XL.