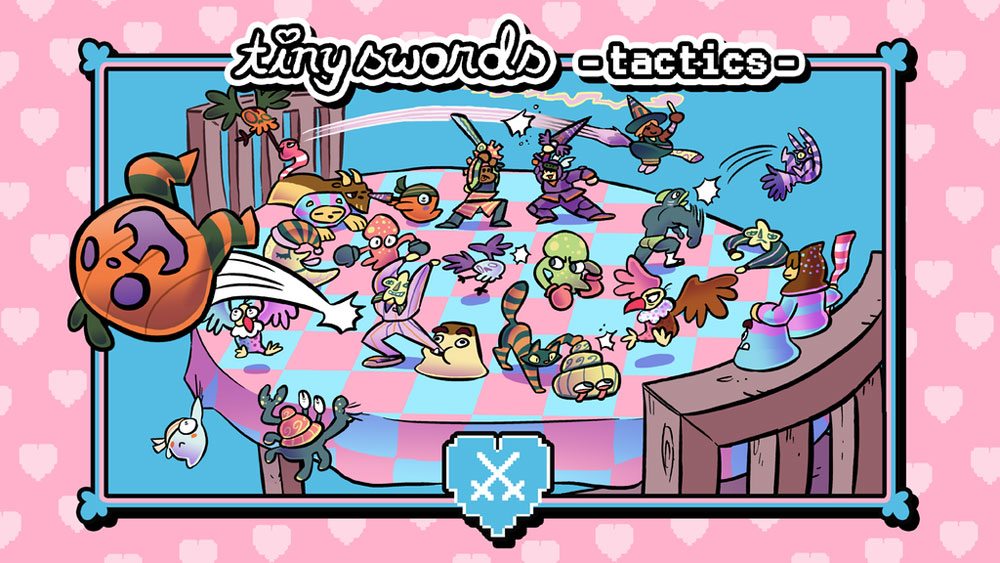 It’s an all-out brawl! Try to stay connected to the Heart of the Battle, while shoving all of your opponents far away (or off the table entirely) in the adorable Tiny Swords Tactics.

At a glance: Tiny Swords Tactics is a cute brawling game for 2 to 4 players, ages 10 and up, and takes about 30–60 minutes to play. It’s currently on Kickstarter, with a pledge of $30 for a printed copy of the game (or $15 for a PDF version). The game is kid-friendly and has really cute artwork, and I think could be played by kids as young as 8; note that there is player elimination, so some players will be knocked out and have to wait for the game to finish.

Note that my review is based on a prototype, so photos will not reflect final game component quality.

Tiny Swords Tactics will include:

The player tiles have a team icon on the back and a character on the front, along with its name, speed, team icon, and a small hand symbol for rock, paper, or scissors. Each team also has a captain, which has the names of its special abilities, but those abilities are detailed on the reference cards rather than on the tiles, which are fairly small, a little over 2 inches square. The 8-bit illustrations are really fun, with names like “Sweet Slime Jr.” and “Spooky Knight.”

The rulers are simple cardboard pieces the size of 3 tiles put together, to make it easier to move things around on a grid, since there is no board for this game—you just play on an imaginary grid, and the entire tabletop surface is the play area. At the higher level reward tiers, you can even get a custom tablecloth (the one used in the video) that has a pink and blue grid printed on it, so that you can do away with the rulers.

The goal of the game is to eliminate the other players by knocking out their captains or eliminating enough of their tiles that they cannot have two face-up tiles at the end of their turn.

Each player takes a team and a reference card, and the Heart of the Battle tile is placed in the center of the table. (The second Heart tile is just a spare.) Everyone but the first player gets a Bonus token which can be spent once to get an extra action during a player’s turn.

Then in turn order, players place tiles one at a time onto the table, attaching them so that everything is connected to the Heart (orthogonally, not diagonally). Once all the tiles are placed, the battle begins!

On your turn, you get two actions, which can be spent to Move, Fight, or Flip. You may do the same action twice if you want, and you may use the same tile or two different tiles for your two actions.

Move: Each tile has a speed printed on it—that is how many spaces it can move with one action, and you may change directions while moving. Moving tiles push tiles around as they move.

Fight: If you fight a tile, you will do damage to it and shove it away from you. Each tile has a rock, paper, or scissors icon on it. If you’re stronger, you do two damage; if you’re the same icon, you do one damage; if you’re weaker, you do one damage and also take one damage—all damage is indicated by placing damage tokens on the tiles. Then, you shove the tile away from you in a straight line one space per damage token. Tiles that are shoved all the way off the edge of the table are eliminated.

Flip: You may flip one of your tiles over. Face-down tiles discard all tokens on them, and they cannot move or be moved, fight or be fought, so they will prevent movement in their direction.

Note: at the end of your turn, tiles that are connected to the Heart with diagonal connections will take one damage. Tiles that are not connected to the Heart at all are knocked out and will be removed from play. Also, you must have at least two face-up tiles at the end of your turn, or you are eliminated. Finally, if your captain is knocked out, you are also eliminated. When one of your tiles gets KO’d, you get a bonus token which can be spent for an extra action on your turn, and you may have up to 2 of these tokens at a time.

That’s basically it: you win if everyone else is eliminated.

There are advanced rules, too: crash damage from pushing a tile into a face-down tile, which also turns face-down tiles face-up again. This can even allow for flipping the Heart of the Battle face-up and pushing it around.

Finally, each of the captains has two powers that can be used if the captain is face-up: one that applies to the captain, and one that affects the team’s other tiles. For instance, the Spooky Captain has a Jumpscare ability: flip up all face-down tiles touching it and add 1 damage token to each without pushing them away. The Spooky Captain’s Ghostwalk ability lets all of the Spooky monsters to move through tiles without pushing them, and then only shove 1 space if they need a spot to stop moving.

Tiny Swords Tactics is a pretty fun free-for-all. Designer Brian Wolf says that it was inspired by Super Smash Bros., and I can definitely see that: it can look a bit chaotic at first (particularly when the field is so crowded) but there is a lot of strategy involved, too. It’s important to know when to flip a tile down and get rid of damage (and to prevent a strategic shove), but if your tiles are face-down then it also limits your abilities as well.

One of the keys to the game is the fact that the more damage you have, the further somebody can push you. Ideally, you attack somebody who has a weaker rock-paper-scissors symbol than you, because you will add two damage tokens with one attack. But even so, if a tile has enough damage tokens on it, you can shove it pretty far with any of your tiles, even if you take a damage yourself with a weaker tile. With enough damage tokens, you can fight somebody and shove them completely off the table.

Of course, once you’ve been disconnected from the Heart, you have some tough decisions to make: if the tile has a good speed, you might be able to run back, and then flip over to get rid of the damage. But you might be so far away that you would have to spend both of your actions just to get back—in which case you’re still vulnerable to being shoved again, and this time it will be even farther away. Knowing when to cut your losses is important, but you also only have 5 tiles total, so you can’t afford to ditch every one that gets pushed away. But, as I found, it’s also really important to know which of the three rock-paper-scissors symbols you and your opponents have in play, because if you have no more “paper” left and your opponent has a couple “rocks,” things are going to get fairly difficult for you.

Tiny Swords Tactics is a really fascinating tactics game and, despite the title, does not actually carry much over from Wolf’s Tiny Swords game, as far as I could tell, other than that it still has a rock-paper-scissors mechanic included—but that’s used quite differently. The introduction of the captain abilities adds some asymmetry, so that it becomes very important to know your all the team abilities and how to use yours to the best effect.

The one downside–and I’m not sure it’s avoidable in a game of this type—is the player elimination, simply because it means some players will be stuck sitting and watching while others finish the game. In a 4-player game, the first one eliminated may have a long time to wait. It’s compounded by the fact that in this game the weakest tile often makes for the most tempting target: you’re much more likely to be able to knock a tile too far away to reconnect when it already has a lot of damage tokens on it, but that amounts to beating up on the weakest player and goes against the usual strategy of attacking whoever’s in the lead. Still, it may come down to your gaming group’s individual styles, whether everyone gets eliminated at about the same time, or if everyone tends to take out one player first before moving on to the next.

Overall, I think if you like battle games and cute artwork, Tiny Swords Tactics is worth checking out. There are only about nine days left in the campaign, though, so don’t delay! Visit the Kickstarter page for more information. 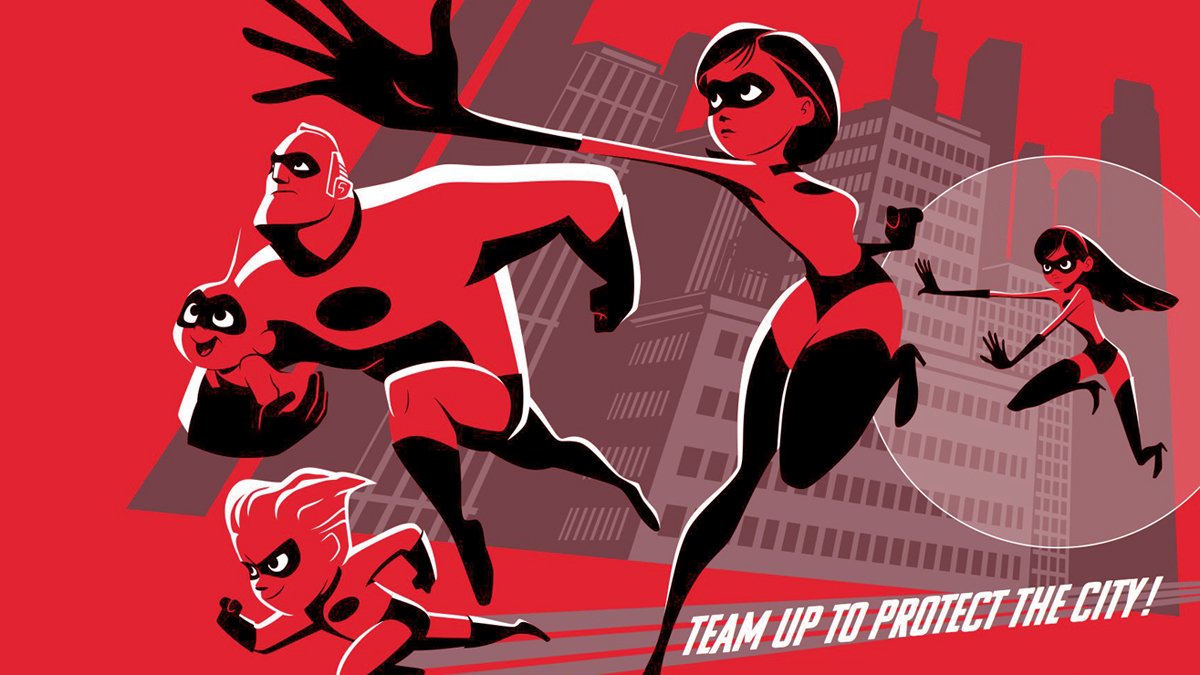