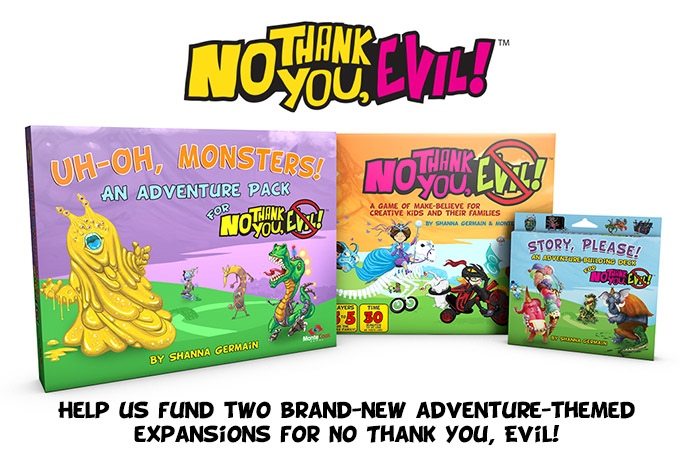 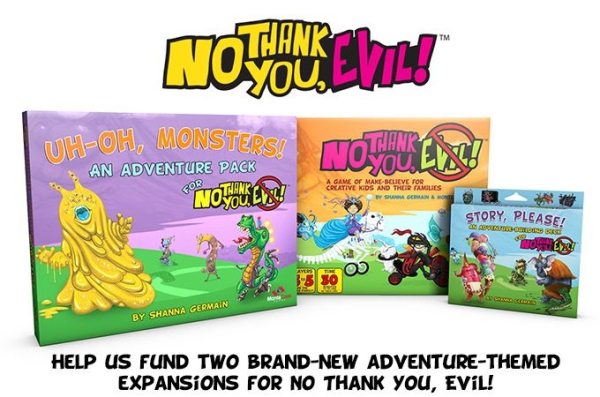 It’s not easy to find a paper & pencil roleplaying game that simultaneously engages the gradeschooler, the teenager, and both parents. Last year we found that rare beast with Monte Cook Games’ “No Thank You, Evil!” RPG. It has been an oft-requested thing to play in our household. Now MCG has two new expansions up on Kickstarter.

The deck itself is comprised of 100 oversized cards, divided into noun-y categories like Persons, Places, and Twists. These allow the storyteller to quickly pull together either an entire short adventure (which is the usual kind when you play with young kids) or add elements to a preexisting story idea. 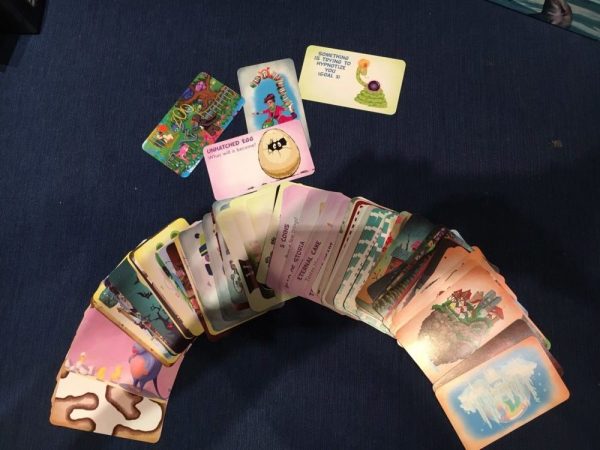 Some of the cards have information on both sides – there isn’t a generic “back” to them, which is a good call. Having a story character’s portrait on one side, to show the players, while containing stats on the other is a good use of space. I especially like the maps cards: one side has generic “cave dungeon” style graphics that can be rearranged into a multitude of configurations, while the other side has full maps for things like a simple spaceship or the inside of a giant purple Whosiwhats beast (probably not its given name).

On the downside, if you own the deluxe version of the original game you will definitely see recycled materials here. Princess Strike’s Bowling Ball invitation is here as a card (albeit blank), as are storyteller characters already listed in the starter adventures or the main book (e.g. Lucy Lawful, Mister Oddswallow). A few of the items are also perhaps less-than-inspired: two of the “Stuff” cards are “Two coins” and “Five coins”.

We tested the game by pulling one card from several piles and got Paige Marker (librarian Person), Unhatched egg (item from Stuff), At the zoo (Place), and “Something is trying to hypnotize you” (the Twist). My husband then created a story about a missing egg from an exhibit at the Library of Novel Ideas. We had a grand time tracking down the missing egg from both a greedy breakfast restaurant chef and a hungry snake.

Afterward, my husband showed our youngest the cards. She was immediately interested, wanting to read each one. She also picked up on the idea of pulling one of each category for story creation. I could see them as a big help to improving her GMing – especially the narrative “Twists” cards.

In all I feel that “Story Please! The Adventure Building Deck” is a useful resource for time-short parents or unfocused kids wanting to improve their “No Thank You, Evil!” sessions. For the oversized cards, the $20 pledge price is reasonable. I hope that future stretch goals in this last week of the campaign will add never-before-seen bonus cards.You can still get in on the Kickstarter until November 10. You can never have too many elements to throw into the imaginative realm of Storia.

GeekDad Puzzle of the Week: Gear Up

What We Learned Today: How to Eat a Triceratops