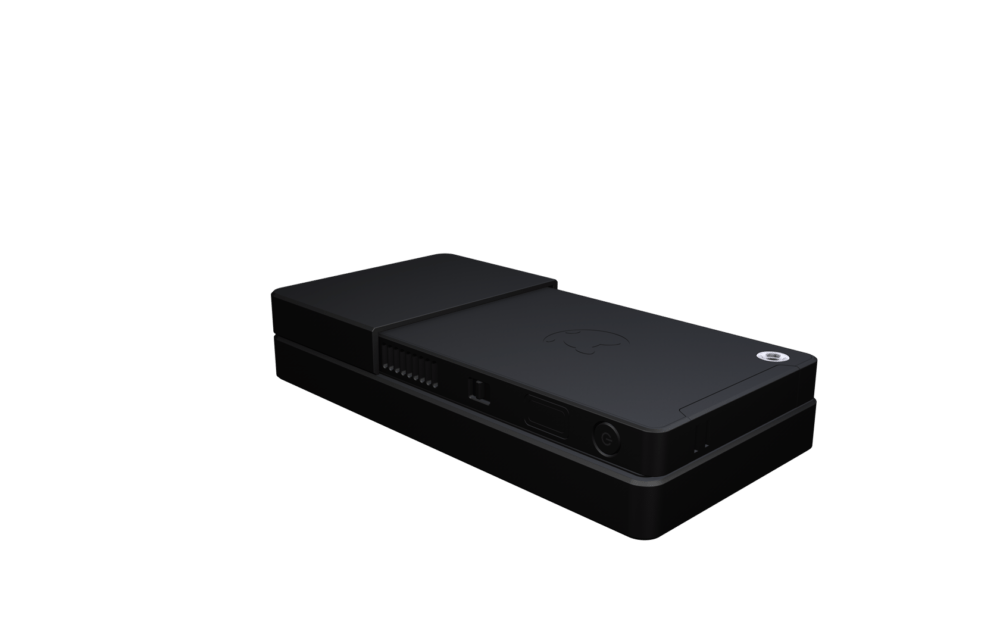 The Kangaroo Pro is a portable desktop, a PC loaded with Windows 10 software priced at $169 that comes with a docking deck that provides extra battery life and ports to allow attachments via HDMI, USB, and VGA.

It also has a micro-SD card slot and Bluetooth technology, so it can be paired with wireless keyboards and mice.

Why is it called portable? Because it’s about the size and weight of your average paperback book. Sorry about the resolution of the photo below, but the comparison it showcases is apt. The question then becomes: what can you do with a desktop that you can pick up and toss in your backpack that you can’t do with other computing devices?

The answer is that the Kangaroo is well-suited for specific situations, though it may not be the only computing device that can be used for these functions.

First the basic specs: Windows 10 64-bit Home edition, 1.44 GHz Intel Atom CPU, 2GB RAM, 32GB of storage, and four hours of battery life. It weights approximately 1.5 pounds and is smaller than the average paperback book. It also has a micro-SD card slot and Bluetooth technology, so it can be paired with wireless keyboards and mice.  Its docking station also has an HDMI hook-up, one USB 3.0, two USB 2.0, a VGA and Ethernet ports, as well as a 2.5-inch hard drive bay and an audio port. And, of course, internal wireless connectivity.

For those wanting more computing power, the Pro can be opened up to add an internal 2.5″ hard drive.

The advantage of laptops for college students is that they’re less bulky and more portable than desktop computers. The disadvantage is that one spill on the keyboard and they’re fried. I’ve replaced 3 laptops for my two college students, all from accidents with liquids and keyboards. (I’m not counting the unfortunate cat vomit incident that destroyed my old MacBook Pro.) At this low price, $169, it’s a bargain for budget-conscious parents and students.

The Kangaroo takes up little space on the desk, the monitor can be shifted to wherever the student wants, and any spills on the keyboard require only a keyboard replacement. Students won’t be able to pick it up and carry it to class, as it’s not functional without attached monitor, keyboard, and mouse, but they have their tablets and phones for that. The one issue I see is that some college students may need more computing power than the Kangaroo provides.

For those with second homes or those who must take their computers from one office to the other, the Kangaroo offers the ability to disconnect at one place, drop it into a purse or backpack, and set it up in another place that also has a monitor, keyboard, and mouse set up to your liking. This might be ideal for those with second homes and an office in each home. Yes, you can do this with a laptop but, again, that is going to be heavier and bulkier than the Kangaroo Pro.

Laptops are great but their keyboards are often cramped and frustrating to use. For those who suffer from tendonitis like myself, an ergonomic keyboard is a health issue, not a comfort issue. Yes, you can plug in an external keyboard to your laptop, but that requires reconfiguration of the entire desk setting and isn’t ideal, given the monitor size of some laptops. The Kangaroo Pro allows for customization of keyboards and monitors at a low cost. (My husband has a docking station for his traditional PC laptop that includes a keyboard and two monitors, but that setup carries with it the cost of a traditional laptop plus docking station over the $169 price of the Kangaroo Pro.) Yes, you can do it with a traditional desktop too, but those are big and bulky.

A Beginning Computer for Kids

Hook up the Kangaroo Pro via HDMI cable to a television and you have a way to switch the kid’s computer on and off and also keep an eye on just what websites they’re browsing. Are they googling what they shouldn’t? Easy to see when it’s on the big screen television in the middle of the playroom. Having their computer connected to the television rather than being able to carry it around the house like a tablet also makes it easier to track and limit their computer time. It’s also super-easy to disconnect and hide if the children have done something that merits loss of computer time.

A smart TV or a Roku will provide viewing of many video-oriented channels but not all. With the Kangaroo Pro hooked to the television, everything that streams on the web can be seen on the big screen. That includes anything on YouTube or Facebook Live or any other streaming service. My kids like being able to watch stuff like the Nostalgia Critic on the big screen. Plus, think of the possibilities for the YouTube cooking or fitness channels on the larger screens. And, um, by other streaming services, I mean, well, any torrent available on the web. Fill in your favorite.

Yet Another Reason to LOVE Sugru…

Netatmo Is the Weather Station for the Rest of Us