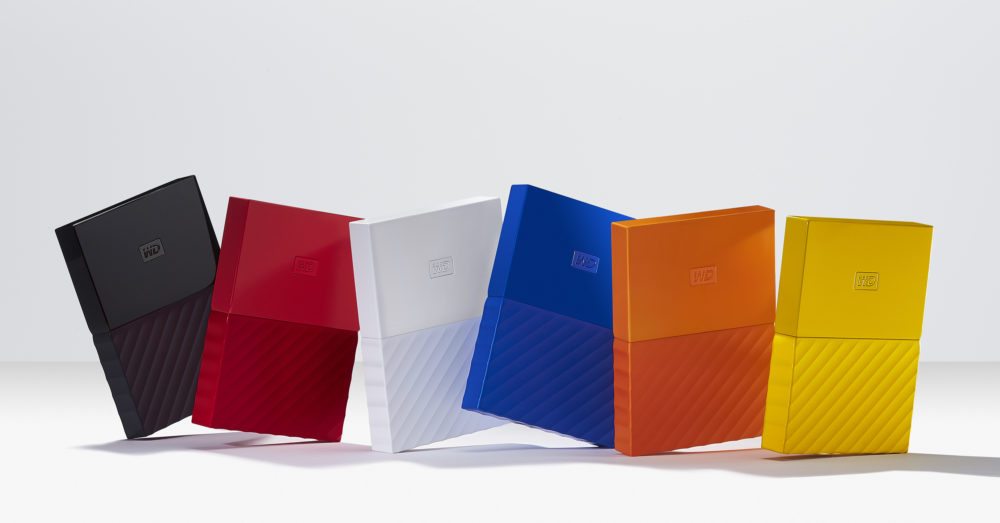 Let’s be honest: when we tell our kids “looks don’t matter,” we mean people. There is still the concept of “style.” We’re all particular to our own sense of it, even if that sense is to ignore it. Hard disk giant Western Digital decided it was time to change up their own personal style in their signature My Passport and My Book external drive families.

I personally reviewed the above, a stylish black My Passport for Mac. Pre-formatted for Mac OS, it mounted on my Macbook Air faster than just about any drive. The fast USB 3 connection kept things going the whole time, with no stuttering. Time Machine also saw the drive right away and offered to backup to it – and did so swiftly and smoothly.

Physically, the My Passport for Mac is a satisfying small brick. While some other drive companies are focused on making things svelte, WD is making sure it’s safe – the drive inside is clearly suspended instead of right against the plastic body. It’s not as pocketable as some other drives, but my cargo pants handled it fine. The body, by the way, has a very handy texture for gripping. With 4 TB of storage at $80, it’s really hard to not be impressed by this.

The only downside to the Mac edition is that it only comes in black. The general My Passport edition (which, of course, will work just fine in a Mac for most things and can be formatted to MacOS format), costs the same and comes in four additional colors – including an orange that I’m a little bit in love with.

I’d like to take a minute to point out how awesome it is that the Mac and Windows editions are the same price point. WAY too many companies add a nonsensical “Mac tax,” often charging a premium on external drives formatted for MacOS. Instead, WD is simply making a pre-formatted disk in their range, at the same specs and price.

For the non-portable users, there is also an update to the general My Book line, which gets a similar style.

While a desktop drive may not need a textured skin for gripping, I really love how they kept the design across the two lines. I also like how they kept one element I’ve always liked about My Books – you could imagine a row of these, side by side, on a shelf. Silly, I know, but I liked the “book” image. Prices start at $129.99 with capacities up to 8 TB.

My opening paragraph aside, if WD was just expecting you to buy these based on looks, I would not be wasting your time. But when the looks are on top of some of the best drives in the industry, and perform as well as my review unit? Totally worth more than a quick glance.

Note: The folks at Western Digital sent me a My Passport for Mac to try out. It’s not orange, but I can’t really ding it for that.