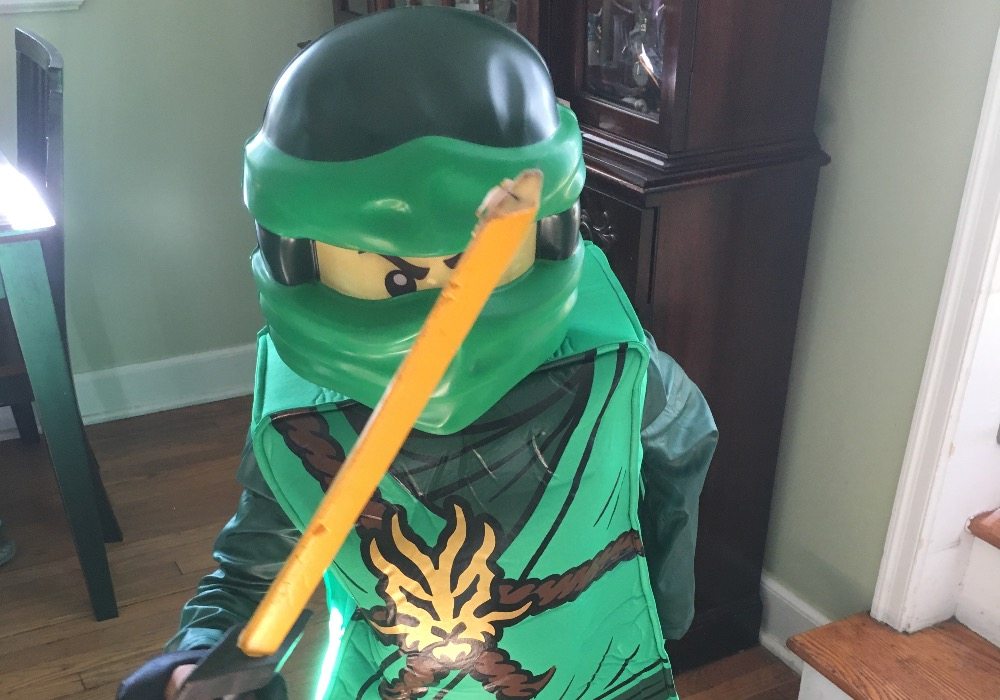 As the first cool, brisk breeze of fall whistles through the trees here in New England, everything turns to pumpkin spice and apples. And of course, Halloween. Halloween has been on my mind since late July, however. It’s not that I’m a huge Halloween person. In fact, for whatever reason, I don’t really love the holiday that much. It happened to be in late July that Disguise, Inc. offered up a review copy of their LEGO costumes. With a family that lives a LEGO life, I nodded my head in acceptance so hard it almost fell off. It’s a good thing I’m not a minifigure.

When the costume arrived in mid-September, my son couldn’t wait to jump into it. As he started taking the costume pieces out, I immediately noticed their quality.

Now, first, what you have to understand is that I am not new to LEGO minifigure costuming. A few years ago, I decided to cosplay as a LEGO Elizabeth from Bioshock Infinite. So, one of the things I recognize about dressing as a minifigure is that it will always be awkward. Nothing about being a block-shaped humanoid says, “Golly this is a natural state of being.”

When researching making a LEGO minifigure costumes, I learned that most homemade costumes required things like cardboard or plastic in order to hold the cubical shape. This is unwieldy and uncomfortable. Very uncomfortable. Now, for kids who are one-and-done with costumes, this isn’t a problem. For kids who love wearing their costumes in their own play or for those with sensory issues, this is a problem.

Cue the Disguise, Inc. Ninjago LEGO costume. The costume has the perfect balance of comfort and quality. The top is long sleeved and sturdy. The center piece is cloth covered flexible foam. This means that it holds the shape beautifully while also being flexible enough to allow for comfortable movement. My generally fussy kid found the top awesome. The mask is a sturdy plastic, and the eye areas have that nifty sort of netting that allows for someone to see through it without obstructing the view and without others seeing in. To be honest, in my opinion, the hand coverings that make your kid’s hands into little minifigure hands are probably my favorite part. Not only can they be worn like mittens to make the semi-circular LEGO costume hands, but they have an opening so that the child’s hands can poke out to grab candy easily. They’re adorable and make the whole costume. Again, coming from someone who once made a homemade minifigure LEGO costume, the hands were hard to make and the Disguise costume does it perfectly.

For my kid, who trends on the short side of life, the pants were the only problem. The pants are awesome in terms of being just boxy enough while also holding the box shape. In fact, as far as walking is concerned, they were about 90% easy considering, you know, big box shaped humanoid. If your child is on the smaller end of the size spectrum, the pants are going to be a problem.

The pants are great in that they cover shoes to make little box shaped feet. A lot of costumes have the shoe cover option which has caused problems for my kid in the past. However, all of those other ones were shoe-shaped covers and had velcro ties that allowed us to MacGuyver them inside the sneaker to keep from tripping my kid. The LEGO costume, however, by nature of the shape doesn’t have these little ties.

Due to the boxy nature of the LEGO legs, the pants are made of the same cloth covered foam. This means that you aren’t able to roll them up from the top easily for a short kid. All of these issues led to my kid shuffling around in the house and then complaining because he kept tripping over the costume feet. Figuring that these are expensive costumes, I opted to go up a size a bit and err on the side of caution. This might have been my biggest problem with the pants.

My son is somewhere between 48″ and 50″ tall (depending on which doctor’s office or theme park we’re at) and is starting to size out of a size 6. So, I went with the medium. I also figured that since Disguise was sending it in August/September and Halloween isn’t until October, that I would err on the side of a possible growth spurt. To the extent that this is related to the pants issue, I can say that next time I would go true to size or err on the side of going down a size. My son is uncomfortable walking and keeps tripping so we’re going to have to wait until next year to wear the costume trick-or-treating.

Overall, coming from a family whose costumes tend to get a lot of wear, I’d give the Disguise LEGO Ninjago costume a solid 5 out of 5 for the quality with a caveat of being careful in ordering the correct size or at least giving yourself the opportunity to have time to return it for the correct size.

If your kid loves Ninjago like mine does? Get them to whip around and spin with the Disguise Ninjago Costume.