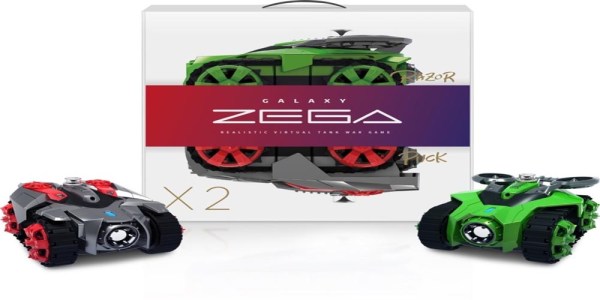 Smartphone-controlled tanks battle it out on or off magnetic snapped-together battlefield, creating a fun interactive experience for kids, families and friends.

At GeekDad and GeekMom we receive a lot of great games, toys, and technology. Rarely though am I ever blown away by every aspect of a new product as I have been with the Galaxy ZEGA Virtual Tank War Game. If you were a lover of shooting your siblings and friends in the classic Atari “Tank” game from Combat or running up scores on “nubes” in first person shooter arenas this is a game for you…and your kids.

From SmartX, the company behind Galaxy ZEGA:

It has become a well-documented and studied problem: with kids’ noses stuck on the screens of their devices, getting families together to play in real life is harder than ever. Today, a new toy combining the strategy and engaging aspects of mobile games with the excitement and competition of a realistic tank fighting toy is launching, bringing the best of both worlds together. Galaxy ZEGA from SmartX lets parents and kids of all ages remotely control small tanks with a Bluetooth-connected smart device app and fight each other on or off the Galaxy ZEGA battlefield to gain points, skills, longer ‘lives’ and other treasures. 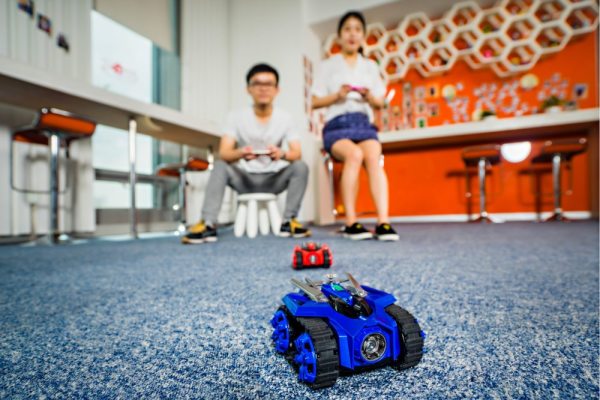 After reading about the Galaxy ZEGA and seeing early images I was anticipating it’s arrival. When it arrived the first thing that came to my mind upon opening the packaging was quality. When I removed my two tanks named Gondar and Leo I was first impressed in the futuristic but clean design. The next thing which I felt was of utmost importance was durability. Holding the tanks in my hands I could tell that they had a solid feel and enough weight to be well-built without being cumbersome. I knew that housed inside the tank was a 32 bit 48mhz processor, Bluetooth 4.0 and an 800 mAh lithium polymer battery. That is quite a bit under the hood for a remote control vehicle.

My next step was syncing the Bluetooth.  I was going to use my Galaxy S-7 and my son’s iPad Mini to control the two vehicles. Unlike many Bluetooth devices the connection was both fast and strong. I used the Zega app which is available in many platforms even beyond just the traditional Apple and Android Devices.

The App not only controls the movement but also the on-board IR gun used to fire at the enemies. The weapon needs to power up after every shot and there is a meter displayed in the head’s up display (HUD) that lets you know.  The app is also where you design your matches choosing between tag and capture that flag style game play. It tracks the number of times you have been hit and when the round is over. It is a very robust app for doing all of the above things. During gameplay I never experienced a bluetooth drop which was also very good.

Next on the list was building the modular arena which came with the set. I was again pleased with the simplicity and amazing design of this. The floor pieces connected using magnets which allows you to whip up designs fast and easy. The walls then snapped into the bases with little difficulty and then used clips to secure the tops. Everything was very solid and never felt in jeopardy of breakage. With an active 5-year-old son, that is of great importance. It also had a great futuristic look—sort of a marriage between BattleBots and Tron.

Once I set everything up even my 23-year-old daughter could not help but mutter “Cool” upon seeing it. I don’t often get a chance to get my children, who are 5- and 23-years-old to connect on much but this was an exception. They spent hours laughing as they shot and tagged each other round after round.

The designers at SmartX have truly achieved what they set out to do. Galaxy ZEGA really is a great marriage between the actual world and virtual world. It gives children a chance to build with their own hands creating the arena and plotting out a game and then uses technology to augment the experience without overpowering it.

The CEO of SmartX explains why he created Galaxy ZEGA:

I wanted to find a way to play with my young son and not let him be isolated behind his smartphone and tablet. I started my company SmartX to solve that problem, developing toys that combined the appeal of online mobile games with the interaction of a real-world toy. We think Galaxy ZEGA is a new form of recreation that appeals to young kids like my son, their parents, and even big kids who have always loved the strategy and competition of mobile games.

As fellow geek parents it is good to see a product that comes from a philosophy that many of us agree with, Galaxy ZEGA is that product.