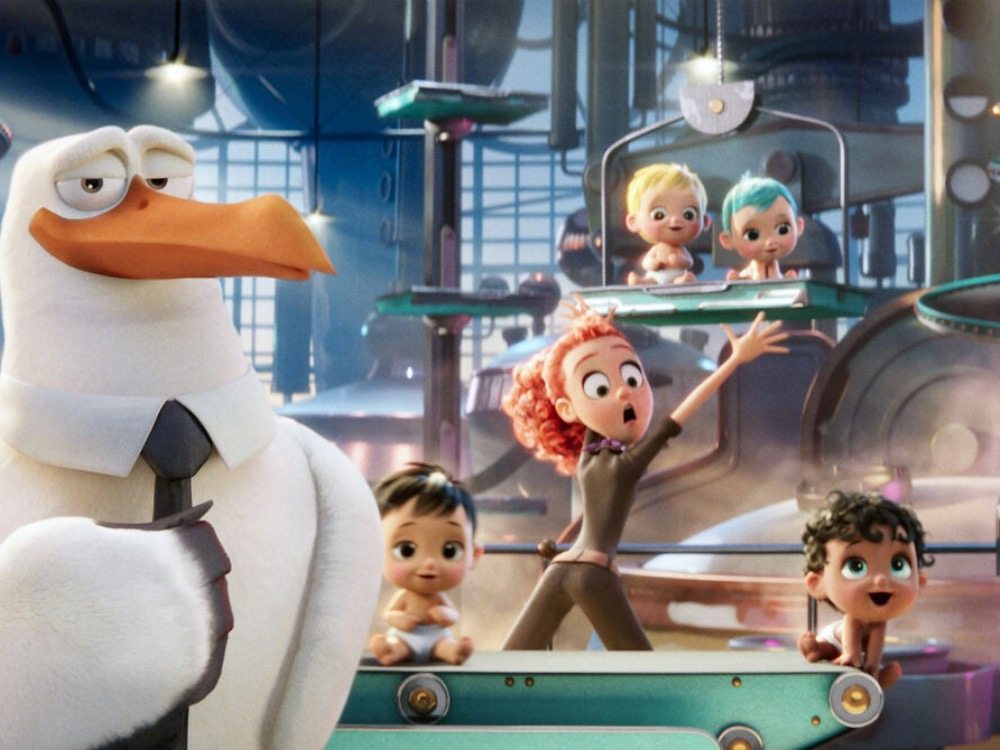 Storks, brought to you by the creative team behind The LEGO Movie, is a rollicking good time filled with laughter and a cute little moral.

After a stork fails to deliver a baby, Hunter, the boss, decides to leave baby delivery and turn storking into big box company delivery a la Amazon. Hunter tells Junior, the main character, that to get promoted to Boss he needs to “liberate” Orphan Tulip, an ingenious little absent-minded professor type prone to profit-imploding mistakes. When Junior can’t bring himself to fire the sweet but bumbling Tulip, he sends her to the “letter delivery” department where she can hopefully stay out of trouble. Meanwhile, in a parallel plot, Nate Gardner, an only child of two workaholic parents, finds an old pamphlet advertising storks bringing babies to families and writes a letter to them asking for a baby brother. In a totally expected plot non-twist, Tulip gets the letter, puts it in the Baby Making Machine instead of the letter vault, and hilarity and hijinks ensue.

2. What is the movie rated and why?

The movie is rated PG. As with most cartoons these days, there are some double entendre style jokes that mostly go over kids’ heads. The excitement of the chase scenes and the pratfall style violence might be upsetting to some kids. When asked what he thought, my 7-year-old said, “Well, I liked it, but there were a few parts that were scary.” Overall, it was no different in violence level than other similarly styled movies such as The LEGO Movie or Ice Age.

I enjoyed it, but I admit to having a low bar for entertainment enjoyment. Tulip is really likable as a character. I enjoyed the predictable but heartwarming character development for Junior and the Gardener family. I loved the wolves. Pigeon Toady was basically a kid cartoon version of the boss in Office Space (and if you haven’t seen that one, I suggest it just because it’s a classic for the middle-aged adulting groups). I felt the pacing was done well and never felt myself looking at my watch. That’s more than I can say for some of the other recent cartoon movies we’ve gone to see. On a scale of The LEGO Movie to Hotel Transylvania, I think it is a solid The Croods or the first Ice Age.

The 7-year-old gave it his seal of approval. He’s still quoting some of the lines and laughing at them. This morning he acted out Pigeon Toady’s musical number in our kitchen. I enjoyed watching him guffaw at some parts. He was definitely mesmerized. My son tends to immerse himself in movies. I will say that at one point, he took my hand, looked at me and said, “I told you. Someone always dies.” I had to point out that no one died. He did, however, reinforce the fact that one character was never seen again. Fair enough, kid. Fair enough.

5. Are there any voices I should look for?

Well, the cast is pretty good. Keep in mind, I’m a huge fan of both Kelsey Grammar and Jennifer Anniston. That made me pretty thrilled. Whether you’re an Andy Samberg fan or not, his job as Junior is solid. I have to give the casting credit; instead of going for a Big Hollywood Name for Tulip, they chose an excellent voice actress who does a really wonderful job bringing all the emotion and all the humor to the role. Key and Peele as the Alpha and Beta wolf are as hilarious in their canine forms as in their human forms. Overall, the voice work is strong and the acting makes the characters truly believable instead of just animation with famous voices.

Despite my imbibing large amounts of water prior to the movie in an effort to be on the lookout for a great Pee Moment, I felt so engrossed in the movie that I didn’t see any moments that I wanted to miss. Clocking in at 89 minutes, if you head to the bathroom before the LEGO short, there’s a good chance you’ll make it. If you really find yourself crossing your legs back and forth in an antsy way, I’d suggest that as soon as the door opens after Junior knocks, you shuffle yourself or your kids off to the closest restroom and hustle on back. That’s possibly the biggest lull. The only other time might be when the Gardeners are building together. But I was pretty engrossed in how much I enjoyed watching the construction so I missed the timing on it.

7. What about the credits, man?

OK, we stayed for 80% of the credits before the kid got tired. I enjoyed the animation at the beginning of them. So did the kid. Overall, if the antsy pants kids don’t make it to stay, I wouldn’t worry.

8. Tell me about the short beforehand?

I wasn’t expecting there to be a LEGO short before the movie. In fact, I was so surprised that I almost wondered if the whole Storks thing was a hoax. Once I realized it was a pre-feature short, I sort of sighed a bit. The short is cute. I like the ending. If you’re not a fan of Groundhog Day? This is a good time to refill your popcorn bucket. I will admit that the ending was simultaneously laugh-out-loud combined with heartwarming.

9. Is there a teachable moment?

Yes. I’m not sure if the teachable moment is for the kids or the adults. For kids, I think the message is clear that you can have two families: the one into which you are born and the one you choose. Storks does a great job of making it clear that both matter equally. In a lot of popular culture, I find that there is a sense of having only one of the two types of family be worthwhile. As someone who always struggles with the born/chosen family tension, I loved the fact that the movie was all encompassing.

For parents, the lesson is equally obvious. Both Junior and the Gardeners are workaholics. Again, I loved that for adults the lesson is the same as for the kids but with a slight twist. Just as the Gardeners learn to reconnect with their son, Junior connects with Tulip. I loved that the Junior/Tulip friendship is totally platonic. At no point is the human/stork relationship played as romantic. It’s really just about two beings coming together with a common purpose who form a bond. Additionally, as someone who works from home like the Gardeners and constantly has to respond to work emails, I have often had my son tell me to “put down your phone.” I think that the lesson for parents here is twofold in the best way possible. First, like the Gardeners, we need to remember to connect with our kids. Yup, we all know that. However, like Junior, we also need to remember to build and maintain our platonic friendships. Since having a child, I’ve found that my circle of trust has changed and evolved. Like an amoeba, it maintains that formative membrane but constantly shifts. This continual movement has allowed me to evolve varying different senses of interconnectedness that create a greater sense of family. In a nutshell, in the same way kids learn that it’s important to have two families, adults get to see that it’s good to not only connect with our kids but also with our peers.

10. What about the animation?

Honestly, I’m not an animator or a professional in this area. I will say that I loved watching the “mind blown” scenes and thought they were probably the best combination of visuals in the whole movie. I also have to say that the artistic creativity behind the continual wolves “form of!” moments cracked me up. I’m fairly certain that I’m never going to see a minivan the same way again. 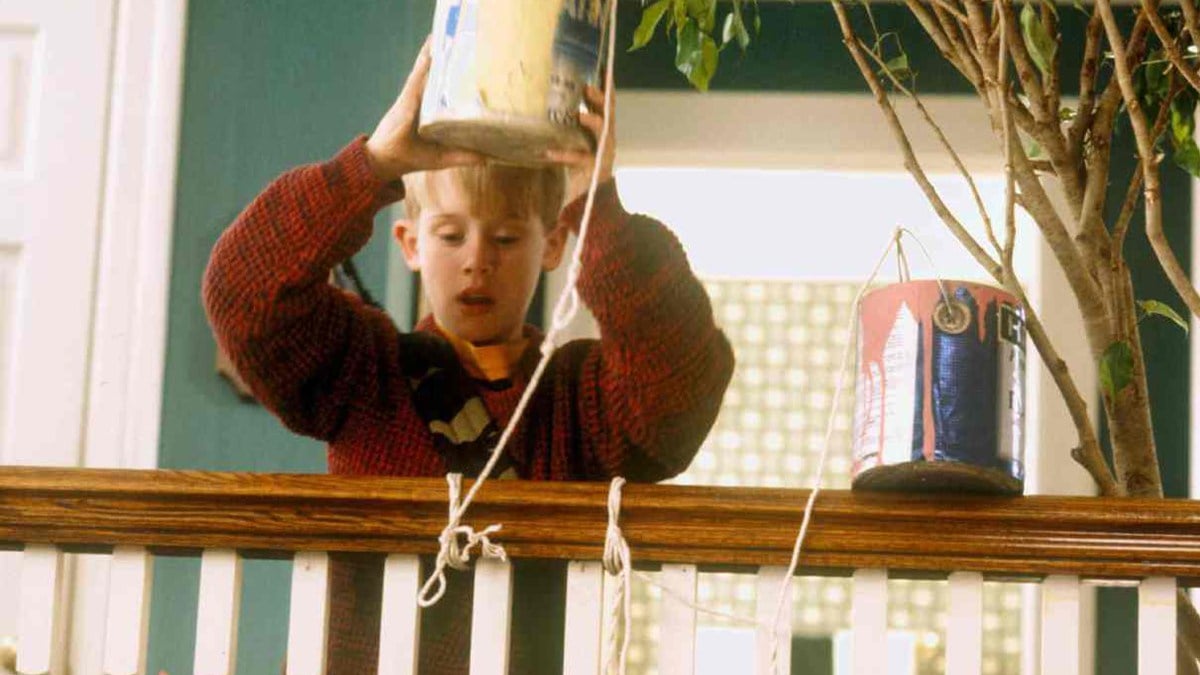 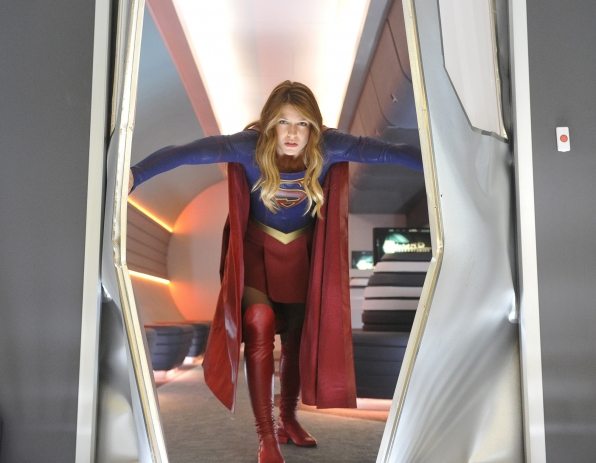