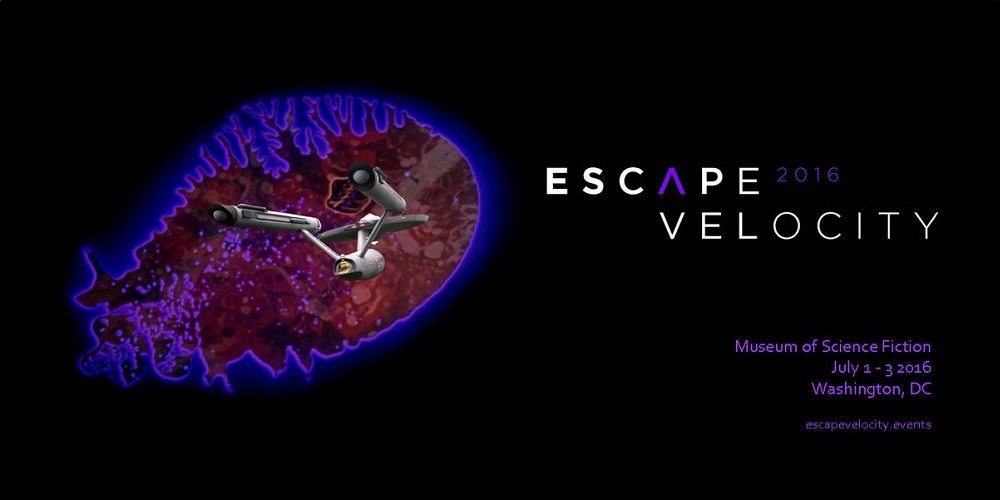 This weekend, while the rest of the country is trying to enjoy a long holiday weekend with fireworks and barbecue, I’ll be taking one for the team and checking out Escape Velocity–a brand-new con put on by the geniuses behind the Museum of Science Fiction. Escape Velocity is intended to be a “micro futuristic world’s fair to promote STEAM education within the context of science fiction using the fun of comic cons and fascination of science and engineering festivals.”

Escape Velocity is not a comic-con. It’s not a pop-culture con populated by celebrities and their autograph lines. It’s a STEAM-centered celebration of all things geeky, and it promises to be something great. (Tickets available here.)

Even though this is just the first year for the event, the organizers clearly have lofty ambitions, and they’re jumping out of the gate with an impressive guest lineup that includes space scientists, astrobiologists, NASA astronauts, aerospace engineers, actors, sci-fi authors, other STEAM superheroes. They’ve also lined up several guests with uniquely distinguished geek pedigrees.

Rod Roddenberry (son of Gene), Adam Nimoy (son of Leonard), and Jamie Anderson (son of Gerry) are much more than a fantastic trio of sons. Each is not only preserving his father’s legacy but also blazing a new trail within the genre.

Other guests include Marc Okrand, Greg Bear, David Brin, and Dr. Jim Green (NASA’s Director of Planetary Science and technical adviser on The Martian), among many many others.

Standout panels include discussions of Star Trek and its impact on space travel, the future of food, autonomous vehicles, virtual reality, drone applications, and robots. And because this is still a fan convention, there are also a lot of panels about the intersection of STEAM topics with the properties and franchises we all love.

On top of all that, there will be an exhibition featuring some of the many artifacts the museum has already collected, board gaming, kids activities, a science fiction film festival (featuring The Rocky Horror Picture Show), a sci-fi burlesque show, and several other after-hours parties and events.

Kudos to the Museum of Science Fiction and everyone else involved in Escape Velocity. You’re trying something new, and I admire your moxie. (Again, tickets available here.)

A Google-a-Day Puzzle for Dec. 3

Scrabble Flash Is a B-L-A-S-T