The Bots are back! Season 2 of BattleBots premiered this Thursday with twice the number of competitors and a supersized 2-hour show. But does more bot carnage equal a better show? Your weekly bot guides Anton Olsen and Kishore Hari will have the answers.

Last year’s summer edition was a surprise hit, earning the show a second season. Smartly, they brought back the show’s top competitors – Bronco, Tombstone, even controversial characters Creative Control and Ghost Raptor. Lots of new competitors as well, including many younger and international build teams – a welcome sight. The field has doubled in size with 48 competitors, narrowing to a field of 32 for a single elimination bracket. In hopes of more creating visual drama, they also added the option of mini combat aerial drones, often equipped with fire. It’s a hokey addition that I can’t see having much impact on a match, but am I going to complain that much about more fire in the arena?

This year also brings guest judges joining returning judges Fon Davis and Jessica Chobot. First up, the legend Adam Savage, who has some experience in the arena. His tales of Blendo are legendary.

There were a lot of bouts this week, so we’re just cutting to the most interesting ones.

Kishore Hari: Slow hammer vs. slow flipper = surprising entertainment. It went the distance with the decision going Beta’s way, even after surviving the curse of a fallen bot upon entry to the arena. This battle looked like me trying to hammer in nails – lots of misses with a few satisfying hits. Have to give Beta credit, the hammer was so powerful that it would flip the entire bot. In the end, Lucky couldn’t get enough regular hits on Beta to advance. Really hoping to see Beta vs. a flimsier bot next round.

Anton Olsen: My son and I really enjoyed this match. Beta put so much weight into the hammer that every swing really demonstrated Newton’s Third Law. Lucky was well-armored and I liked the design and robust nature of the progressive four bar flipper. As for the match, it was entertaining despite a lack of destruction. Lucky was built tough and even took some solid hits to the flipper without obvious damage. In the end Beta proved to be the better driver of these well-matched robots.

KH: Last year’s villains, Complete Control, were back in the arena ready to avenge their early exit. Bombshell brought in a menacing axe, but CC seemed to improve their original lifter, along with the same powerful fire jet, and a decoy plant mini bot for show. Fire on the bots are usually just for the visuals, but we may have gotten our first true fire-based victory. With an epic lift lasting nearly 30 seconds, CC literally torched Bombshell in the most satisfying moment in the episode. CC did not let Bombshell appropriately rest, as oil or some other fluid poured out on CC.  The arena hammer mercifully put an end to this lopsided, but entertaining match.

AO: Complete Control held true to their name and maintained complete control throughout the match. Ten seconds into the match and they’ve already picked Bombshell up and spun him around. Their torch stepped the flame game up a few notches with significant heat and destruction. Bombshell’s axe was nearly ineffective vs. Complete Control. I feel the spike on the back of the axe would have been more effective than the blunt edge of the axe.

KH: Did Blacksmith’s hammer hit the top of the arena? Bronco relentlessly flipped Blacksmith everywhere. Bronco added wheels and the extra handling showed, easily outmaneuvering Blacksmith most of the match. The flipper looks much more powerful than last year – sending crates flying in their montage. Going to be hard to beat Bronco. Best driving I saw all episode.

AO: I love Bronco’s evolution from last year. Bronco has always been a fast and agile robot, but the extra pair of wheels make a huge difference with turning and accelerating. Blacksmith never really had a chance vs Bronco’s titanium armor. I don’t think Blacksmith’s hammer was sharp enough or heavy enough to deal enough damage to slow Bronco down, let alone stop him. As of this round I’m picking Bronco to make it to the finals based solely on their ability to drive this amazing robot. I may change that tune once I see more of the competitors, but I’ll be truly surprised of they don’t at least make the final four. 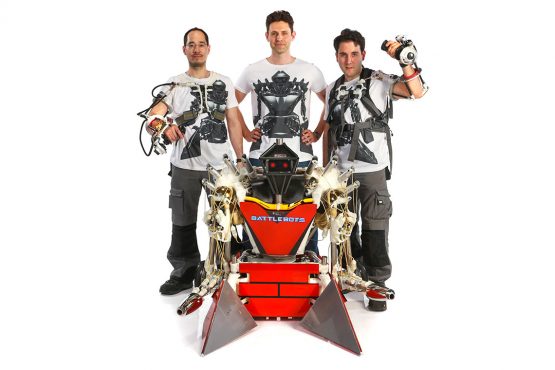 KH: We have entered the avant garde part of the show. A humanoid robot with puppeteered controls. Innovative, yes. Effective, no. It’s hard to imagine a human under the best conditions having much of a chance in the arena, and this humanoid version fared no better. Loved the design and their detail to human anatomy was fascinating. The anatomy was mimicked with a mix of strings, springs, and ball joints – but what is most intriguing is the redundancy in the system so it can keep fighting even with failures. The builders were honest about its chances, and I sincerely applaud the effort. Plus, the shield was a great touch. Warhead is a classic Battlebot, newly outfitted with a firebreathing dragon head.  If we’ve learned anything from Game of Thrones, human vs. dragon is an unfair fight. It’s true in robots, too.

AO: The humanoid had many issues, too many to list them all, but if I had to pick two they would be materials and control. The design was fragile, flammable, and too slow. In the few shots where we could see the driver and robot it appeared to have a second or more lag from driver action to robot movement. With the best and most nimble robots lag becomes obvious around 100ms and annoying at 500ms. Warhead was a nice upgrade from last year, and they should do well. I don’t think they have the agility to beat the better drivers, but they will put on a good show.

KH: I was pumped at the idea of 2 hours, but I really only had the appetite for 1 hour. More did not equal better for me. Action was good, but not up to the levels of concluding matches from last year. We had one really entertaining bout in the mix, but it was fun to get back in the ring. As the field narrows, the matches will get better, but I suspect we’ll see many rematches from last year as the strongest competitors are largely the same folks.  This year will be more fantastical for sure, but I hope we get the same quality which kept me coming back for more carnage.

AO: We watched on Hulu with commercials removed for a runtime of 85 minutes, but that felt a little long. There were a lot of matches this episode, and it was good that they skimmed over some of the less exciting or lopsided matches. I think we’re in for another great season with plenty of ingenuity and destruction.

You Let Your Kid Read What? A Clockwork Orange

GeekDad Puzzle of the Week: Nerds No More