Today Stephen King started the day by officially announcing the casting of Idris Elba and Matthew McConaughey as Roland Deschain and the man in black, respectively, in the upcoming Dark Tower film.

It's official: The man in black fled across the desert and the gunslinger followed. #DarkTowerMovie @McConaughey @IdrisElba

Accompanying King’s tweet, was an exclusive discussion between Entertainment Weekly and the director and co-writer of the film, Nikolaj Arcel. And while there has been plenty of debate, even some here on GeekDad.com, about the casting choices, Arcel and King both defended their decision.

Arcel acknowledges that skin color actually was an important factor in the relationship between Roland and Susannah, the black amputee he drew into his world from her life in 1964. In the books, she is not thrilled to find herself yanked into another dimension by a grizzled white guy. “Some fans are asking, understandably, ‘What about the racial tension?'” Arcel says. “But as the story progresses that will be made clear, how we’ll deal with all those things.”

I, for one, am willing to give them the benefit of the doubt that they will make the new version of the story work with both the casting choices and the original story.

This tweet alone has me excited about Elba’s casting.

But I think there are more important things for fans to discuss in the announcements today. Arcel has stated that filming will begin in South Africa in just seven weeks (which hints that maybe a good portion of the other main cast members have already been chosen as well) with the target of January 13, 2017 for the movie to hit theaters.

The biggest unanswered question is what the content of the first film will be. While King has confirmed the film will start just like the first book (something he has always been adamant about), “The man in black fled across the desert and the gunslinger followed,” King and Arcel have both also made it clear that the first film will NOT follow the plot of The Gunslinger and will instead be mostly focused on the modern world.

While I’d love to have seen the first move follow the first book, it makes a whole lot of sense for the first movie to actually get viewers invested in all of the main characters right up front and then jump around (as the books often do) to fill in the rest of the story with future films and television series.

Are you as excited about this as I am? January 2017 can’t get here soon enough for me. 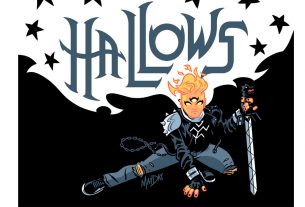 GeekDad Puzzle Of The Week: How I Wish You Were Here