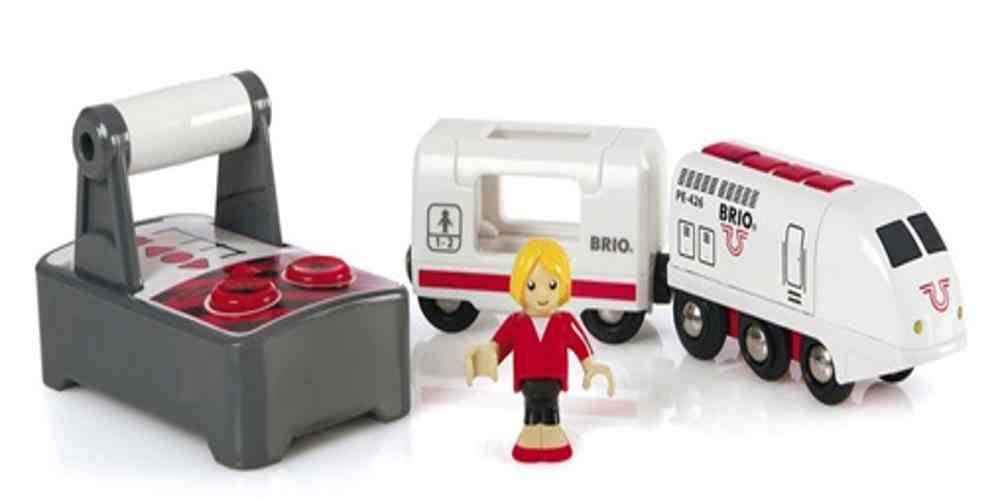 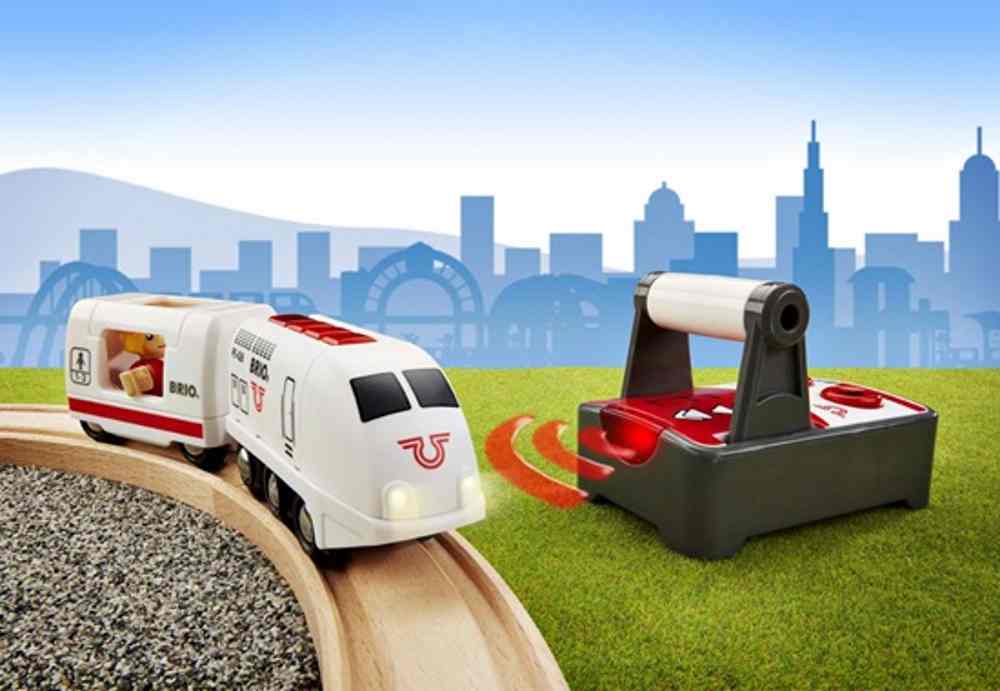 Wooden railways have dominated early-years playtime in our house. For the past ten years, our living room floor has almost continually been covered in track schemes of all shapes and sizes.  We have many sets, made by many different companies. For quality, one brand stands above all. BRIO is undoubtedly the Rolls Royce of wooden train construction.

Trains? We have literally buckets of them. I have a great fondness for rail travel and this has passed down to my boys, and into their toy collection.  This year BRIO are offering something a little different, their Remote Control Travel Train.

Generally, I’ve shied away from battery-powered locomotives. I’ve found they remove a layer of interactivity from playing with the railway. I want to see my children with chins on the floor, pushing their trains, and making the announcements as they rattle into the station. When the train is battery-powered, there’s a tendency to watch passively as it trundles around. This becomes boring, fast. The train is removed, replaced with a push train, and cast aside. Then, inevitably, the discarded train will drive itself under the sofa, lodge somewhere and gradually run its batteries down to nothing.

On top of that, they became a source of frustration. Children are not known for their moderation; they are creatures of excess. Why use two or three trucks, when you can use fifteen? The giant snakes my boys build need about six battery-powered engines to pull them.

So what about BRIO’s new radio controlled loco? Firstly, it still offers an interactive experience. Whilst there’s no physical pushing of the train, there is still a measure of control. There are stations to stop at, leading to announcements to be made. Calamitous shouts ring out when a train overshoots the platform and is then careful reversed back up.

My experience of the Remote Control Travel Train is that it has increased the age range of our railway collection. Our seven-year old has taken a real shine to it, creating a host of role-playing situations for his newly created town. Normally he no longer shows interest in the trains, but with the remote control, it feels a little more grown up. The RC component works well and, unless the train is in a tunnel, very responsive. It is sometimes a little slow to respond to a change in instructions, but, so far, nothing bad enough to induce child outrage. The remote functions can also be replicated using three buttons on top of the train.

Weight of trains is still an issue – we have a non-BRIO lifting bridge, but the slope was too steep for the train to make it. The train can climb up standard elevated track pieces, with 3 coaches attached. On the flat, the train can comfortably pull 4 or 5 coaches. Seven or 8 coaches does move but is slow, and any more than that brings it to a halt.

This year, BRIO have also introduced new trains and sets with a “Horse Farm Theme”, allowing your children to take their engines out into the country. We rail-tested the Countryside Horse Set, which comes with 8 curves, 2 elevating pieces and 4 bridge pylons. BRIO have moved away from using wooden pylons, to plastic rock-effect ones, which are much better. They don’t topple over so easily and hold the track more securely.  The set also comes with two short straight pieces of plastic track, one that attaches to the horse’s barn, the other, a gated crossing. There’s a green diesel train and horse trailer, a horse and blanket, a person (who can ride the horse, if the blanket’s not on), four fence panels, and a pair of evergreen trees.

The set makes a nice starter railway, especially for the more pastorally-minded child. BRIO have also released a stable and a show jumping set to go with the Countryside Horse Set, and they have various farm related sets too.  Or you can do what we’ve done and connect it up to the BRIO Metro City Train Set, for a full town and country experience. I’m a bit of a metro transport geek, and this set, as well as the more affordable Metro Railway Set, are the most realistic wooden suburban railways I’ve found. The Metro Railway Set even comes with its own Metro map and ticket machine! All these sets are curve heavy, as often seems to be the way, so if you want to connect them together some extra straights always come in handy.

The longevity and re-useability of BRIO’s wooden railway is its biggest draw. A wooden railway set will last for generations, especially if it’s well made. All of the above  have been made using high quality wood, as one would expect from BRIO. They are noticeably better in quality than their competitors, though you do pay a premium for it. Whether just starting out on your wooden railway journey, or looking to expand your collection to Trans-Siberian proportions, BRIO’s products are just the ticket.

Disclosure: I was sent a remote control train and the Countryside Horse Set in order to write this review.

Good Luck Charlie: Finally, A Disney Sitcom You Might Actually Want to Watch