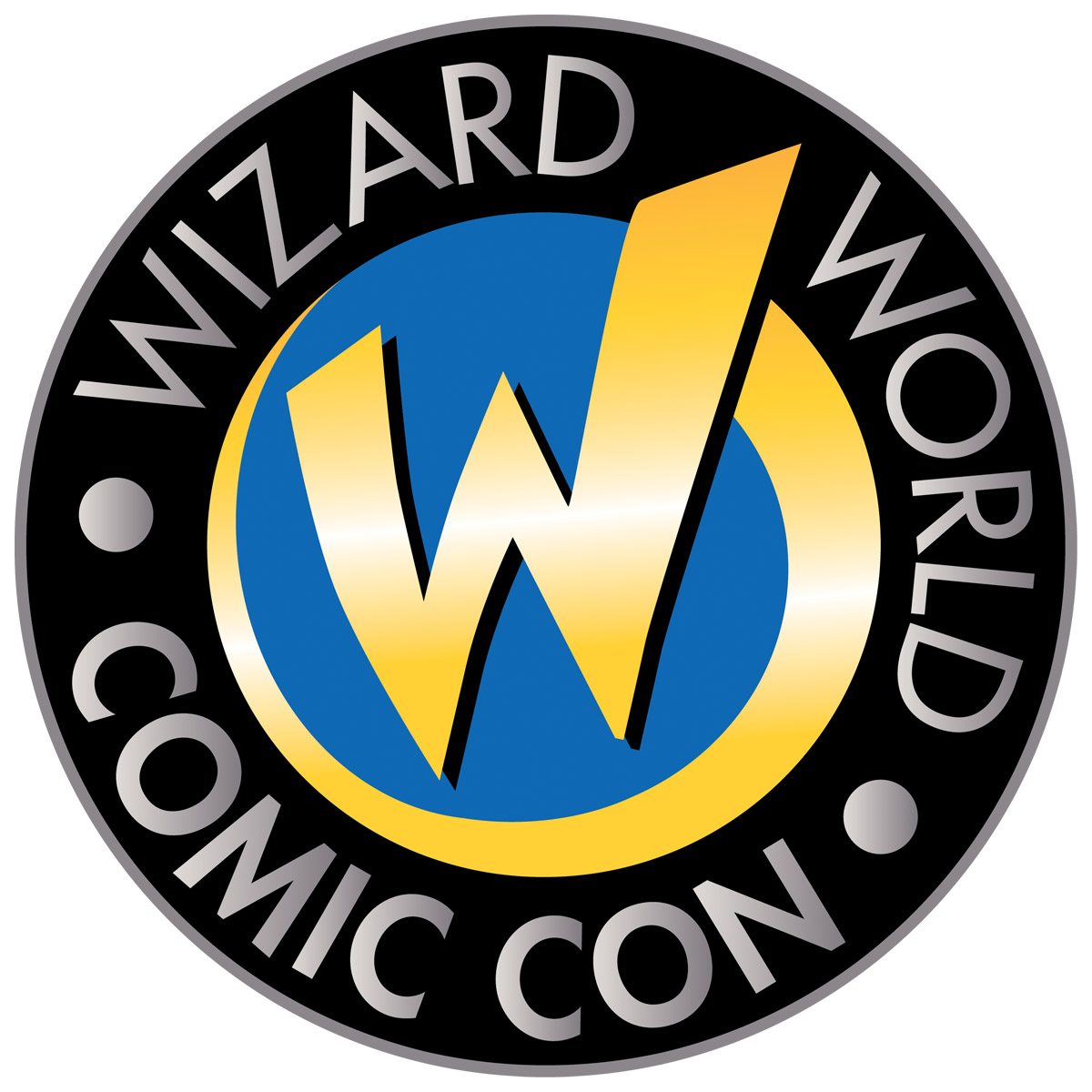 This past weekend I attended my first Wizard World Comic Con in Portland, Oregon. Every time I go to a con in Portland, I am so pleasantly surprised at how low-key and chill it is. There were crowds but nothing overwhelming or soul-crushing, which is exactly how I like my cons. 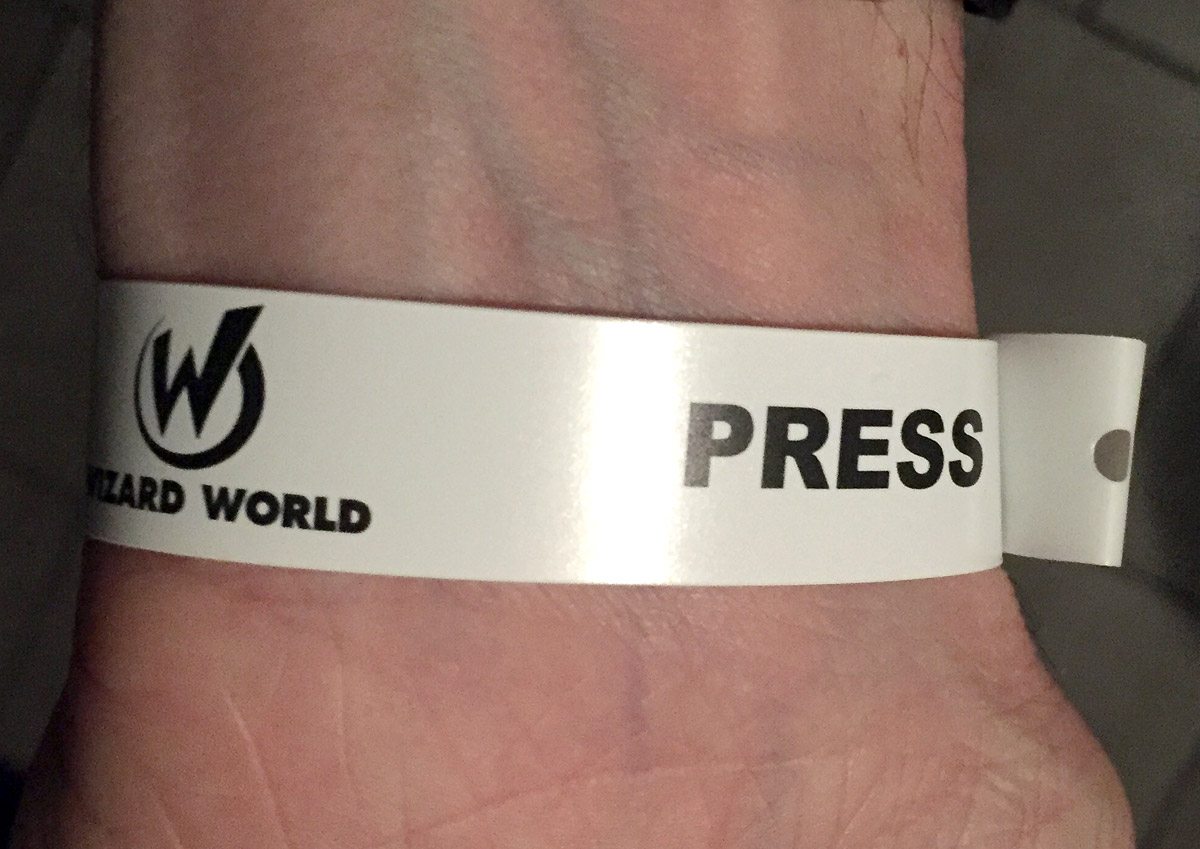 My first stop was to pick up my wrist band. Wizard World does wrist bands instead of badges, which is something I’ve never seen before. I understand the desire to not want people to sell or switch badges out, but, on the other hand, making someone wear a wrist band for an entire convention could go horribly wrong. Thankfully, it was cold the entire weekend, and I didn’t have any problems with undue sweating under my wrist band.

After arriving early on Saturday morning, I headed straight for a meeting with Jim Merk from Newegg.com for a private demo of the new MSI GT72S Dominator Tobii gaming laptop. I’ll have an in-depth review of the laptop and eye tracking coming shortly, so keep an eye out.

I then headed to the “Cosplay Panel (18 and Under).” This panel showcased costumes that kids had worked on in conjunction with a local university that hosts cosplay workshops. It was really amazing seeing kids who were so excited and into their cosplay getting up (despite their obvious fears) and talking about what they did to make their cosplay dreams a reality.

Next up was “Behind the Craft” with Abby Darkstar & Keith Zen (KeAbtium), Zach Fischer, Bill & Brittany Doran (Punished Props), and Jesse Lagers & Chin Chin (Midnight Armor). As you may have noticed, I cover Punished Props a lot. They are awesome people doing great work and are the reason I went to this panel. That being said, everyone on the panel had a ton of great information and does amazing work. I highly recommend checking them all out. This panel was great in that they focused on all the work you should be doing before you even start building–everything from research to budgeting to time management–all crucial things that a lot of us forget and then get overwhelmed by. 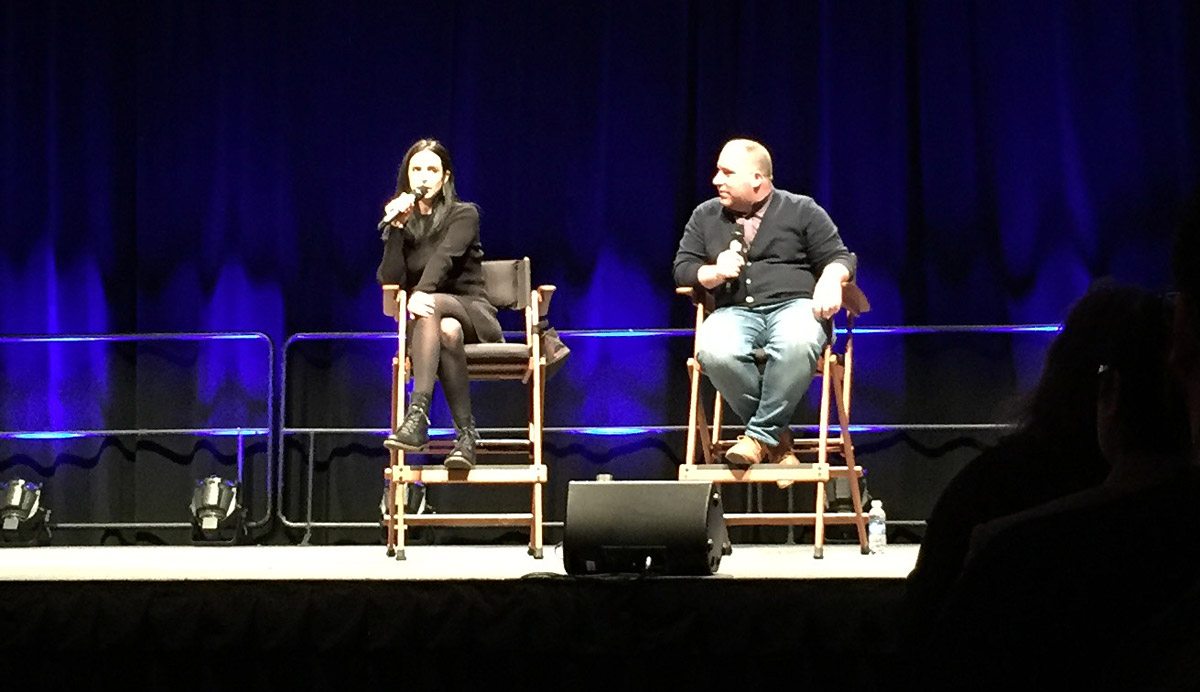 After grabbing a quick bite to eat, I then attended “Alias Investigations”–my only giant panel of the weekend, which was a Q&A with Krysten Ritter. Ritter is adorable and witty and so down to earth even in front of a giant crowd. I really hope to get the chance to do an interview with her some day. 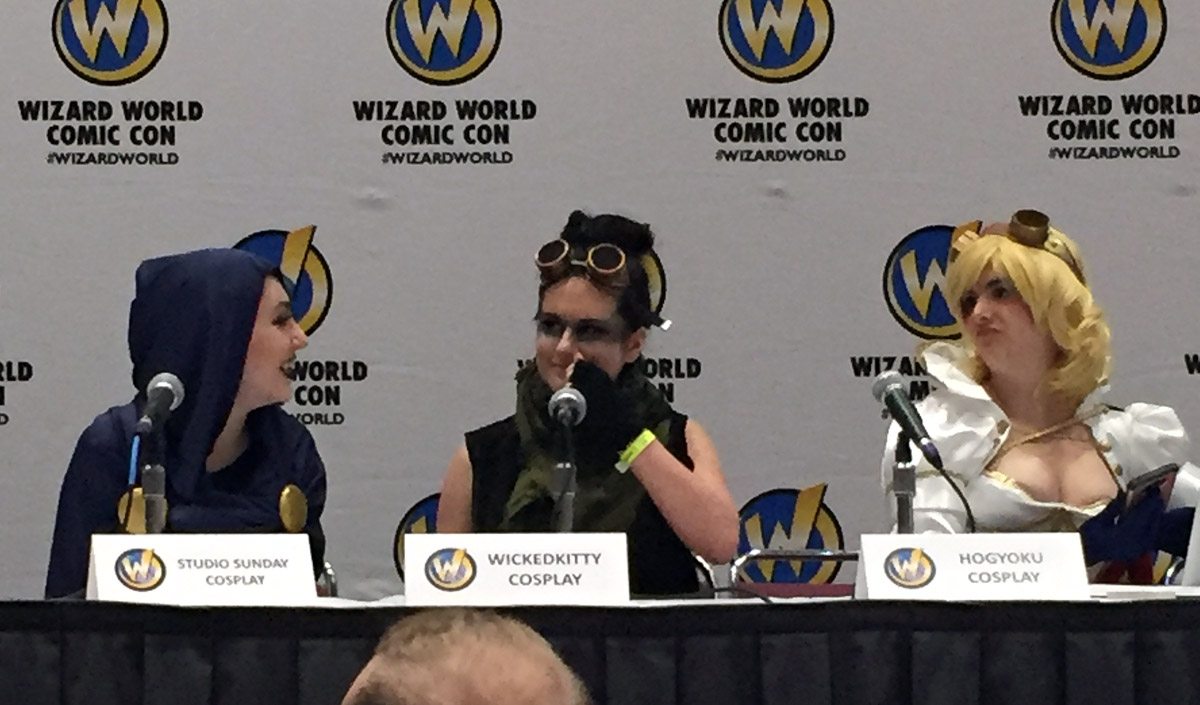 The last panel of the day I attended was “Cosplay 000: Preplanning – Before You Touch the Fabric” with Studio Sunday Cosplay, Wickedkitty Cosplay, and Hogyoku Cosplay. Similar to the earlier cosplay panel, they focused more on getting ready to build your cosplay than any actual building. These preplanning cosplay panels were actually a refreshing break from the more standard how-to type panels (which I also love).

There were some really great costumes in the contest, but most of them went across the stage really quickly, which made it hard to really appreciate them. I don’t know if people were nervous being on stage or were told to not dawdle, but only a small fraction of cosplayers were asked detail questions by the judges and allowed to stay on stage for more than a few quick seconds.

On the bright side, they seemed to have been weeding out some of the nicer costumes that weren’t actually built by the people on stage. While I have no problems with buying props or costumes to wear to a convention, to me, it seems a little disingenuous to go into a competition wearing something you didn’t create. I realize there is a gray area when it comes to a costume that is made of both bought and made components, but if a majority of your costume was not made by you, I really don’t think you should be competing.

One of my favorites of the night actually ended up being the winner for  Best Male Hero–Robin Hood! And not Cary Elwes or Kevin Costner Robin Hood but the fox version from the Disney film. To this day, Robin Hood is my favorite Disney movie, and my two-year-old son loves it as well and has already watched it more times than I have!

Although I don’t care much for Cinderella and her story in general, the Best in Show prize went to an amazing Cinderella costume that was 100% made by the contestant who put in hundreds of hours making over a dozen layers of skirt and hand gluing thousands of rhinestones to the dress. Even I could see the love, care, and hard work that went into making such a magnificent dress. 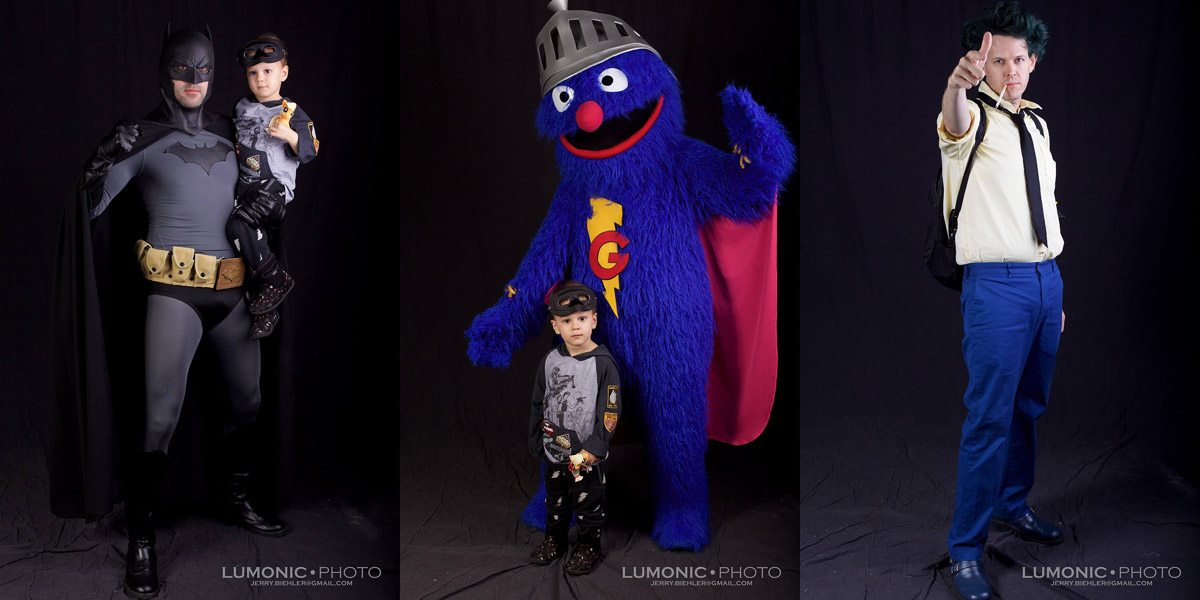 On Sunday morning, I took my son with me for a couple of hours. He loves just walking around and “seeing guys” as he calls it. We stopped by the Lumonic Photo booth for some photos–Owen with Batman and Super Grover (Applejack in hand) and me solo in my Spike cosplay. 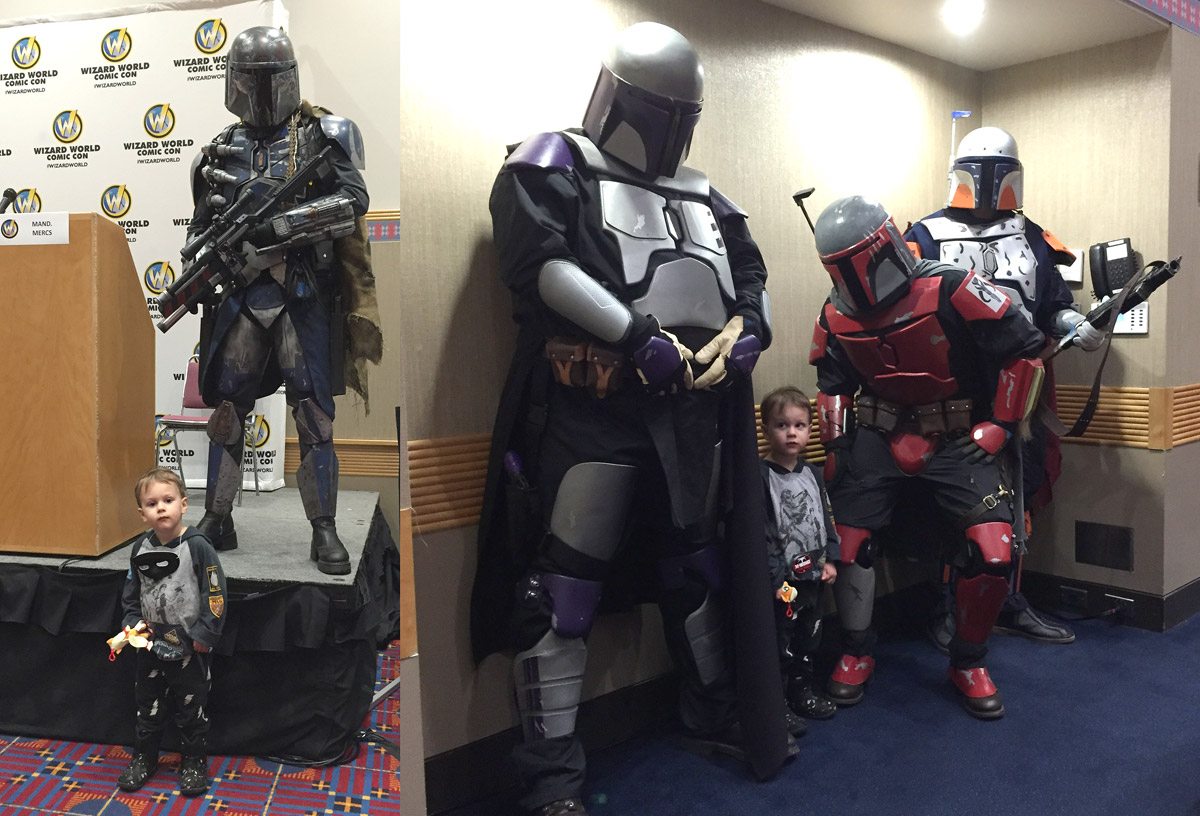 We then attempted to go to a panel together. The Mandalorian Mercs Costume Club Presents the Art of Making Wearable Durable Armor in Seconds panel promised to teach us how to make our own armor relatively easily. The panel was put on by the Mandalorian Mercs of Concordia Clan, a local group dedicated to building armor and going to events. The panel was great until my son had to go potty halfway through and then didn’t want to return. So while I got a piece of PVC foam to build a test piece of armor, I missed out on the techniques they were going to describe. 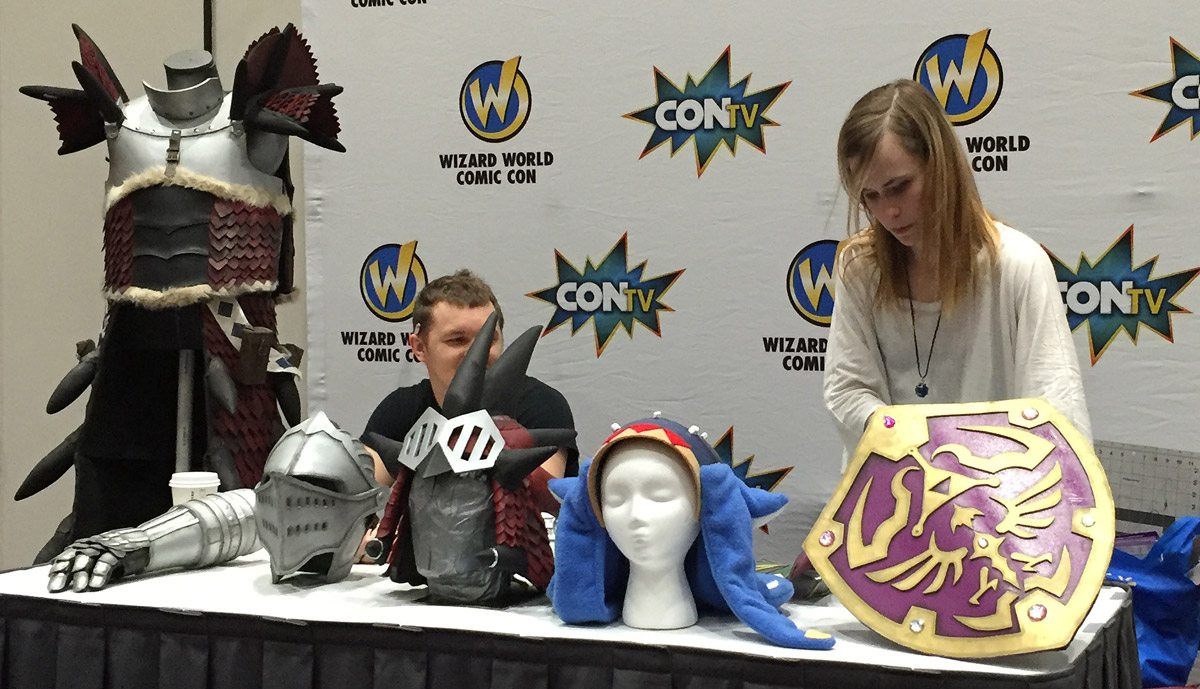 Owen then went off to hang out with his mom while I went to my next panel–Cosplay With Foam: Beginner’s Guide. Through my research, reading, and interviews, I have a pretty good foundation in foamsmithing. That being said, this panel didn’t really teach me anything new (though I did get to see some cool pieces). However, a lot of the audience were obviously new to the scene and they had a lot of questions, all of which were answered very well. This panel was really great for any foam beginners (which is exactly how it was billed). 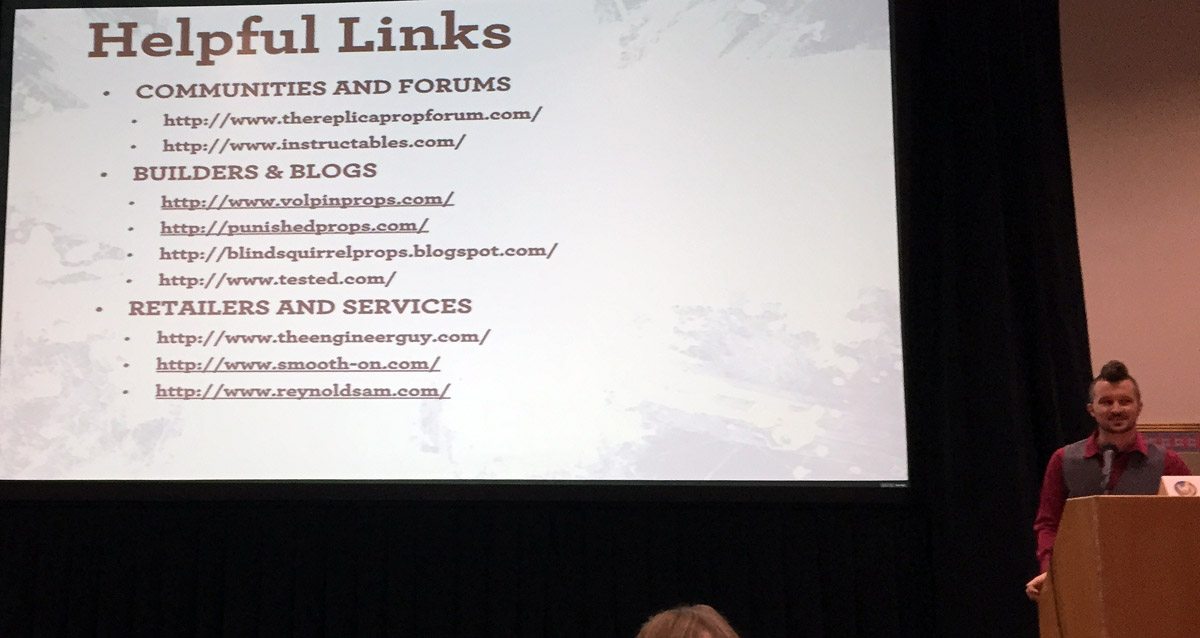 My final stop of the convention was the Intro to Moldmaking panel by Volpin Props. I was disappointed that I had to miss his other two panels–Propmaking for Beginners and Painting & Weathering For Props–but I am certainly glad I made it to the third. Harrison Krix is an amazing talent and, while I’m far from being a master in any cosplay, foammaking, or prop building, mold making and casting has always eluded me and is something I really want to get into. The panel was extremely informative, and now I’m itching to try my hand at casting again. I got to chat with Krix and Allegra Torres a bit before the panel as well and can’t wait to cover some of the great stuff they have planned for the future.

As always, there was a ton of great cosplay. Here are some of my favorites:

In between all the panels I attended, I did walk the floor and wanted to point out a couple of highlights. There was a great variety of vendors with all different types of product, from custom props and costumes to toys and comics–pretty standard stuff. 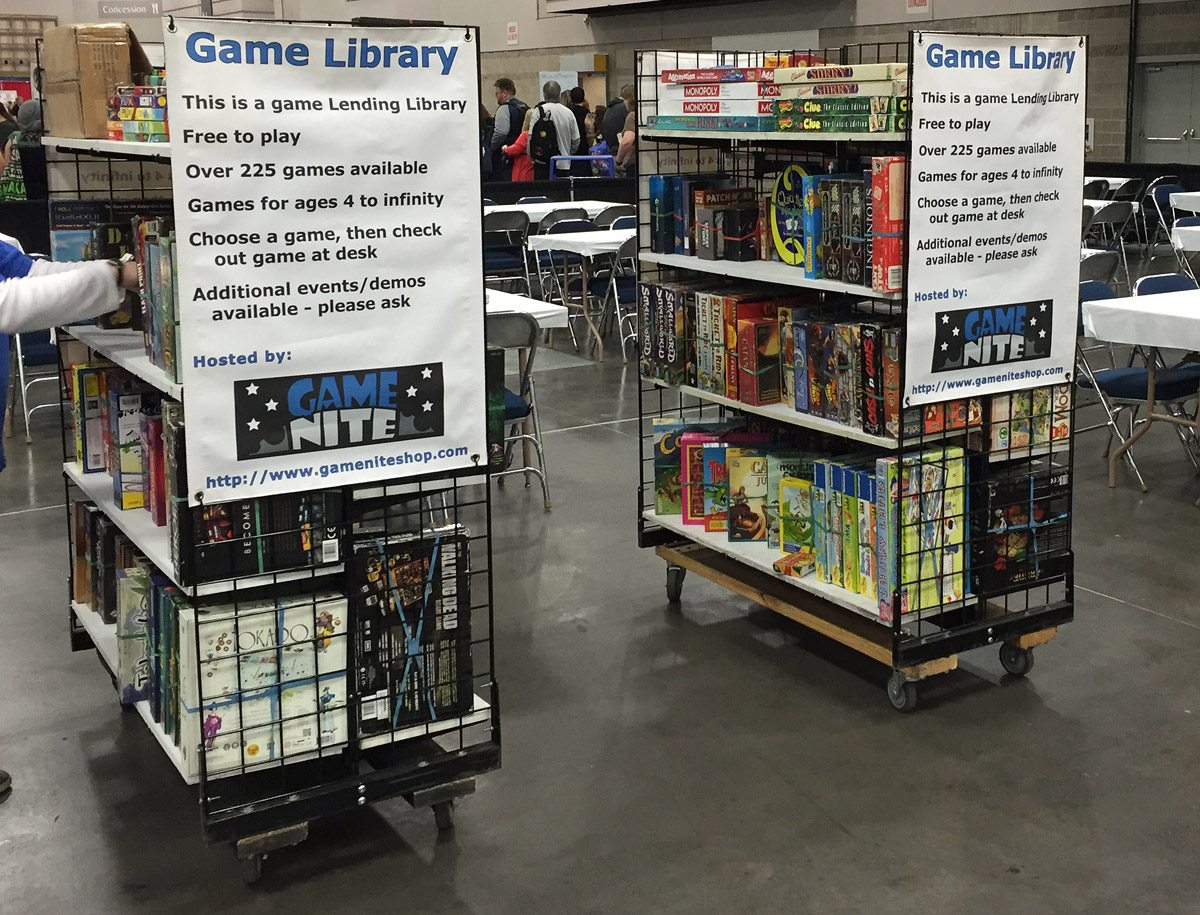 One thing that was really awesome was a lending library of games. Hosted by Game Nite, there were over 225 games available to check out and play freely. It’s always nice to see tabletop gaming represented even when it isn’t a focus of a convention. 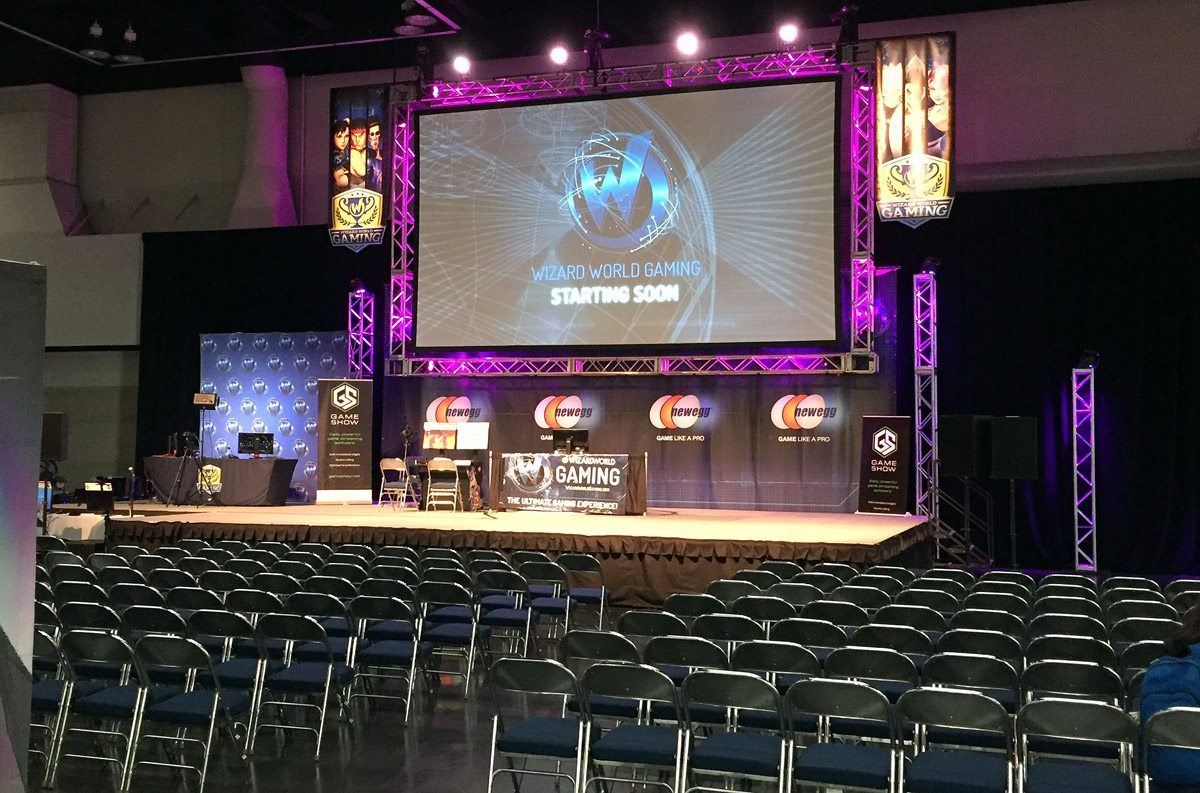 And speaking of gaming, Wizard World Portland was also the premiere of Wizard World of Gaming. I haven’t really gotten into e-sports yet, but the presence it had at the convention proves just how serious it’s becoming. A large chunk of the show floor was dedicated to video game playing and tournaments. If e-sports is your thing, don’t miss the next Wizard World of Gaming event. 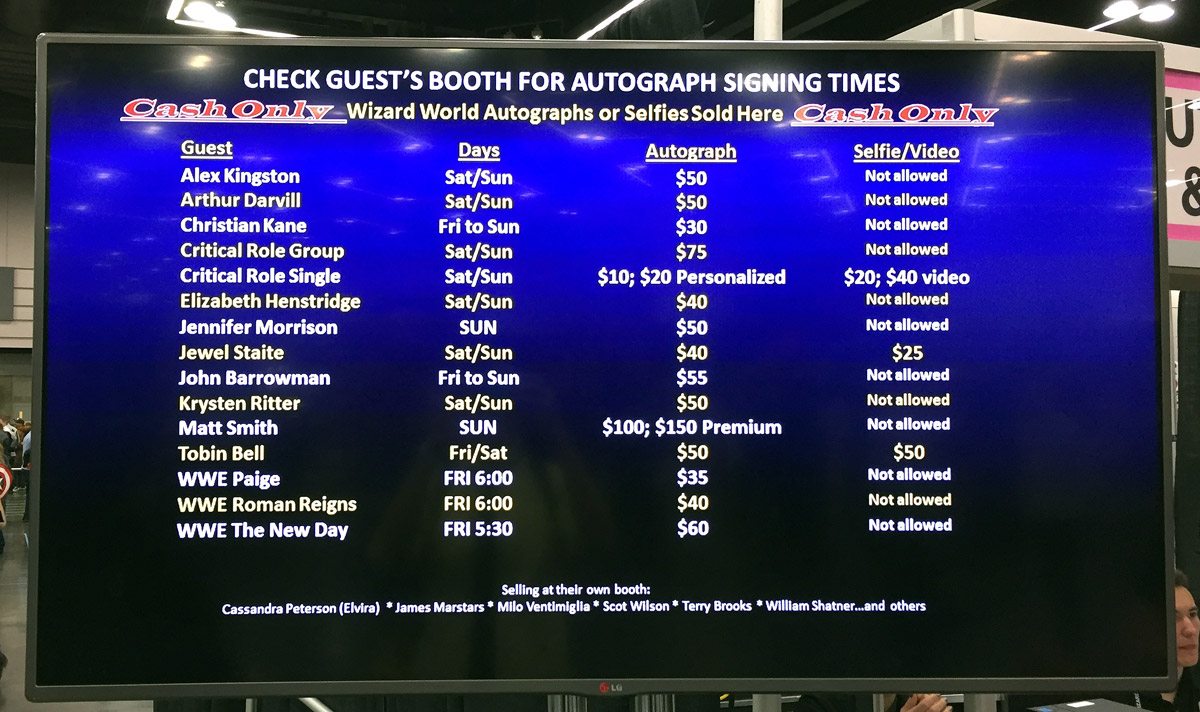 I’m also not a big autograph and photo-op person. To me, it seems expensive and overly hectic and stressful when I’m trying to just have a good time. Wizard World does seem to have this down to a science, though, to negate at least some of the craziness and stress I usually associate with it. Days, times, prices, and what is allowed are clearly displayed on an easy to update video display. Once you buy a ticket, you show up to the appropriate queue at the appropriate time and you’re good to go. If I were an autograph-type con-goer, I would definitely appreciate the process they’ve put together. 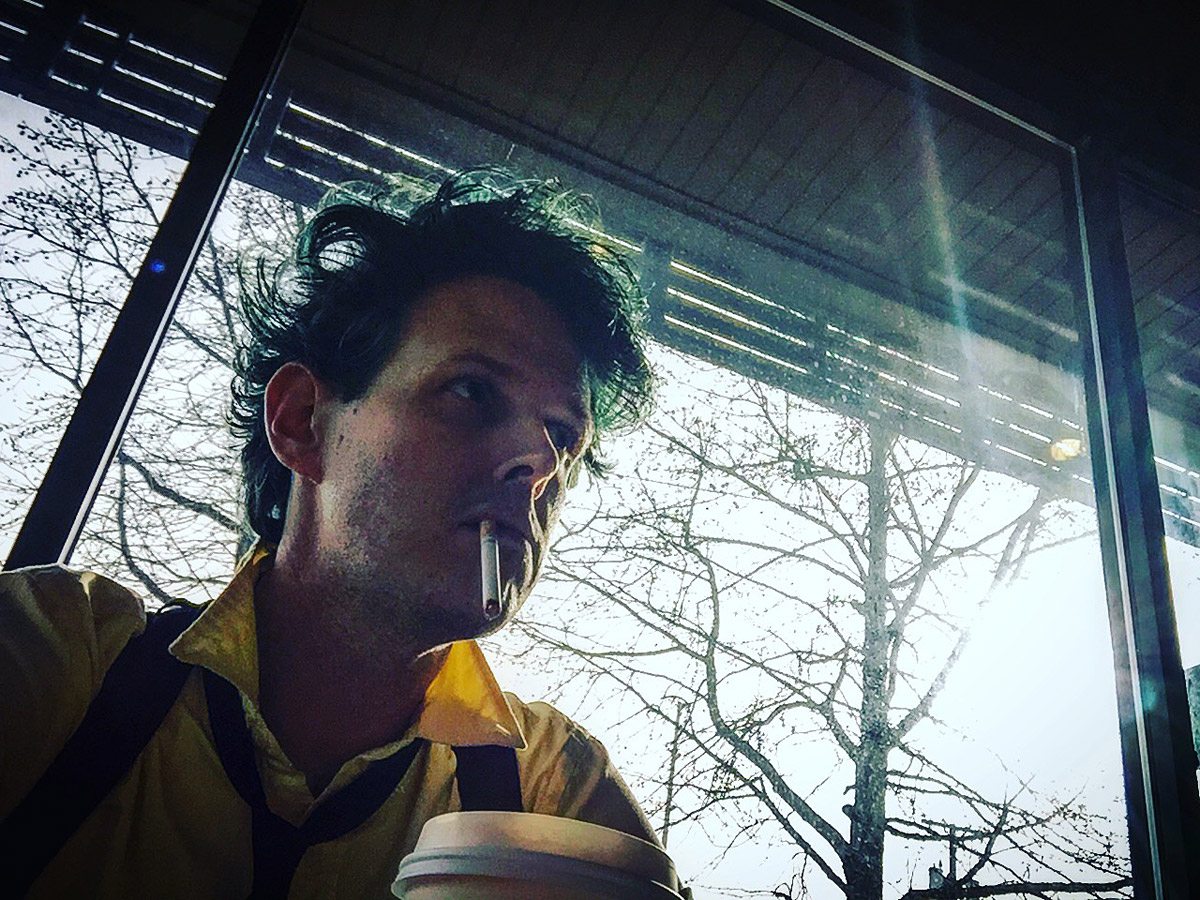 As with any con, at the end of the weekend, I was fairly beat but also very happy at all the great stuff I was able to see and do. I headed to a coffee shop across the street and put my feet up to rest, but tried to never break character. 🙂

Did you attend Wizard World Portland? What were your favorite panels, guests, and/or cosplay you saw?

Celebrating Science and Treasure Hunting With The Jinson Twins

Reaping the Rewards: Can You Survive the ‘Ravine’?