I’ll admit that when DC Comics stated that they would be rebooting Batgirl with a young Barbara Gordon in the title role, I had my reservations. Okay, that’s putting it a bit lightly. Barbara Gordon went through Hell and came out the other side a grown, mature, nuanced character. She had earned her place and had the scars to prove it.

That was my gut reaction. What I wasn’t thinking about at the time was how stale another character–Peter Parker, of Marvel’s Spider-Man–had become in his “old age”. Few raised objections when Marvel returned Spider-Man to his younger, more fun-loving and at times over-confident self. It was a smart move.

Now, Peter Parker isn’t Barbara Gordon, nor is Spider-Man equivalent to Batgirl. That said, putting Barbara Gordon back on her feet and moving her to Burnside, the private-college town borough of Gotham, has injected the title with a new energy and spunk. 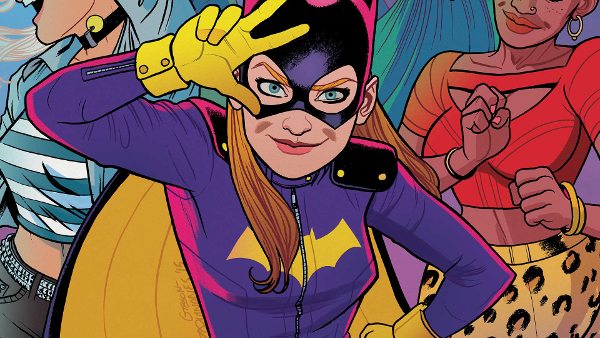 Both this title and Catwoman (see below) take place after the recent death of Batman and the rise of a new, mechanized Batman. In this collection, Batgirl takes on foes like the video game influence Co-Op, Livewire, and Velvet Tiger while coming to terms with her father’s confession about his nightly pursuits, dancing around a lost love interest, and helping plan a wedding.

Written by Cameron Stewart and Brenden Fletcher, featuring art by Babs Tarr, Batgirl: Volume Two is an energetic and engaging look at what it’s like to balance work life (presuming your work is as an unpaid costumed vigilante) and private life. Both the writing and the art and spot-on and inviting to anyone looking for a fun and fast-paced comic.

Recommendation: This book is great for everyone. For girls and young women, it can be a gateway to the larger DC multiverse. Once I’m finished with my copy, I’ll be letting my nine-year old daughter borrow it. I think that seeing a young woman who can do anything the big boys can (and sometimes better) will help build her confidence that she can do anything she sets her mind to, and can have fun doing it. I’ll also loan it out to my eleven year old son once his sister is finished with the book, both because I think it will help create empathy in him by seeing that not every hero looks, acts, and thinks like he does… and because he enjoys reading a fun comic.

Family takes center stage in this Catwoman collection. As I said above, the story takes place after the death of Batman and the installation of a new, Batmech. Selina Kyle has gone from petty thief to inheriting the role of boss for one of the two big crime families carving up slices of Gotham City. The focus of the story is Selina’s honor-bound duty to help the people of her city who cannot help themselves while looking out for her extended family and navigating the minefield that is criminal politics.

The book does a great job of capturing that The Godfather feeling. Selina has the family business thrust upon her, but rather than shrug off that burden, she takes on the full weight of the role and does her best to secure the family’s interests. As you’d expect when dealing with Gotham’s crime families, some loyalties are tested while others lead to out-and-out betrayal. 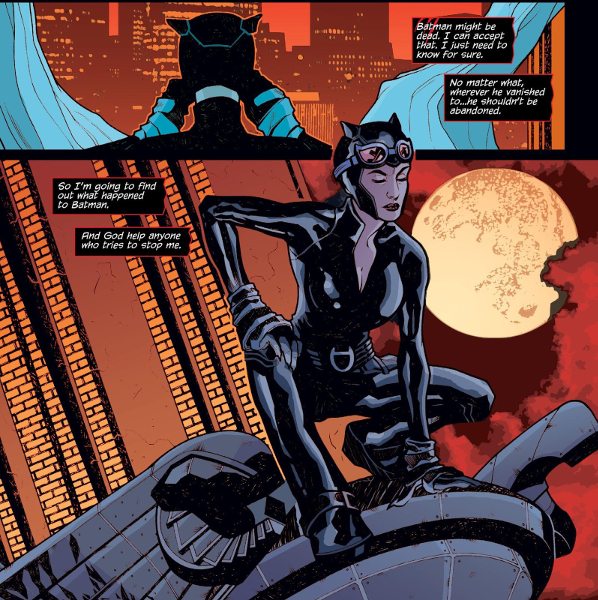 Though this is the seventh collection of the Catwoman title in its current run, collecting issues #41-46, the writing by Genevieve Valentine is engaging and quickly brings the new reader up to speed and reminds the veteran reader where we are in the story without speaking down to or over the head of either. The art by David Messina and Lee Loughridge is by turns sharp, soft, and sensual as the scene dictates.

Recommendation: This is another must-buy for those who are interested and invested in the workings of Gotham City. The themes are more mature than you’d find in Batgirl, as they deal with crime, death, and criminal politicking. As stated, it evokes that old-school 1970s crime drama feel. Buy a copy for yourself, then decide who in your family to share it with.

Both Batgirl: Volume Two and Catwoman: Volume Seven are on sale this week at your local comic store and wherever trade paperbacks are sold.

Disclaimer: Review copies were provided; the opinions above are my own.

This is the Hoodie You Were Looking For

Review – The Batman’s Grave #6: Death in the Halls