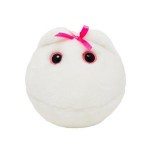 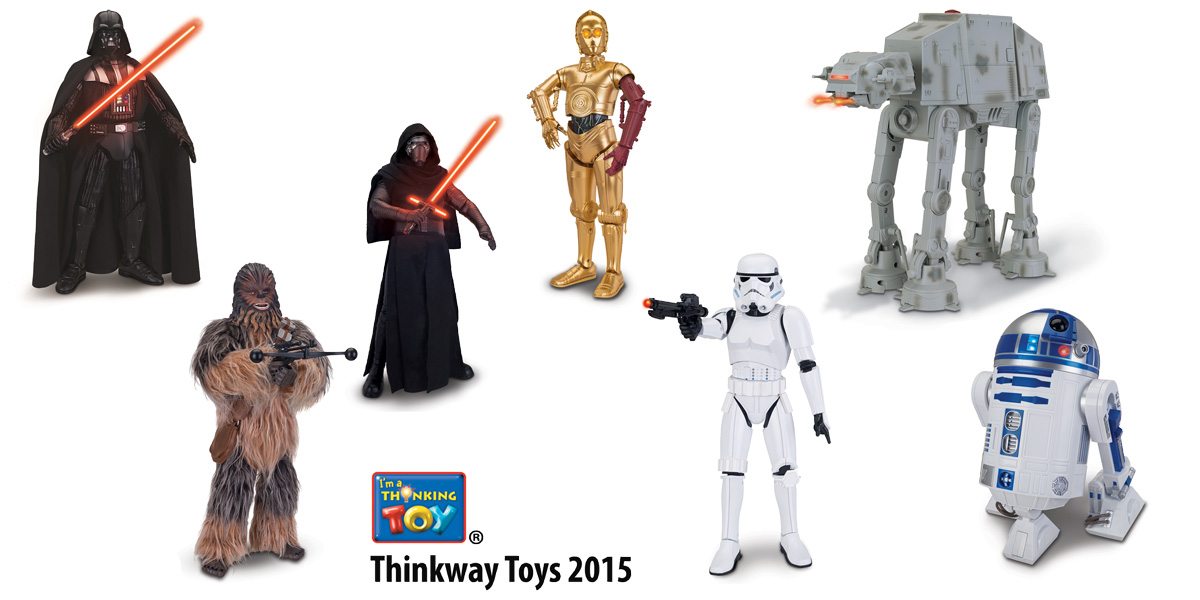 Star Wars is pretty big at the moment. Have you heard? The merch is abundant, and there are some pretty incredible toys available. Not to be outdone by any of its competitors, Thinkway Toys has released a line of animatronic toys that bring a little bit of the saga to life on your living room floor.

The line of interactive figures includes R2-D2, C-3PO, Darth Vader, Chewbacca, Kylo Ren, a Stormtrooper, and an AT-AT. A few of us here at GeekDad HQ received different models and took them for a spin.

Interestingly, each character is a bit different in terms of what it can do and how it reacts to various stimuli. Thinkway claims that the toys also respond to one another, but unfortunately we were unable to try out that feature.

What’s common to all characters is that each is interactive, has authentic movie voices/sounds/effects, and sports a fair bit of articulation. They’re also exclusive to Toys ‘R’ Us.

The results of our totally adult professional experiments are below. 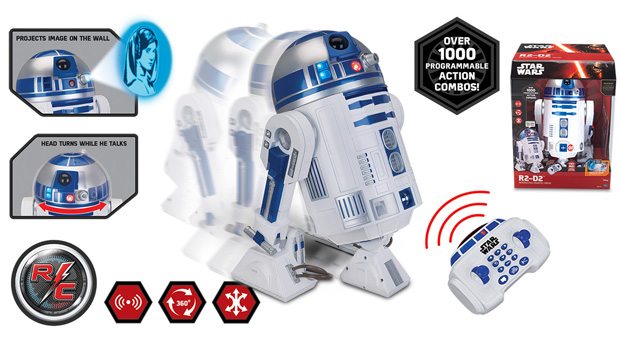 R2-D2, by default, best lends itself to the remote control format. It’s kind of obvious to see why. R2 is also fairly easy to control. The remote has two joysticks. Push either one and he moves forward or backward while turning. Push both at the same time and he moves in a straight line. Push both in opposite directions and he spins.

There are also buttons to make him spin, rattle off his various beeps and boops while turning his head and doing different tricks, and project Princess Leia’s holographic message (make sure you’re in a darkened space). He’s also programmable, so you can program a sequence of moves into his short-term memory. Apparently, there are more than 1,000 combinations, but I can’t verify that.

The box and manual claim that he responds to your voice, but I’ll be darned if I could get him to do anything. True to his character, he doesn’t really like to listen, I suppose.

I have to say that this guy is a lot of fun and works far better than I was anticipating. He needs a hard surface, though, so don’t expect him to work very well on carpet. He also has a wide turning radius, so if you want him to turn around while moving forward, you’ll need some serious space.

R2 isn’t cheap, so if he was any less than impressive, it likely wouldn’t be worth it. As it is, this type of toy has a limited life span among kids’ attention spans. This very well may be one of those toys that gets played with for a few hours and then forgotten. So, keep the price point in mind if you’re deciding if this one is for you.

In the meantime, enjoy this video of R2 in action…

The Darth Vader figure stands about 16″ tall, and has 31 points of articulation, according to the box. I didn’t count all of them, but that seems about right: his joints bend and there are various places where limbs can rotate, too, like his wrists, upper arm, and thigh. His left hand can open or clench into a fist (though the fingers don’t bend individually), and even his toes can be bent so you can put him in some action poses. The joints are stiff enough that he can stand unsupported if you have him standing flat-footed.

Darth Vader has a couple of play modes: Talk, Battle, and Training, which can be switched by tapping the button on his chest plate. The mode is indicated by one of the phrases he says.

In Talk mode, you lift his left arm briefly–he will then play quotes from the movies, accompanied by his famous breathing sounds, while moving around and gesturing. The animatronics control his left arm (at the shoulder), his head, and his waist, so you can pose the arm ahead of time and then he raises and lowers it. In Battle mode (which seems to be concurrent with Talk mode), you can wave the lightsaber around, and it plays noises and lights up.

Switching to Training mode by pressing his chest plate, you move the lightsaber around, and after every 10 moves or so, he’ll say a line from the films. The quotes he uses indicate how well you’ve done–from “You have much to learn” to “Obi-Wan has taught you well.” There are four levels, depending on how quickly you move the lightsaber, and reaching the top level is actually quite tricky, especially considering you’re not supposed to twist him at the waist while you’re doing it.

I enlisted my older daughters to help me test it out, since we’re going to wrap it back up to give to my Vader-obsessed toddler for Christmas. Technically it’s meant for ages 4 and up, so I’m going to have to keep an eye on my daughter–you aren’t supposed to twist his head and waist while playing with him because of the animatronics.

The details are pretty nice. He has a removable cape and a robe underneath that. The shin guards snap on and off also, and you gotta love the sounds when the lightsaber turns on and off. There’s a small switch on his back, hidden under the robe, to turn him off permanently (or put him in “demo” mode as he is in the packaging). In regular mode, he times out after a few minutes of inactivity.

My older daughters enjoyed playing with him for the few minutes before I told them he had to go back in the box, but I’m excited to see how my toddler reacts. I guess it won’t take too long before we’ve heard all of his quotes, but somehow I think we won’t get tired of hearing them. 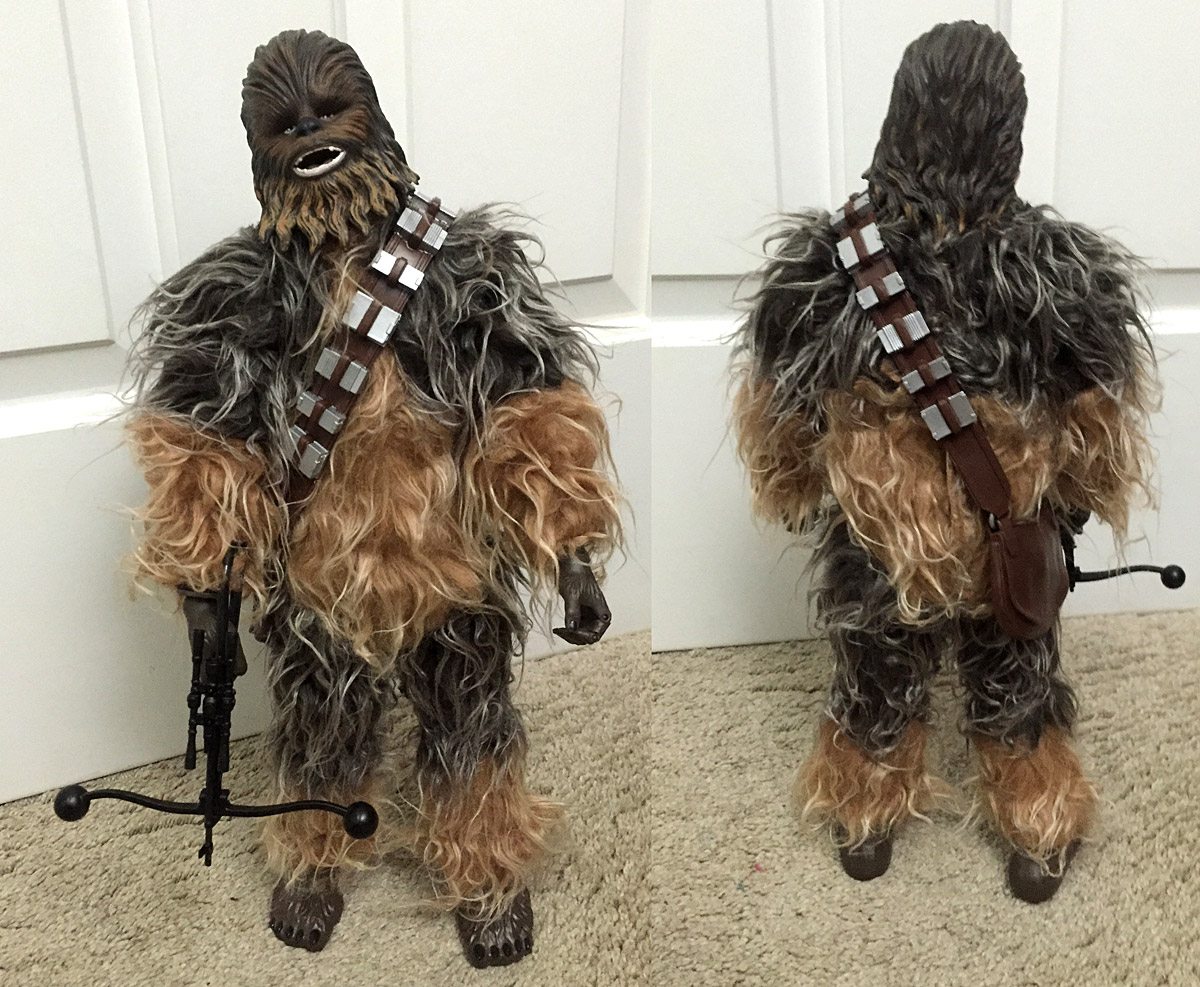 Just like Darth Vader, the Chewbacca figure has 31 points of articulation. It was hard to try to count them due to all of his fur, but he does move around a lot, so I’ll take their word for it that they are all there.

The details on Chewie are nice–the head is rubberized so that his mouth actually moves when he talks, his hands and feet are hard plastic as is the bowcaster. His bandolier and satchel are a softer plastic but are stitched to his fur and not removable.

Chewie has two basic modes–talk mode and combat mode. After turning him on, you activate combat mode by raising his right arm (with the bowcaster). He will raise the bowcaster with both hands and start firing in multiple directions. Raising his left arm enables talk mode. Saying things to him will cause him to respond with authentic Chewbacca “quotes.” If you raise your voice–by yelling out “Chewie FIRE,” for example–he will do just that. I have a feeling he’ll auto switch to combat every time my two-year-old talks to him.

I’m currently keeping him a surprise for Christmas morning, so we’ll see how much my two-year-old likes him. Based on the fact that Chewie is one of his favorite Star Wars characters, and he does his own impression of him, I’m sure it will be a big hit. Unfortunately, I’m not very fluent in Wookie, so Chewie doesn’t seem like quite as much fun as the other toys in this line. He also seems to be a little less interactive than the others. 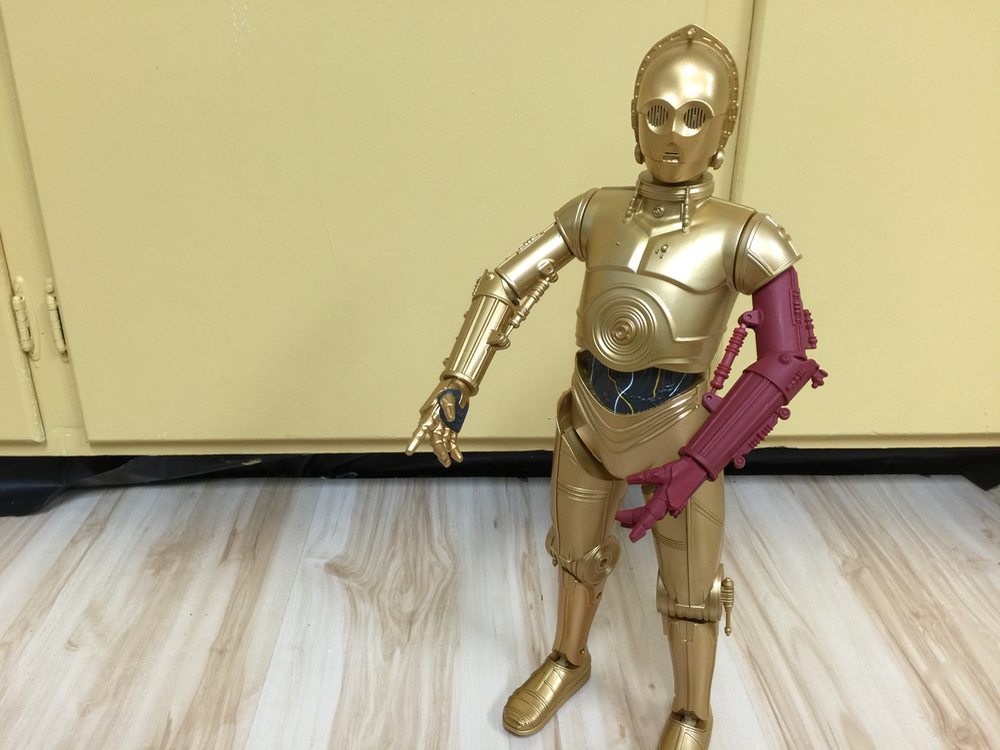 C-3PO, everyone’s favorite protocol droid, is sporting the red arm from The Force Awakens and has numerous functions. He is “fluent in six million forms of communication,” but for the ten-plus phrases this interactive robot droid will say, expect only English. After freeing Threepio from his carbonite-esque, near-indestructible storage container, I had a chance to try him out. His arms are poseable, and when you activate his functions he will turn his head side-to-side, rotate at his waist, wave his arms, and even, to my surprise, walk by shuffling his feet with the same lack of mobility as the real C-3PO. He says some of his most well known phrases such as, “R2D2 where are you?”; “I don’t like the look of this”; and “I’m going to regret this.” Pushing his front button will make him say random phrases, move his head, and wave his arms. Pushing the button on his back produces some more sayings, and his shuffling walk. You can also put C-3PO into a mode where he responds to your voice. This essentially acts as if you are pushing the front button as he says random phrases.

If C-3PO gets knocked over or falls down he exclaims, “OH!” but please treat him with respect, we don’t want to be a ro-bigot and propagate any specisim.

The awesome AT-AT is one the Galactic Empire’s most destructive vehicles of war, and now you can control one of your own with a wireless remote control! However, in a weird twist of irony, the RC AT-AT is the smallest toy in the Thinkway lineup. It stands right under one foot tall, which feels out of place with animatronic action figures that are more than twice that. Don’t let that sway you from the power of the Dark Side with this toy, though, becuase it is a blast to play with.

You would think that a four-legged remote control vehicle would really be able to walk forward and maybe backward, but this thing has a full range of motion in all directions: forward, backward, left, and right. Like the R2 unit, it can be pre-programed also, to a set of commands. Using the remote buttons, it can be set to move to a location, fire, and move again–but that is thinking small, you can pre-program over 1000 action combinations.

We have had the most fun storming through Star Wars Command sized toys. It makes quick work of taking down these army men-sized Rebels. The head moves, fires, and has sound effects, which really make this a fun piece. 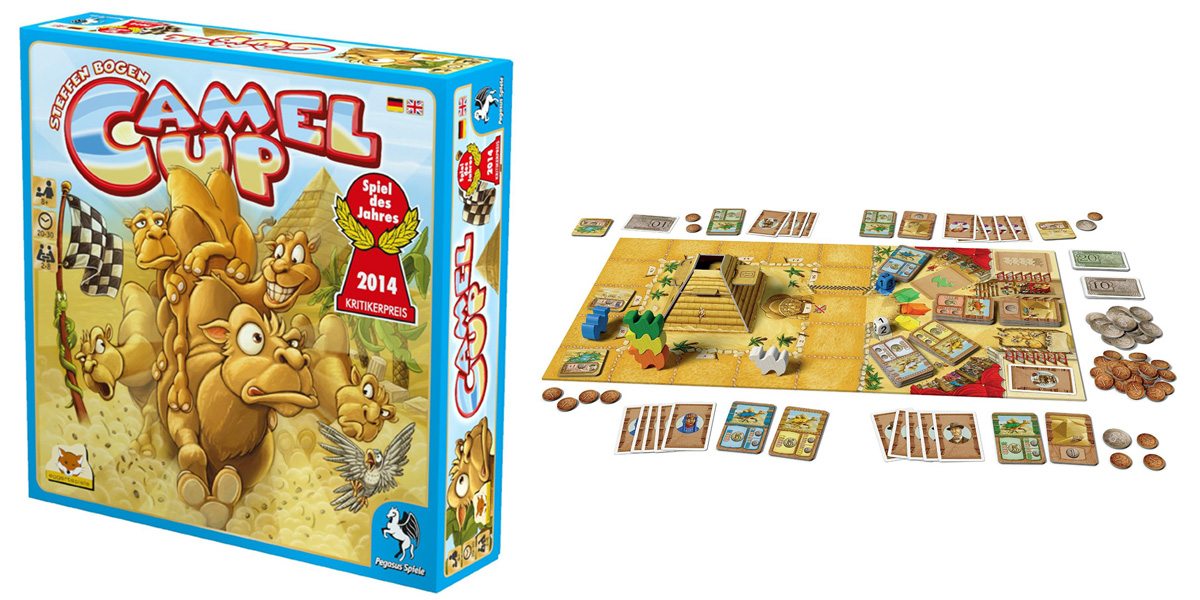 Game of the Week: ‘Camel Up’ 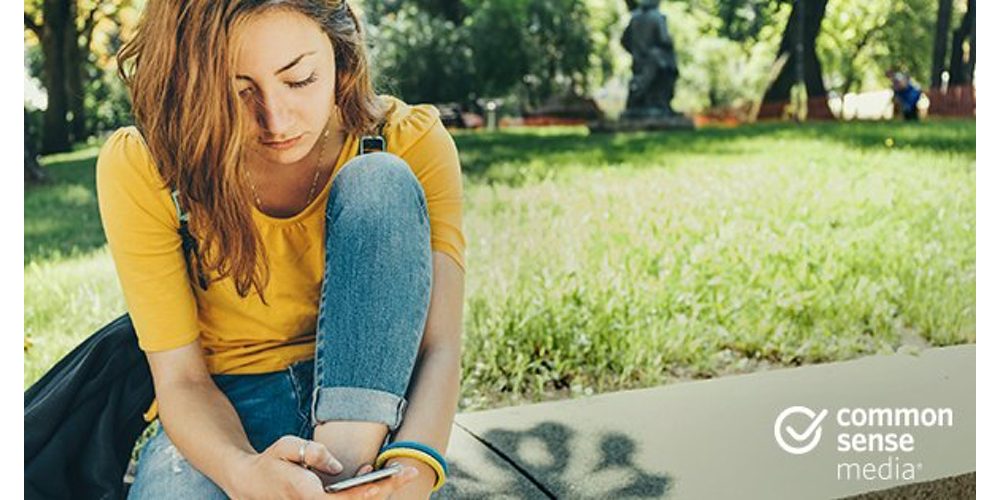