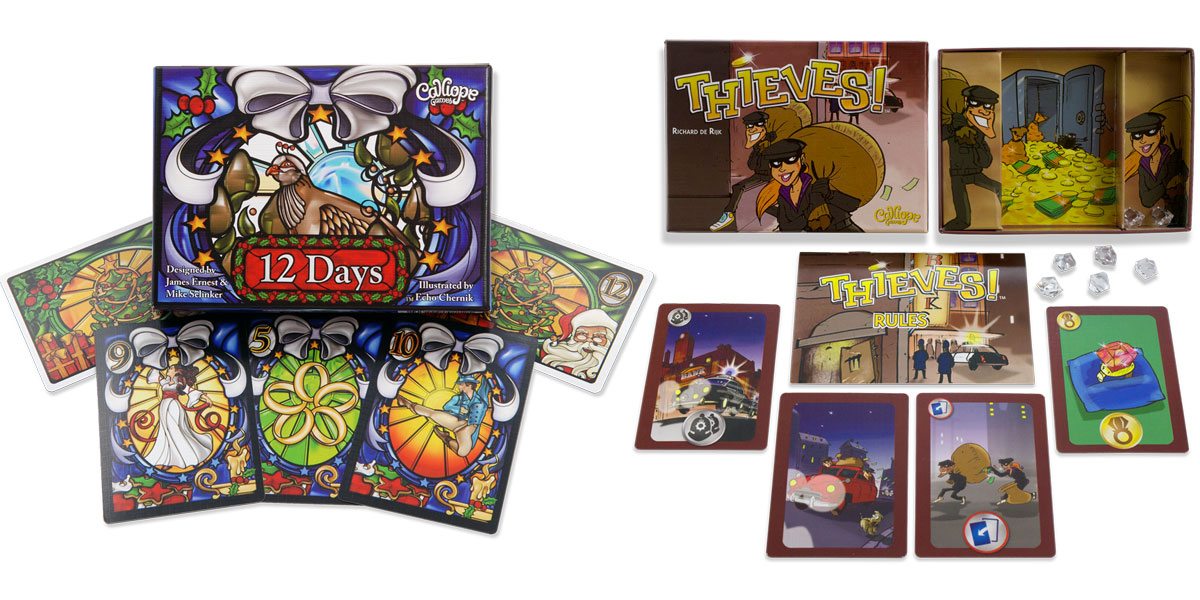 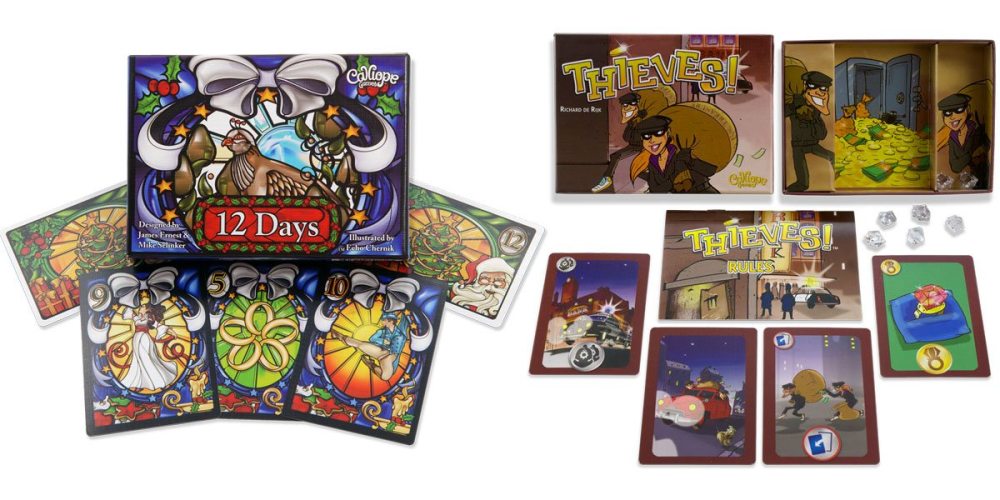 What’s better than a new game from our sponsor Calliope Games for the holidays? How about TWO GAMES from Calliope! That’s right, the publisher that brought us Tsuro, Roll For It, Ugh!, and others has two great, new, small games for the holidays. Both games are for players aged eight and up and take about 15-20 minutes to play.

The first, 12 Days, is the perfect stocking stuffer for anyone on your Christmas list because the game is full of drummers drumming, lords a-leaping, and all the way down to a partridge in a pear tree. There is a severe shortage of Christmas-themed tabletop games, but 12 Days is not only Christmas themed, it is a really fun game! The game was created by well known designers James Ernest (Lords of Vegas, Pairs, and more than 100 other games) and Mike Selinker (Pathfinder Adventure Card Game, Betrayal at House on the Hill, Axis & Allies, many others). 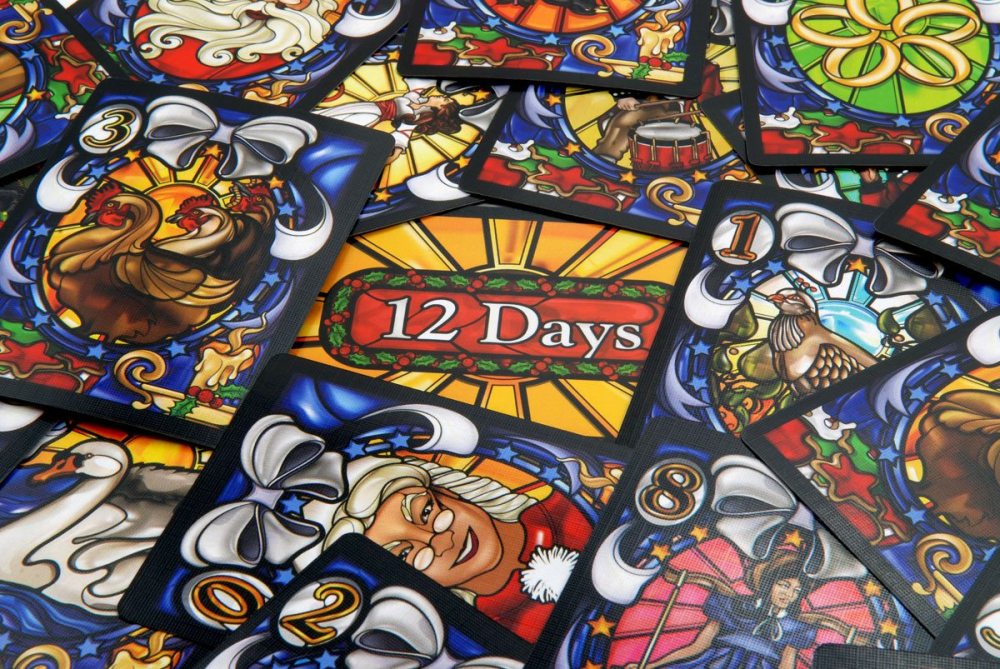 12 Days is a bidding/set taking game. There are 80 cards (two turtle dove cards, three french hen cards …) in the deck and three to five players can play. Players begin with 12 cards in their hands. Players “gift” a card to their neighbor each round before playing a card. Lowest card wins the day, of which there are 12, natch, and the twelfth day is worth the most points at the end of the game. Each round, everyone draws up to 12 cards and play continues until all 12 days have been played.

It’s a fun, fast-playing game that you can play several times while waiting for Grandma to open her gift in a way that she can save the wrapping paper for next year. Plus, the cards are flat-out, unbelievably beautiful. Illustrated by the extremely talented Echo Chernik, you will drop your jaw while sorting through this deck. 12 Days is a fun, gorgeous game and a must-buy for any Christmas celebration. 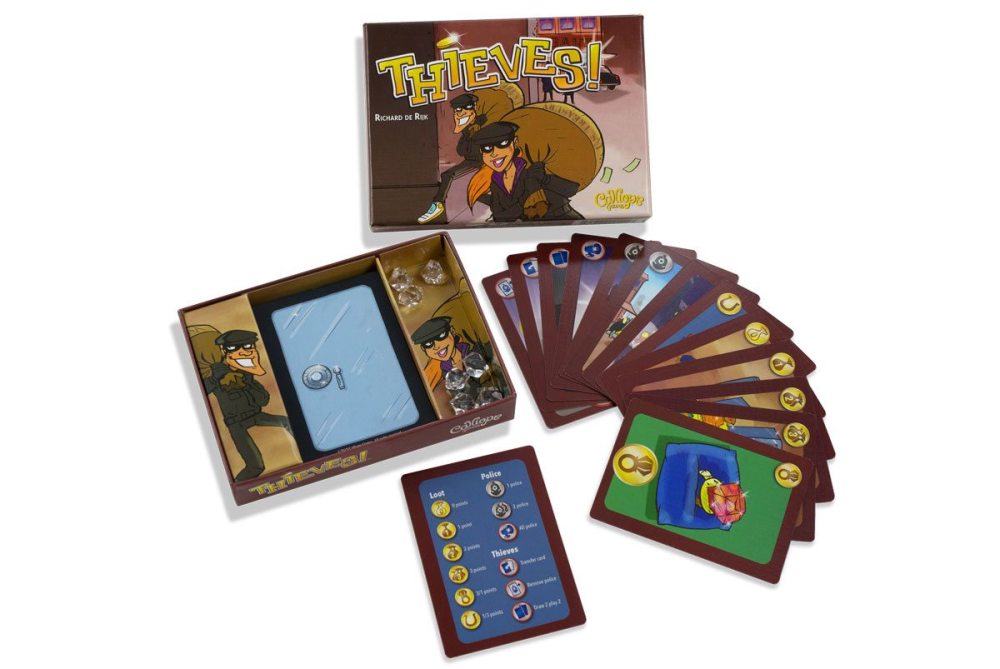 Shifting gears, just a bit, Calliope’s other game is Thieves! by Richard de Rijk (Atta Ants, Anera’s Arena). Here, players try to be the thief with the most loot at the end of the game. The safes have already been cracked, but the sirens are wailing and its flat-out mayhem. The cops are after you, but can you elude the flat feet and your partners to end up with the lion’s share?

Thieves! has 52 cards and a number of gem tokens. The comical art by Björn Pertoft does a great job of setting the scene and the cardbacks are cleverly covered with safe doors. To play, 3 to 6 players each get 3 cards facedown. (Any Getaway cards are shuffled back into the deck and replaced with non-Getaway cards.)

At the beginning of each round, players draw up to 4 cards and place any Getaway cards face up in front of them. Next, players play cards. Cards can be loot cards and played either facedown in front of you (your stash) or face up in front of another player, making them a bigger target when the police raid. There are Special Loot cards, which have unique rules, and Police cards, which are gathered in the center of the table. Once there are four police helmets, a raid is triggered and the player with the highest loot total is busted and loses their stash. Any stash that’s not lost remains in front of the respective players.

There are a number of special Thief cards, which trigger special abilities like drawing extra cards, moving loot between players, and wiping the police cards clean. The game ends after the seventh Getaway card is drawn and the player with the most loot wins!

Both are great games, very family friendly, and fun for all ages. Be sure to grab copies of 12 Days and Thieves! for everyone on your holiday shopping list! 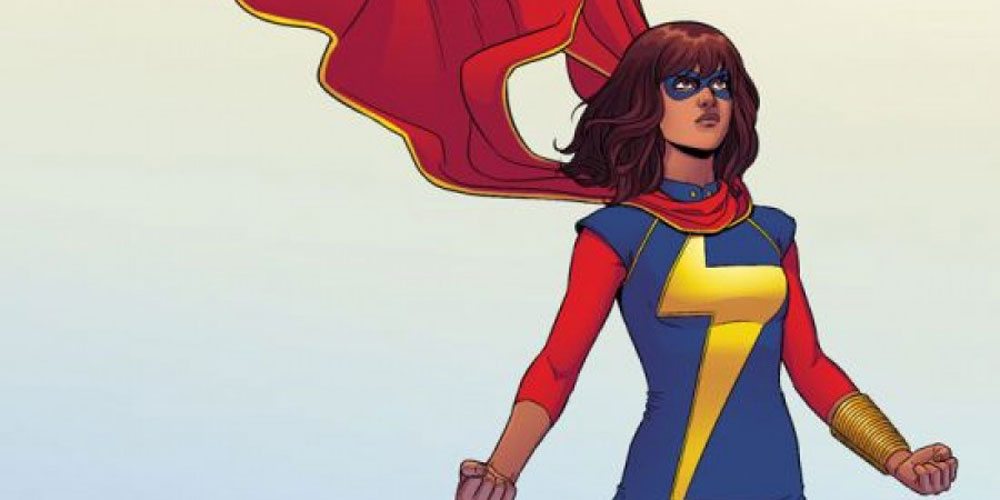 The Vocal Minority of Comic Fans Needs to Stop Talking