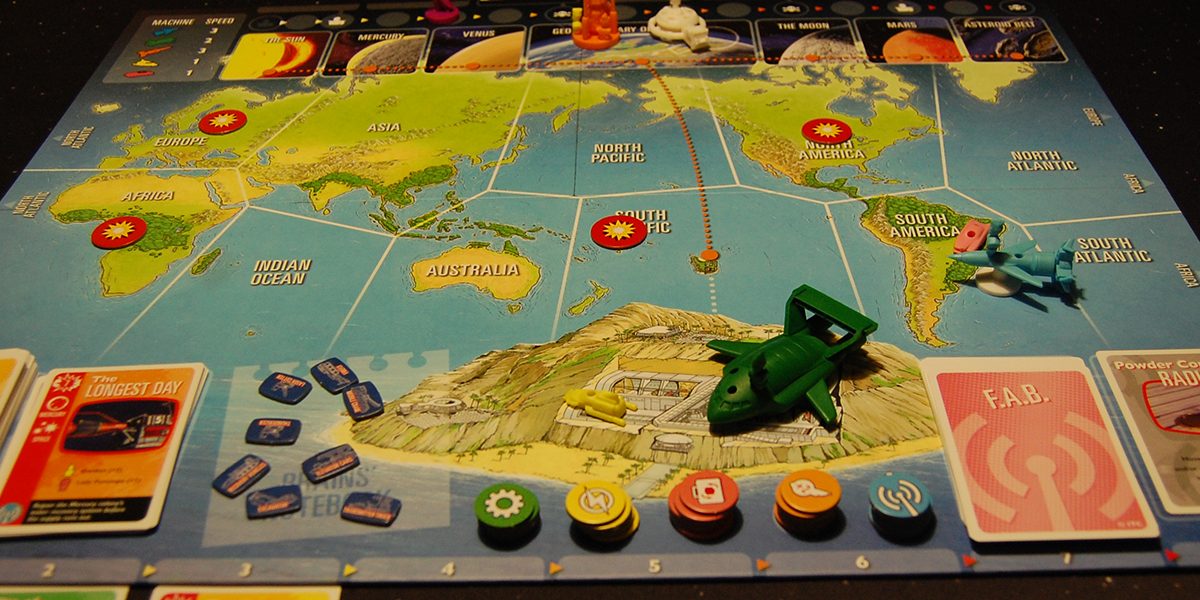 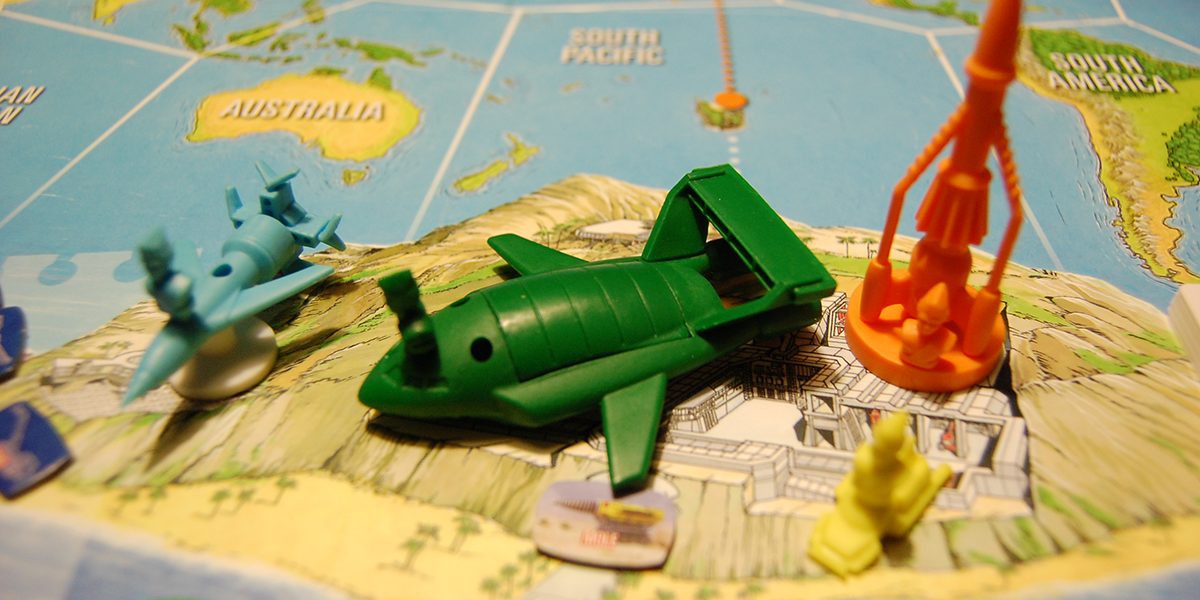 2015 marks the 50th anniversary of Gerry Anderson’s wonderfully campy “supermarionation” TV series The Thunderbirds. As part of that celebration, British game design company Modiphuis commissioned legendary cooperative game designer Matt Leacock to bring the series to life. The game was launched back in February on Kickstarter and reached its initial funding goal in less than a day. It eventually ended up raising over $350,000, meeting most of its stretch goals along the way.

I got the chance to test a prototype of the game and write up a review back during the Kickstarter campaign. I then did a follow-up interview with Matt Leacock to talk more about the game, as well as some of this other titles like Pandemic Legacy.

Over the last few weeks, Modiphus has sent copies of the completed game out to the Kickstarter backers, and were nice enough to send me a copy as well to do a follow-up review of the final product.

At a glance: In Thunderbirds, you take on the role of one of the members of International Rescue. Working together with the other players, you travel around the world rescuing people and averting disasters while trying to collect enough materials and bonus tokens to avert three schemes plotted by the nefarious villain Hood. If your team can defeat Hood’s schemes before he enacts them, you win, but if he manages to pull even one of them off, or if you fail to avert any of the disasters before they make their way down the disaster track, you lose.

I was impressed by the quality of the all of the components. The cards are all high-quality, linen-backed cards that should last through repeated plays. The artwork is all taken straight from the show. The board is heavy cardboard with beautiful artwork. It’s honestly a bit smaller than I expected, but it’s not any bigger than it needs to be, and because the game requires that cards be placed both above and below it, the size actually works out really well. They also managed to make the spaces big enough that several vehicles can comfortably fit on each space at once. I was able to set up the game without any trouble on my coffee table, which is fairly rare these days.

When I was a kid, the thing that attracted me to Thunderbirds was the ships, particularly Thunderbird 2. The models of the ships in the set are great: they’re finely detailed and sturdy. And best of all, Thunderbird 2 has a removable top that allows you to put the POD vehicles, or even Thunderbird 4 or the F.A.B. car, inside. Gotta love that.

Setting up the game involves placing the board on the table, placing Thunderbird 5 in the Geosynchronous orbit space, and placing all of the other Thunderbirds ships on Tracy Island. The F.A.B. car goes on Europe, and the Hood figure goes on the first space of the Hood track. Each character peg is placed in its corresponding vehicle. Shuffle the character cards and deal one to each player, placing the remaining characters back in the box.

The tokens are sorted by type and placed on their respective spots on the board. The POD vehicles are all placed, blue-print side up, on Brain’s Notebook.

The cards require a bit of additional prep. You need to sort the Scheme and Hood cards. Then, four Scheme cards are chosen at random and placed on their spots at the top of the board. One card from each of the first three Hood decks is also drawn and placed in their spots above the board. The remaining Scheme cards are returned to the box. (The game includes a fourth deck of Hood Schemes for advanced players.) The F.A.B. cards can be simply shuffled and placed in its space on the board.

The game contains one of my all-time favorite start player instructions: “The person who most recently watched the Thunderbirds TV show does first.” That will almost certainly be me every time we play.

On each turn, a player can perform up to three actions from four possible options: move the vehicle they’re in, avert a disaster, plan, or scan.

Each Thunderbirds vehicle has a set number of spaces it can move, which are handily printed on the board. So if the player chooses the Move action, she can move her ship up to the allotted number of spaces.

Averting disasters involves moving to a specific space on the board and then rolling the two custom die. If your roll is greater than or equal to the number printed on the card, you’ve averted the disaster so the card is discarded and you get the reward printed on the card, which is almost always one or more bonus tokens. If you fail, you can try again.

Most disasters have conditions applied to them that give you bonuses on your roll. This may involve moving some other vehicle to a designated space, or having certain characters present. There bonuses are added to your roll and increase your chance of failing the test.

The Plan action allows you to draw the top card from the F.A.B. deck. All of these provide bonuses to help on your quest, but if you choose this action you advance Hood, so be careful.

Scan can only be done if you’re in Thunderbird 5 (the space station), but it allows you to shift the disaster cards back a space, giving your team a bit more time.

Characters also have special abilities which can be played as actions. You can take the same action more than once on your turn, so for instance if you’re in a vehicle with a speed of one, you can move three spaces on your turn but not do anything else.

Also on your turn, you can do any number of free actions, which include moving characters between vehicles as long as they’re in the same space, loading and unloading PODs, Thunderbird 4 or the F.A.B. car into Thunderbird 2, playing the bonus tokens, or playing a F.A.B. card.

At the end of each turn, a new disaster card is drawn. If it’s one of the eight “Hood Advances” cards, then you move the Hood figure forward one space on the Hood track. If he lands on an Event space, you slip over and resolve that event immediately. They tend to be annoyances for the characters, such as limiting the movement of certain vehicles. However, if Hood advances into one of the three Scheme spaces and that scheme has not yet been resolved, then the players immediately lose the game.

Most of the disaster cards are just more disasters to try to avert, but in order to add a new one, all of the existing cards have to be shifted down the track. If one of the disasters reaches the eighth and final space on the track, the players lose. (So far, this has been the way we’ve managed to lose pretty consistently.)

There is also a specific set of rules for playing the game solo, which is always a nice addition.

The Thunderbirds game is a fun cooperative title. We’ve found it’s generally easier than other Leacock titles–while we have lost a few of the games we’ve played, our win/loss record is much higher than Pandemic, Forbidden Island or Forbidden Desert. What makes Thunderbirds special, though, are the miniatures and the way the game perfectly captures the theme from the series. While people who have never had the pleasure of watching the show will still enjoy the game, fans of the show finally, half a century later, have a way to immerse themselves in the world of International Rescue. And that’s F.A.B.

Icebergs and Vampires: A Little Horror With Your Titanic Story?

1 thought on “Reaping the Rewards: ‘Thunderbirds Co-operative Board Game’”