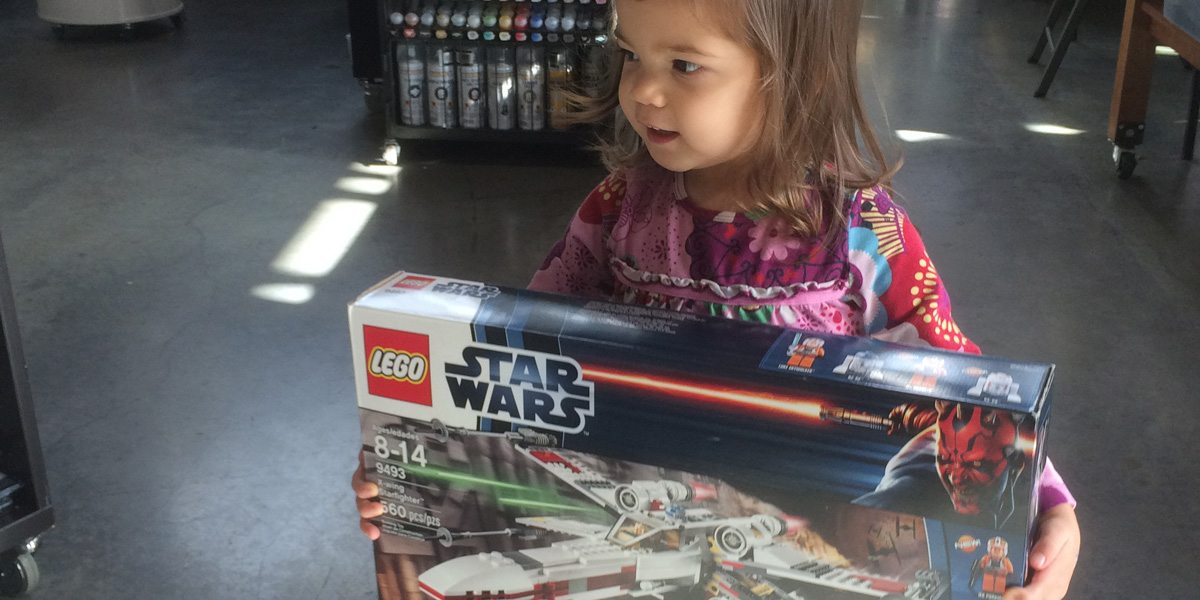 When we watched the original Star Wars trilogy recently with our older girls, our toddler watched most of it with us. (We would pause the movie to get her to bed, and then continue watching.) It’s not clear how much she really understood what was going on, but she definitely learned to recognize some of the characters like R2D2 and “Creepio” and Yoda.

This week when we went to our local game store, she saw a plush goblin from Pathfinder and asked if it was Yoda. Then she wandered over to the LEGO area. I saw her looking at the LEGO Friends sets, and went to the next section to pick some Pathfinder minis. When it was time to leave, she ran over, grabbed the X-wing set, and toddled back to me, saying, “Daddy, you should buy this!” Believe me, I was tempted.

And then there’s Darth Vader. When he first appeared on the screen, she started mimicking the sound of his breathing. When the Imperial March started playing, she stood up and danced! Lately she keeps asking us to sing the “Star Wars song”–sometimes she means the theme song, but quite often what she really wants to hear is Darth Vader’s theme instead.

She’s latched onto my copy of Tom Angleberger’s Beware the Power of the Dark Side!, the middle-grade novel based on Return of the Jedi, even though it’s mostly text with just a few illustrations scattered throughout. (Note: it’s the one with Darth Vader on the cover.) I keep finding it at the dining table, where she’s pulled it off the bookshelf to peruse.

To top it all off, yesterday I caught her on the baby monitor after she woke up from her nap, singing to herself:

Yes, the Force is strong with this one. But she seems to be leaning toward the dark side.

An Irrational Anthem For Pi Day

13 thoughts on “The Force Is Strong With This One …”