Last night, as soon as I got home, I fired up Fallout 4 and Twitched my first hour of play. I had pre-loaded the game two days before so I could jump right in. (Good thing, too, since it was an almost 30 GB download!) 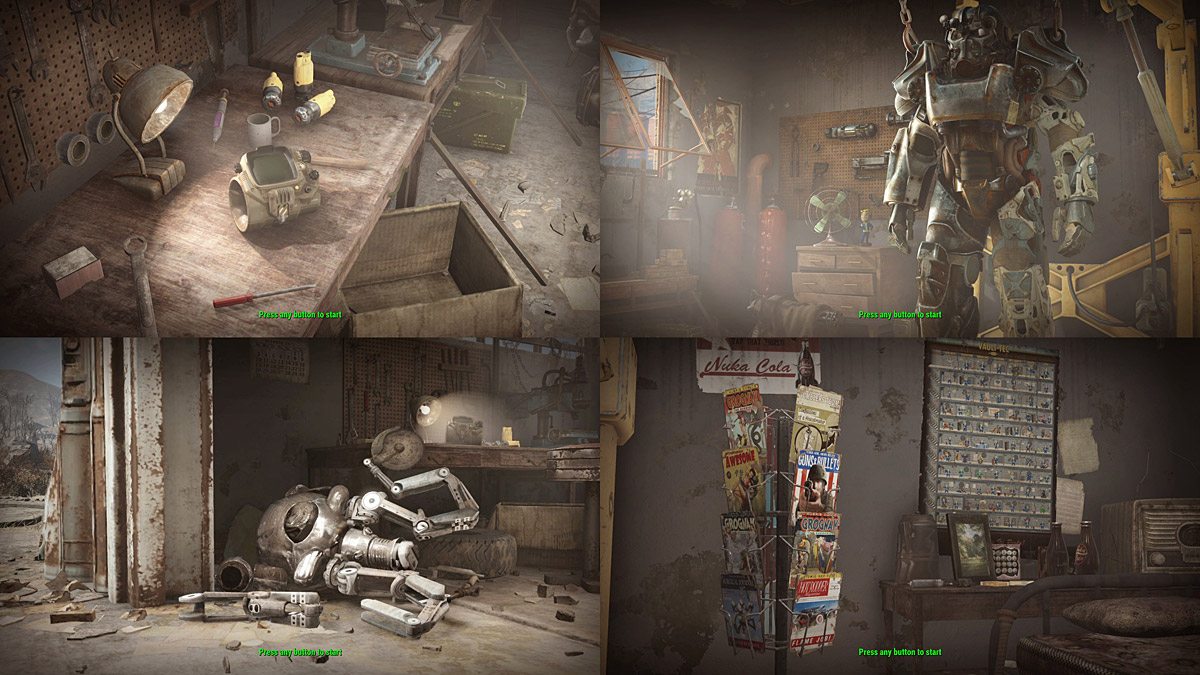 The game starts out with a cool looping sweep through a workshop with all your favorite, familiar things you have been waiting to see–a Pip-Boy, a suit of power armor, bobbleheads, a Mr. Handy, a rack of comics (GROGNAK!), Nuka Cola, a Perks poster, and more!

Starting a new game drops you into a great cinematic that explains the familiar story of how the world got to where it is–war lead to nuclear power, which lead to sustainable power and peace… until it finally lead to war and annihilation. As we all know by now, “war never changes.” 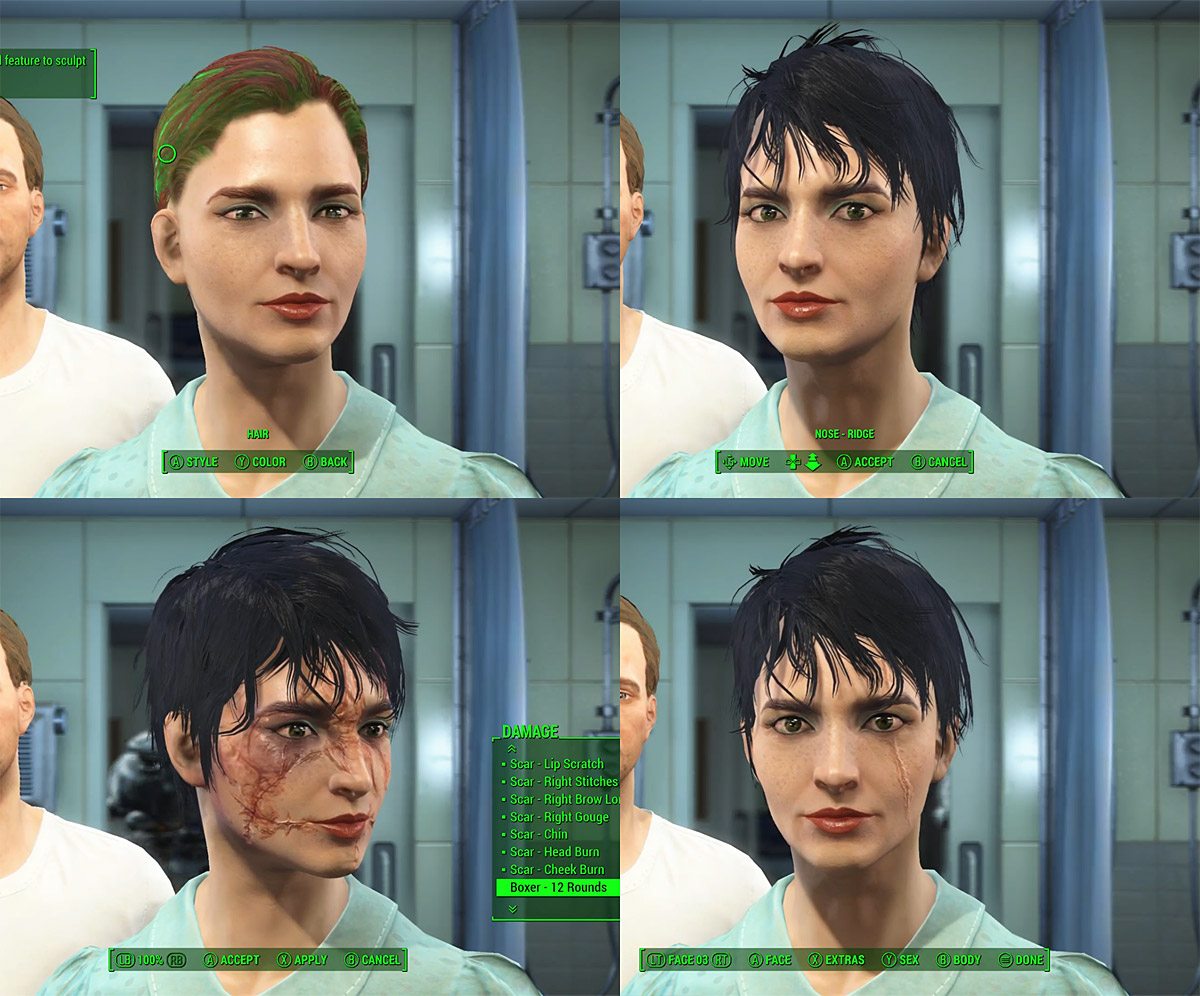 After the cinematic ends, you are dropped into your home, pre-apocalypse. You can modify both the male and female (husband and wife), but you’ll have to choose one of them to actually move forward with. I slightly modified the male, before moving to the female and tweaking her. I played around with a lot of the mods but didn’t end up doing a whole lot–I did give Claire a pretty righteous scar, though. You can see my full Character Builder video on Twitch.

I’m intentionally skipping over what happens after the little pre-apocalypse and post-apocalypse intro before you actually get to start playing (and learning) the game. There are some pretty interesting and surprising story reveals that happen early on, and, while you can see them all in the Twitch video, I don’t want to ruin it by writing about it here.

As soon as you find the gun in the Vault, you get to play around with V.A.T.S. V.A.T.S., for anyone new to Fallout, stands for Vault-Tec Assisted Targeting System. Using V.A.T.S. allows you to specifically target parts of an enemy, sometimes doing critical damage. As you improve your skills, you will get better at doing V.A.T.S. and will be able to do cool things like save up critical hits for later, shooting weapons out of enemies hands, etc. A major difference to note for those familiar with Fallout is that V.A.T.S. no longer stops time, it just slows it down. This means you need to be quick on selecting and accepting your V.A.T.S. targets or enemies will get to you and hurt you before you get your attack off.

As I had hoped in my Fallout: Pip-Boy app review, you will find holotape games in the game to collect. These can later be played on your Pip-Boy app even when you aren’t playing Fallout 4. One of the terminals in Vault 111 contains Red Menace, Fallout‘s take on Donkey Kong. I’ve always sucked at Donkey Kong and you can see how badly I suck at Red Menace as well if you watch the Twitch video.

Speaking of the Pip-Boy app, you will definitely want to sync it with your game. You will get full access to all your Pip-Boy features on your smart device without having to pull it up in-game. One cool feature I found is that when looking at the Junk in your inventory, you can switch to Component View. This shows you which components (like circuitry or asbestos) are in which pieces of junk. I assume this will come in handy when I get to start crafting stuff. I imagine many Twitch videos of hours and hours of crafting! 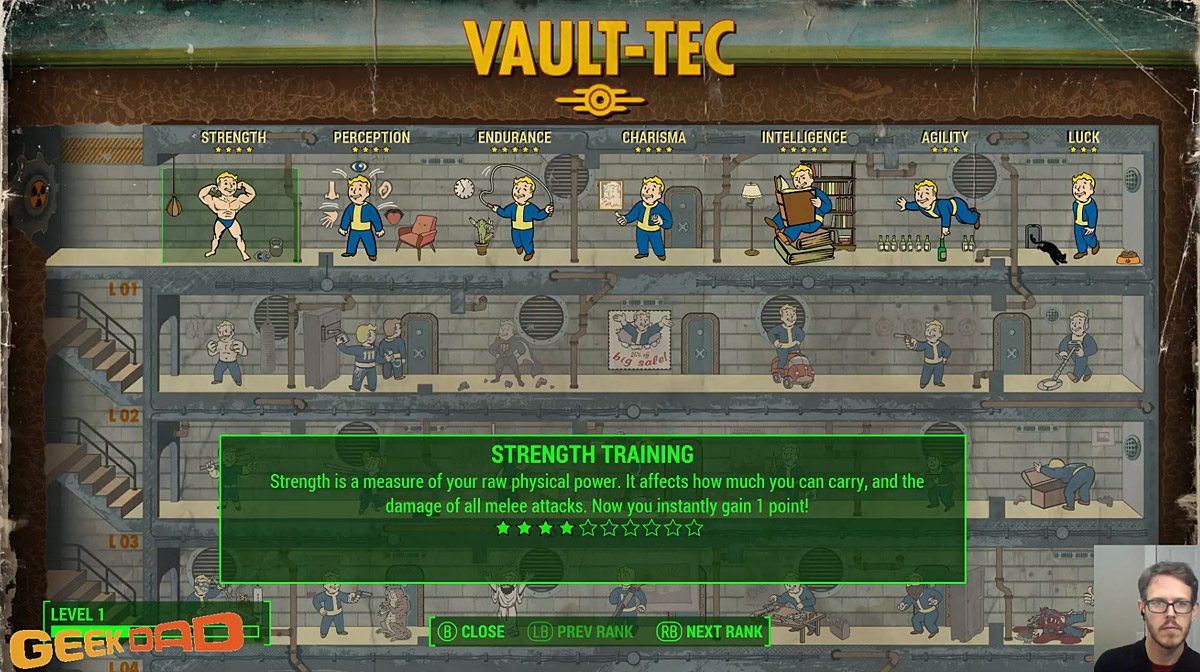 Once you get your hands on the Pip-Boy in-game, you can pull up the Perks chart. The chart is rendered as an animated poster, which makes it really easy (and fun) to see what perks are tied to which S.P.E.C.I.A.L. traits and what you need to unlock them. I can’t wait to start adding perks to my character. 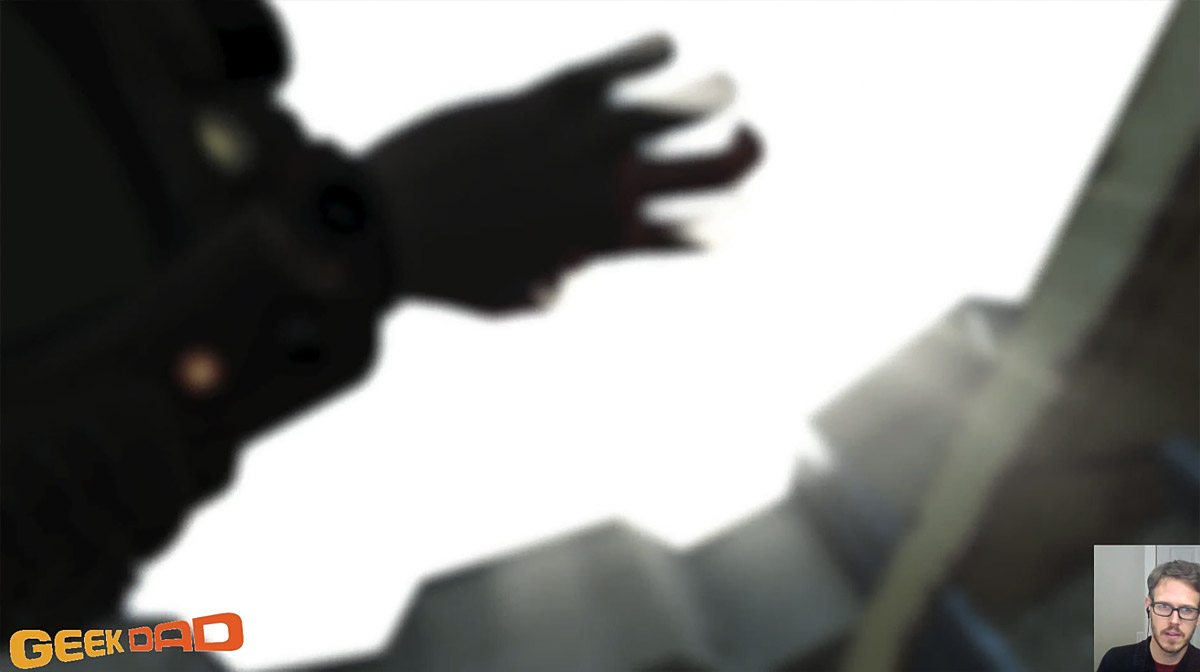 After an hour of making my character and exploring Vault 111, Claire finally headed out of the vault and into the light. I look forward to exploring the Fallout rendition of Boston and uncovering the mystery surrounding Claire and her family. Look for more Twitch streaming in the near future, and if you don’t already have Fallout 4, what are you waiting for?! 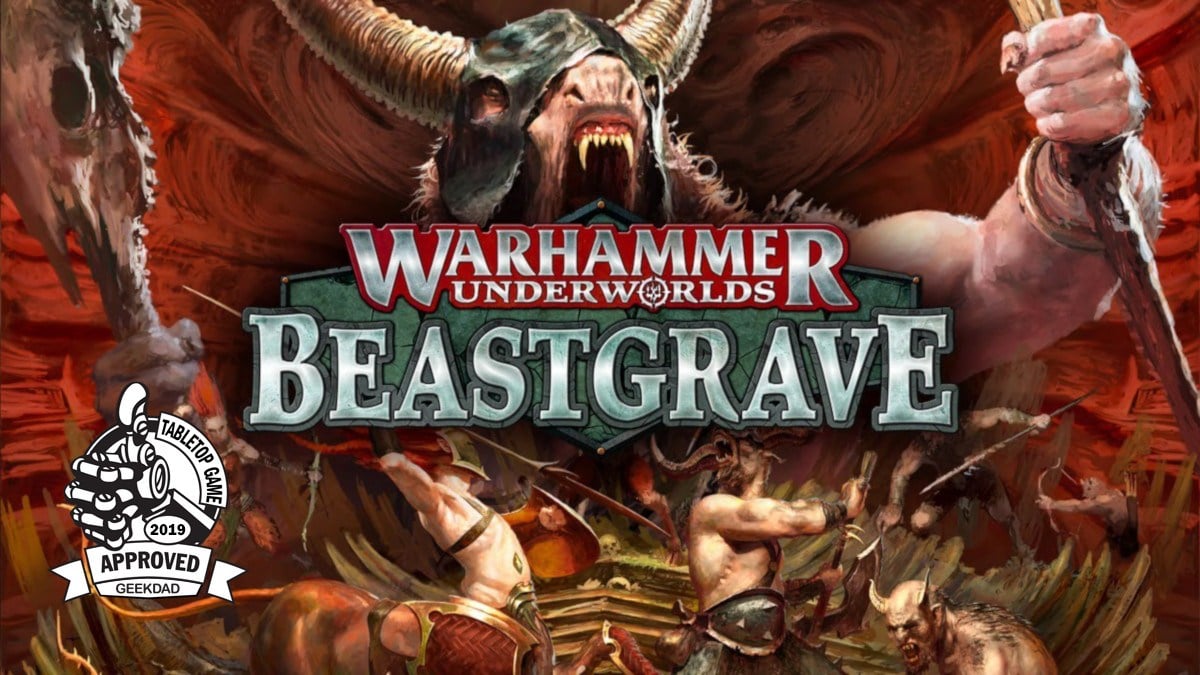 6 Reasons to Enter the ‘Beastgrave’ 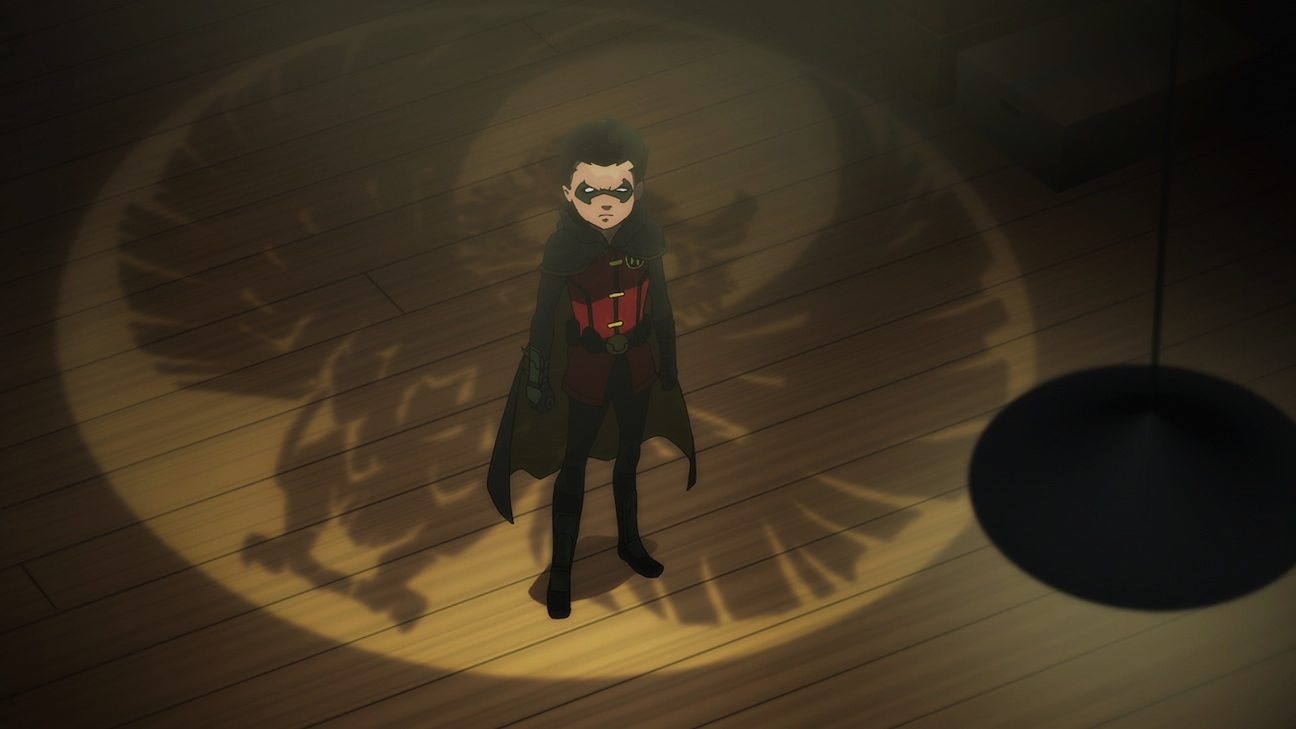 6 Things Parents Should Know About ‘Batman vs. Robin’