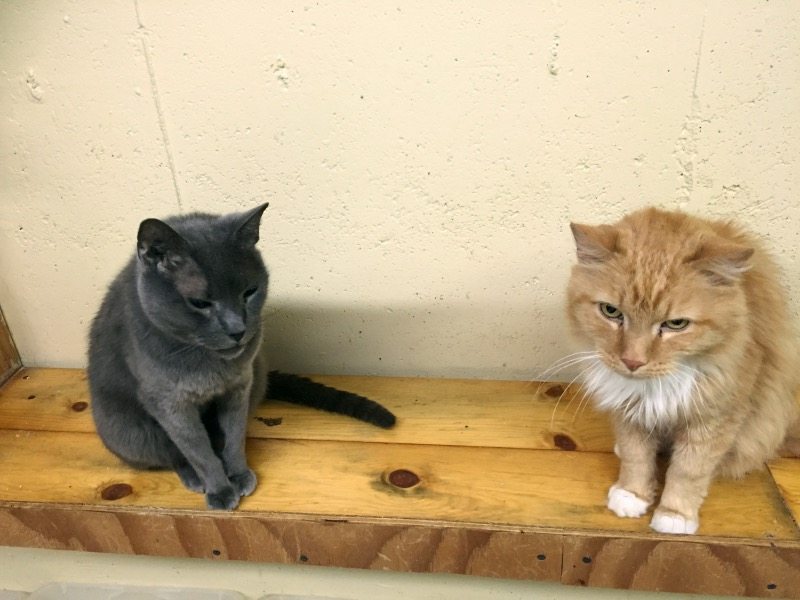 My daughter and I are cat people. We have four at home and every Wednesday we volunteer at our local cat shelter, Cat Tales. We spend up to ninety minutes feeding, grooming, and socializing the approximately 100 cats who live there, including the two in the image above.

On the right is Sundance who strongly resembles Captain Marvel’s flerken cat, Chewie, and on the left is Bruce, named after the Batman. The shelter is made up of four rooms, all with access to the fenced-in outdoors. In the last month more and more cats have come indoors due to the colder weather. But what about the cats who live outside the fences?

Aeris and I decided to build a cat shelter for feral or free roaming cats to take refuge in this winter. It’s what Catwoman would do.

As you can see in the picture, we repurposed a bin that had previously held Aeris’s extensive dinosaur collection (it’s outgrown this bin!). The foam cooler should fit snugly inside the plastic bin. This one came with a handle which I removed before placing it.

Cut a cat door in the bin.

The door should be about 6″ in diameter and several inches above the ground. I measured and used a Sharpie to outline where to cut.

Place foam cooler inside bin and cut out a corresponding door.

Again I used the Sharpie to outline the door so I didn’t have to cut it while inside the exterior bin. It’s most important for the doors to match–the cats can’t tell if it’s not a straight line!

Place straw or other insulation materials inside and around the foam bin.

Straw is best and it’s important to not use hay as it will not repel moisture. If you, like us, cannot find straw, you can use shredded newspaper and/or batting. Folded newspaper, blankets, towels, or other fabrics will retain moisture and should not be used. Aeris cut the newspaper into strips and the batting came from old pillows.

And there’s your cat shelter!