Today’s Word Nerd topic is one that’s become so ubiquitous that it even turns up among political pundits. Last month, Chuck Todd of Meet the Press suggested to Senator Bernie Sanders that they should do an interview in which they could “do the gambit of issues,” and the nation’s English teachers wept.

Gambit: a strategic maneuver in which one risks a small sacrifice in order to gain a greater advantage in the future; an opening move. Also the name of a member of Marvel’s X-Men.

Gamut: an entire range or scale, as of emotions, colors, music notes, etc. 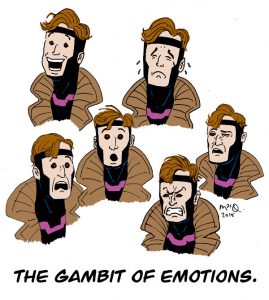 Gambit comes from chess, as a term describing a move in which a pawn is put in jeopardy in order to capture a more valuable piece. It comes from the Italian gambetto, meaning “to trip up,” from the Late Latin gamba, meaning leg. The term was first applied to chess in 1561 by Ruy Lopez, using the Spanish form gambito, which led to the French gambit, which influenced the English spelling. Gambit was first used in the broader sense of “opening move meant to gain advantage” in 1855, and as the name of the mutant superhero beginning in 1990.

Gamut comes from music notation, as a Medieval Latin contraction for Gamma Ut, the name of the lowest note of the scale, G, which in Latin is Gamma. In the Medieval scale, the notes were named for corresponding words in a Latin hymn to St. John the Baptist:  Ut queant laxis re sonare fibris. Mi ra gestorum fa muli tuorum, Sol ve polluti la bii reatum, Sancte Iohannes (“So that your servants may, with loosened voices, resound the wonders of your deeds, clean the guilt from our stained lips, O Saint John.”) Eventually, Do and Ti replaced Ut and Si in the modern scale. This musical scale is usually credited to Guido of Arezzo, a monk who is considered the father of musical notation; his work is dated to approximately 1025. Within about 400 years, his “gamma ut” term had evolved to refer to the entire musical scale and merged into a single word.

If you refer to “the gambit of colors,” you’re talking about using colors to mislead or trick someone.

If you refer to an “opening gamut,” you plan to start by doing everything at once.

Writing in the Margins of My Life: An Ode to Blogging

The FPS Is Dead: The Unfinished Swan Is a First-Person Painter