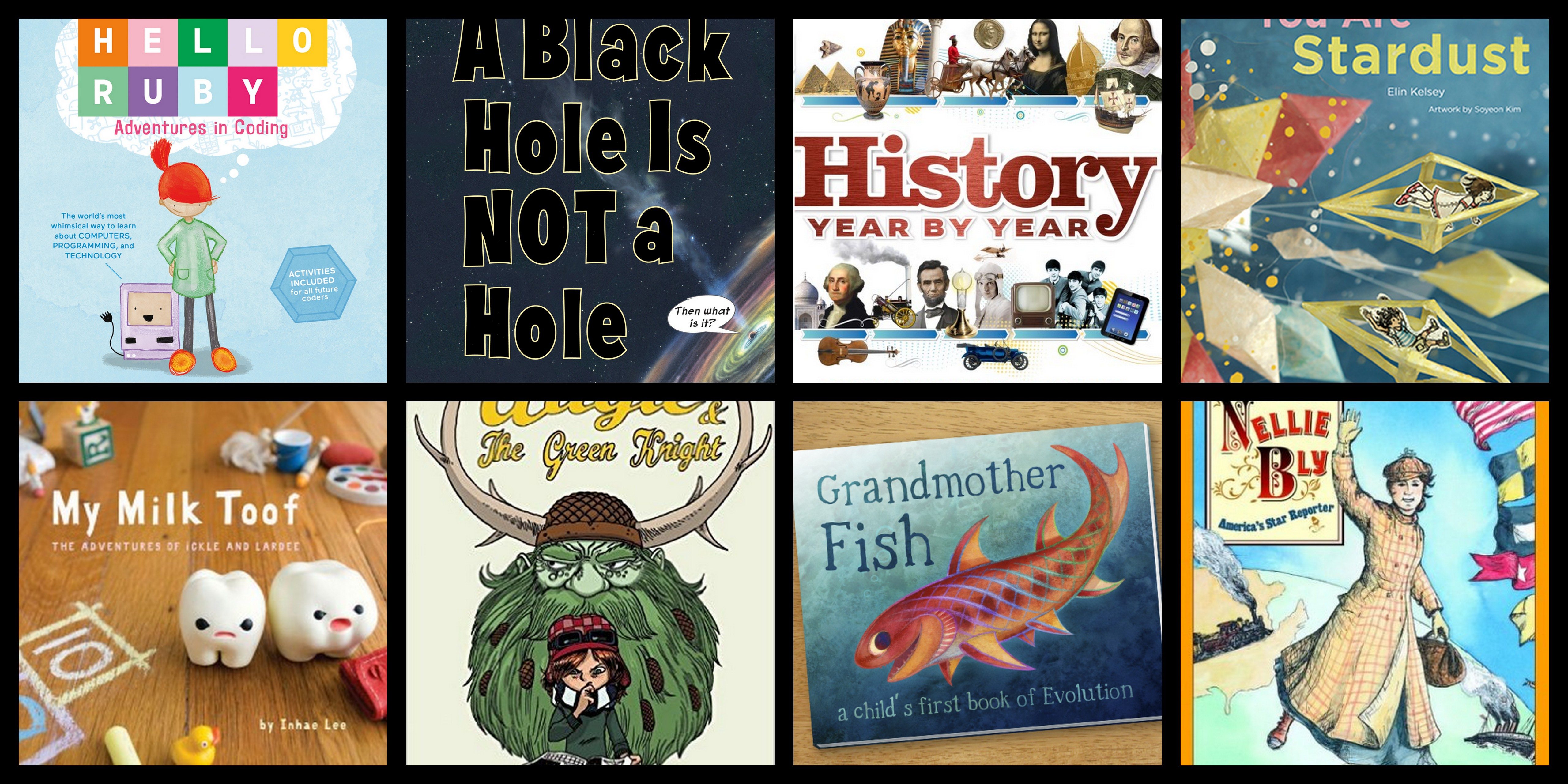 My 5-year-old and I haven’t shared our favorite picture books in a while for two reasons. First, we’ve ventured into the world of chapter books with Zach Weinersmith’s Augie and the Green Knight. The second is that we’ve been working our way through DK’s lengthy History Year by Year reference book produced by the Smithsonian Institution. More on those two at the end.

Nevertheless, I’m glad to finally have a few wonderful library finds, a few Kickstarter success stories, and some not-quite-picture-book books that cover the gamut of history, science, programming, and a little bit of humor.

I usually don’t list our favorites in any kind of order, but I have to put this one first this time because it was such a huge hit with my daughter. My Milk Toof: The Adventures of Ickle and Lardee by Inhae Lee is the story of what would happened if some of your baby teeth suddenly showed up at your doorstep years later. The images are photos of anthropomorphized clay teeth acting out various storylines. My 5-year-old and I could not stop laughing at the sight of the little teeth with their itty bitty accessories. The whole concept is beyond adorable. My Milk Toof started out as a blog—which I wasn’t familiar with until I found the book—so you can follow them there or borrow/buy the book to read at bedtime.

You Are Stardust, written by Elin Kelsey and illustrated by Soyeon Kim, explains how intertwined we are with nature—how our atoms came from stars, how the water we drink is the same that dinosaurs drank, etc. This is a simple picture book with very few words, as far as science picture books are concerned, but it still packs a lot of punch: We are part of nature, and nature is part of us. The art is a combination of real-life materials, sketches, and paint, and the results are fun images rich in depth, movement, and life.

Although this one isn’t technically a picture book (it clocks in at 80 pages and targets 9- to 12-year-olds), it is full of beautiful images on every spread that will entertain even younger children. A Black Hole is Not a Hole, written by Carolyn Cinami DeCristofano and illustrated by Michael Carroll, is a pretty long book about, well, black holes. You’d think the science of it would be way above what a 12-year-old can understand, let alone my 5-year-old, but the author does an absolutely fantastic job describing the science in a way that is understandable and engaging without dumbing things down. My 5-year-old was especially taken with the thought experiments described in the book. The author describes two thought experiments which we liked, one about what turning on a flashlight might look like if we could capture the light’s movement in a slow-motion movie, the second about a similar slow-motion movie that could capture light bending near a black hole (if the light were outside the event horizon, it would simply bend, if it crossed the event horizon then obviously it would keep getting closer to the center of the black hole so we’d never see it). I asked my daughter to recount what she learned from the thought experiments, and what she told me made me feel confident she really understood a fair bit of the book. She told me she learned “how light bends when it gets pulled by gravity” and that “the light is too fast for our eyes but in slow motion you can see it go around and around the black hole like a fish in a whirlpool.” Not bad for a 5-year-old reading about event horizons for the first time, and that’s a compliment for the book!

I picked up this book without noticing just how much text was hidden inside. The Daring Nellie Bly: America’s Star Reporter by Bonnie Christensen stuffs a lot of words in its 32 pages. I’m not usually one to shy away from hefty text, but something about this book looked a little long-winded. I pretty much pushed it off until we’d read everything else in our library stack. Finally we gave it a try. I even prefaced it with “let’s just read a couple of pages and if it’s boring we can move on to something else.” However, we were both enthralled. I knew Nellie Bly as the reporter who faked insanity to get herself placed in an asylum and report on their horrible living conditions, yet somehow I had never heard of her trip around the world to beat the fictional 80-day record from Jules Verne’s novel. This picture book, in fact, spends very little time talking about the asylum exposé and much more about Nellie’s trip around the world, which proved to grab our attention from beginning to end.

Hello Ruby by Linda Liukas is half picture book and half activity book rolled into one adorable package. What I love about it is that it introduces programming without requiring a computer at all. The point of the book isn’t to teach you a programming language, but programming concepts. The story part of the book doesn’t focus on teaching what binary is, or what algorithms are, at least not explicitly. Instead it focuses on a girl trying to break a large, complex problem into small, simple problems that are much easier to solve. That is programming at its core. The activity part of the book does introduce some of the traditional lingo—Booleans, data structures, loops—not with a definition but with an exercise that demonstrates how it works. For example, on the exercise about loops, it says, “Ruby and her friends like to dance. They all have their signature moves. Repeat after them! How many times can you do the dance routine?” Ha ha, routine, get it? Note: Hello Ruby comes out on October 6th.

Grandmother Fish, written by Jonathan Tweet and illustrated by Karen Lewis, is self-labeled as a “child’s first book about evolution.” It is such a fantastic book! It is very readable for preschoolers and yet manages to introduce this complex concept in a simple way. It starts with a fish, a “grandmother fish” with a specific set of abilities, then talks about its grandchildren who possess the same abilities plus a few more. This repeats through the evolution from fish to reptile to mammal, finally finding its way to humans in the end. Fun, simple, and totally perfect. You can either download a free PDF copy or pre-order a hardcopy.

As for the chapter book—it doesn’t fit in the category of picture books but I’ll include it anyway—we loved Augie and the Green Knight by Zach Weinersmith, which I had backed on Kickstarter. Okay, well, I loved it. My 5-year-old, however, was seriously longing for more pictures. Nevertheless, we powered through it with more success than with our last attempt (Pippi Longstocking). Meanwhile we bought the kids a pet beta fish and my daughter wanted to name it Augie, after the book. I’ll call that a success. Augie and the Green Knight is now available for purchase for non-backers.

For all of my 5-year-old’s faults—she’s what you’d call “spirited”—she will let us read her anything with pictures. Anything. We read DK’s Human Body: A Visual Encyclopedia cover to cover twice—her choice, not mine—and when I realized she was ready for me to read all 256 pages a third time, I decided to give History Year by Year a try instead. As it turns out, history is really violent! Shocker, I know. It’s one of those things you know but don’t really fully realize until you present it to a 5-year-old. Here’s a clue: The Spartans didn’t raise such a powerful army by being super gentle with their youth. But there’s a message in there somewhere: Our ancestors have often been violent, closed-minded, and short-sighted, which is why each generation needs to aim to be better than the last if we hope to survive. Also: Intelligence was clearly a lethal mutation, but I digress.

How about you, have you read some interested kidlit recently? 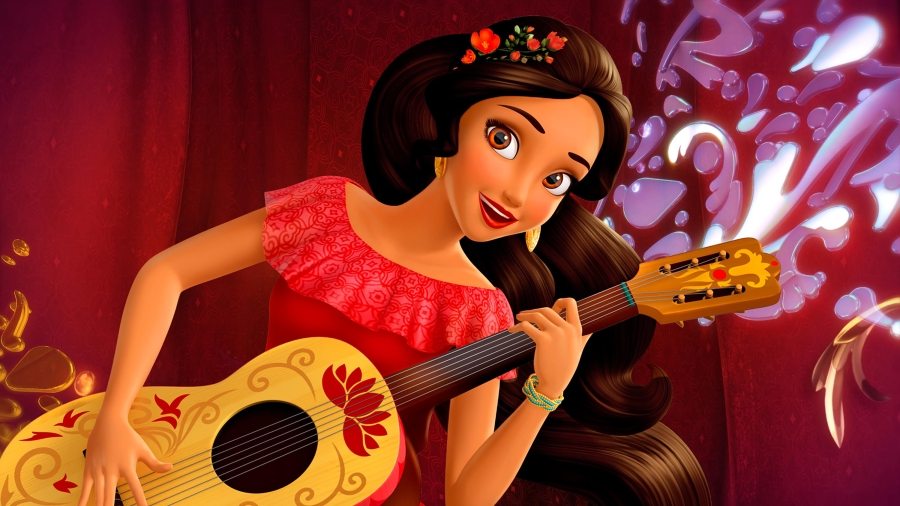