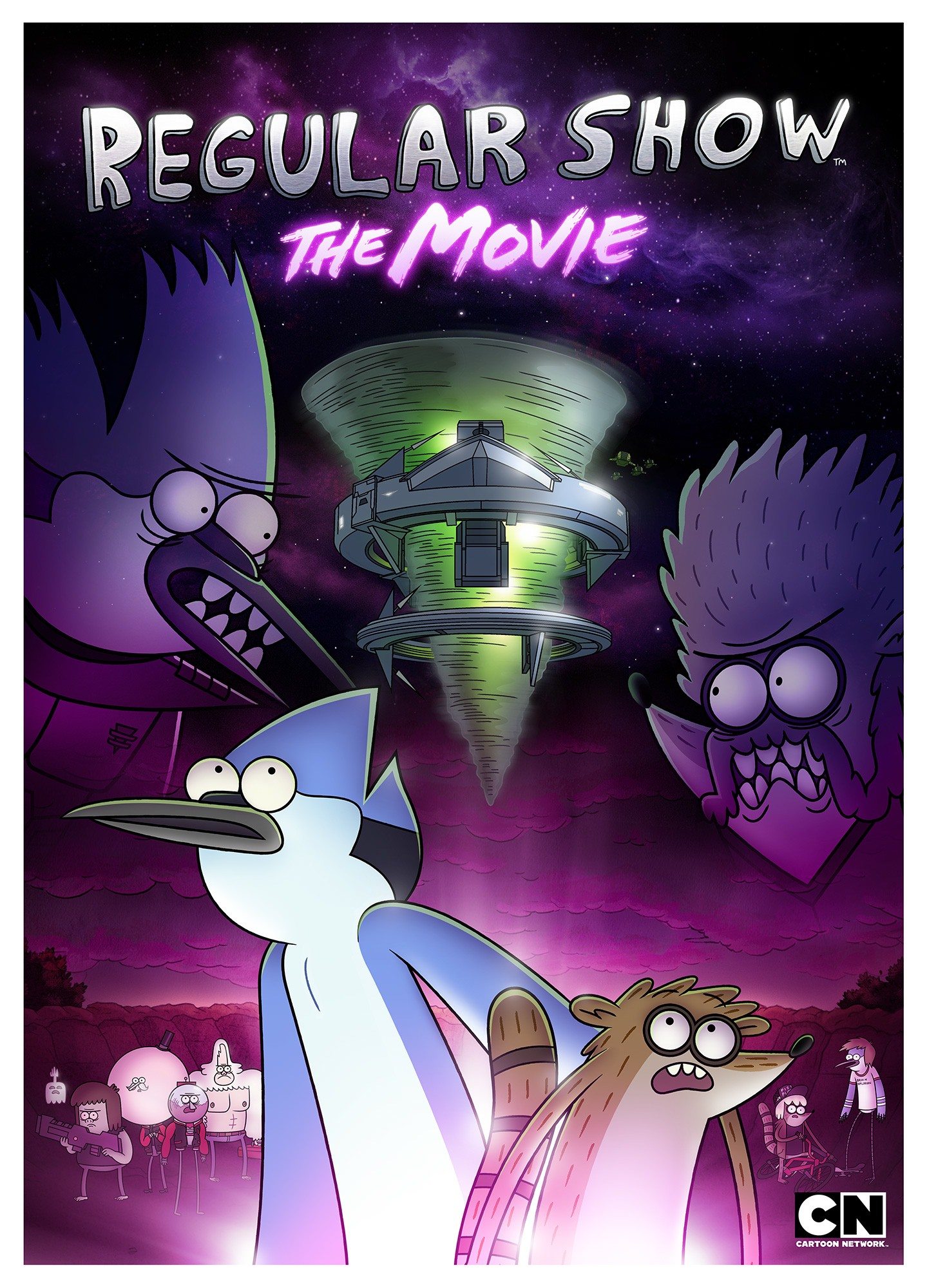 Next week Turner Entertainment and Cartoon Network will be doing something unprecedented: it will release a full-length feature film for digital download ahead of a DVD release…and even further ahead of the film playing on Cartoon Network itself.

Our family had the chance to watch a preview of the movie, which will be available online starting September 1st. Regular Show: The Movie, is a 70-minute film featuring Mordecai the blue jay (J. G. Quintel) and Rigby the raccoon (William Salyers) in an elaborate time travel story. True Regular Show fans will remember a Season 5 (2013) episode, titled “A Skips in Time” about the gang traveling through a time-traveling tornado (known as a “Timenado”) to meet Skips (Mark Hamill) as a much-younger version of himself, named Walks.

Will Cartoon Network make any money doing this? Will kids beg their parents to make the small investment so they can watch this movie in September…before their friends do in November?

And how will viewership of the network television premiere be impacted if their true fans perhaps saw the movie already via download or DVD? Perhaps Cartoon Network is trying to tap into the “binge watching“/”I want it NOW” generation of television fans.

The Timenado returns for Regular Show: The Movie, and this time viewers will learn the Timenado’s back story. The story starts a few years in the future with the gang (Mordecai, Rigby, Pops, Benson, Muscle Man, Skips, and Hi-Five Ghost) trying to go back into time to the “present” (which you can assume is 2015).

A ship crashes and the future gang tells the present gang that they have to travel further back to convince high school versions of Mordecai and Rigby to not create the Timenado that in the future is on the verge of destroying the world. The gang’s high school volleyball coach was attempting to use the Timenado to destroy Rigby as part of a grand revenge scheme.

Did that make sense? Probably not. You’ll have to watch the film to see if the gang’s clever (albeit trite) time travel tricks will help save the world. In the meantime, here’s the official trailer:

A Time Travel Movie, But What Kind?

My 12- and 10-year-old sons, our household’s true Regular Show fans, enjoyed watching the movie, but I was turning colors the whole time trying to wrap my head around the plot. There are numerous pop culture references (such as a replica scene of the “Ferris Bueller needs to beat his parents home from work” scene complete with the music) which are clever, but the crux of the story is basically a rip off of a combination of Back to the Future (there are elements of both the first and second films) and Bill & Ted’s Excellent Adventure, two of my favorite time travel movie franchises.

My sons have seen the entire Back to the Future trilogy numerous times, and even they were seeing the parallels while Mordecai and Rigby were back in their high schools watching younger versions of themselves getting picked on. The story arc about someone from the future coming back to warn present-day self to do something to change the future is straight out of Bill & Ted. There is even a copycat of the classic scene where Bill and Ted quickly go back in time to put keys in a certain location outside the police station for present-day Bill and Ted to steal.

Watching this movie led our family to have a “time travel in movies” discussion. From The Terminator to Back to the Future to Harry Potter and the Prisoner of Azkaban to the 2009 J.J. Abrams Star Trek to even Mr. Peabody & Sherman, I’ve enjoyed seeing my sons try to think through the time travel paradoxes that show up in various ways in film. With Regular Show: The Movie, we were trying to figure out which of the numerous time travel movies we’d seen best fits the bill.

I personally felt the most time travel parallels in the Regular Show movie with Bill & Ted, yet it’s the one [age appropriate] time travel movie that I’ve yet to share with my sons. I haven’t delayed for any particular reason, we just hadn’t gotten around to it yet <adding the movie to our Netflix watch list>.

Perhaps the point of the copycat scenes was to inspire the parents to show their kids Back to the Future and Bill & Ted…if that’s the case, it certainly is working with us.

Is Regular Show: The Movie Worth Downloading Now?

The model that Cartoon Network is choosing to release this film is a staggered format. I hadn’t heard of films being released in this order before.

The digital download will be available through iTunes, Amazon, and Google Play on September 1st for $7.99 for SD and $9.99 for HD. A DVD version will then be released on October 13th at an MSRP of $14.98. Finally, the movie will be airing on Cartoon Network sometime in November, which of course will be complete with commercials. The official date is “TBA”, although Wikipedia is suggesting it will air on November 25th.

I’ve spent some time pondering how this order of movie release might actually work. I’m accustomed to the movie showing on network television first, then becoming available for purchase through other outlets afterwards. Phineas and Ferb: Across the Second Dimension seemed to fulfill this model perfectly well.

In my humble opinion, I don’t think this movie is worth ~$10 for the up-front download. Should you watch it? If you’re as big a Regular Show fan as my sons are, then yes…absolutely! But exercise some patience: the movie will be out by the end of November on network television, and it’s not mind-blowing enough to be worth investing in seeing it any sooner.

Wait to see it on network television. If you enjoy it enough, then go ahead and make the investment.

Oh, and one more thing: Regular Show: The Movie? Why not just call it Regular Movie? Or are they being ironic?

GeekMom received a download code for this movie for review purposes.