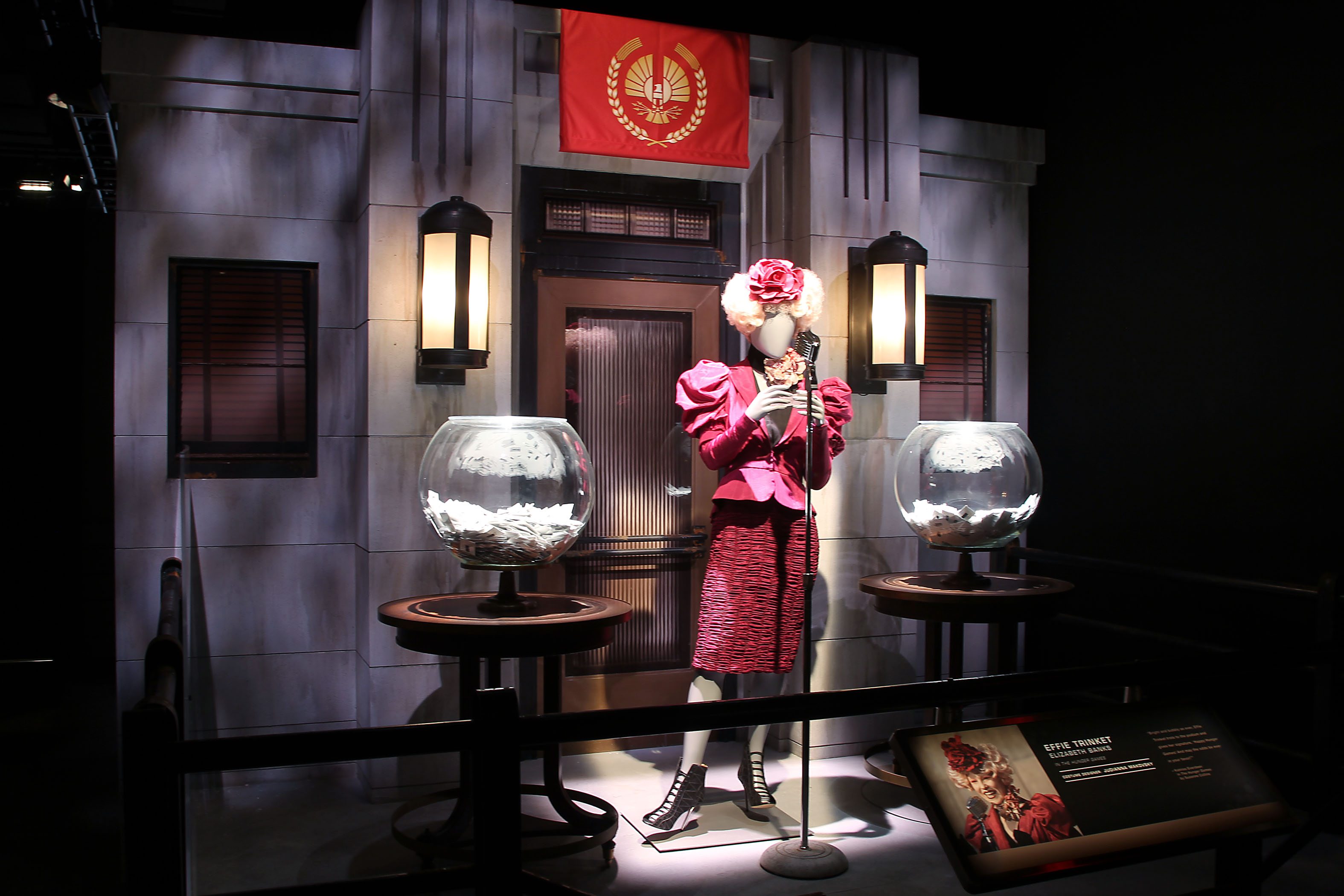 I approached my visit to the DiscoveryTimes Square Museum with trepidation, worried that the new Hunger Games exhibition would be just “hey, look at the cool stuff from the movies.” There’s nothing wrong with that approach for some movies but the Hunger Games concerns a dystopian future where teenagers are forced to kill each other for amusement.

It’s not a subject for glorification.

No worries. Instead, the exhibition uses the books and movies as a chance to talk about the influence of propaganda on war, income equality, and even how visitors might fight back against an oppressive regime. It begins in a staging area, as visitors are welcomed to the world of the Hunger Games by Effie herself or a reasonable holographic facsimile.

The show walks the visitor through much the same path as Katniss: from her home in District 12 to her train ride to the Capital, to the control room of the Games itself, to the set of the television show in which each tribute is forced to make a plea for their lives (the chairs are very uncomfortable), and finally to the regimented barracks of District 13.

Interspersed with these are details of what inspired author Suzanne Collins to create the world of the Hunger Games. The District 12 piece details how the poverty affected its citizens, and how citizens suffer under the oppressive capital. Katniss’ hunting clothes are here and it’s clear that great care was taken to provide her with scuffed up boots to reflect her situation.

Book lovers will also find references to plot elements that were left out of the movies as well, like the people arrested when they tried to flee the boundaries of District 12. I stared at the map of Panem for quite some time.

The train gives visitors a chance to sit in essentially the same place as Katniss, Peeta, Haymitch and Effie, with the first dinner set on the train, complete with the knife Katniss jammed into the table.

However, while the movies can be violent, there’s no gore to scare younger kids. Instead, it focuses on the moral issues those living inside a dictatorship must confront, including providing several choices in which you decide how to rebel. (Charity was getting the most vote when I passed through.)

It’s interactive enough to interest children as young as age eight, with a chance to use the Game Master’s table, the train, an exercise in tying knots like Finnick, and, the most popular, a virtual walk-through of the fighting styles used in the movies.

All through the exhibition, appropriate clips from the movies are played, and bits from the soundtrack are piped in. Examining the clothes and the sets gave me a new appreciation for the work of costume designer Trish Summerville. The clothes themselves can be used as a jumping off point for a discussion with children about where their clothes come from and how they’re made.

There is, of course, a gift shop at the end. I wandered through it and noted that there are action figures of Katniss and Effie available, a change from the Avengers store, also at the museum, which went out of its way to exclude Black Widow from all clothing, including those made specifically for women. (Hawkeye rated a shirt. Not Natasha.)

Tickets for the Hunger Games Exhibition are $29.50 for adults, $27.50 for seniors (65+), $22.50 for children ages 3-11, Naturally, there are extras available. The on-site Mobile Guide Rental is $7. Photos against a green screen so as to appear in the world of Panem are extra, as well as a video that depicts visitors riding on chariots at the capital.

That’s all pricey but there is one at-home alternative: The Hunger Games: The Exhibition app, for $3.99. It’s also worth buying if you’re going, as it replaces the $7 on-site rental.

Disclaimer: GeekDad received a press pass to the exhibition.

A Cure For w00tstock Envy

Shh, It’s Robot Season! Find a Robot Competition Near You