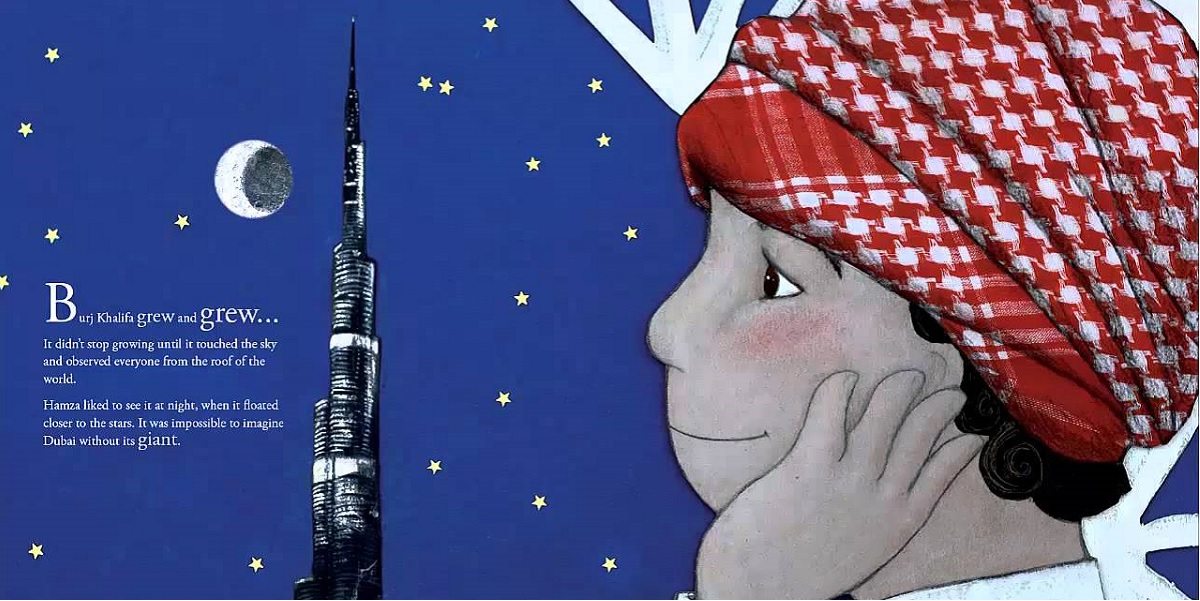 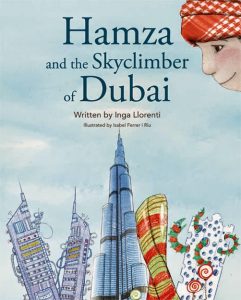 The awesome book Hamza and the Skyclimber of Dubai was released this year in the Emirates Airline Festival of Literature in Dubai. It follows the adventures of Hamza and Samir, two eight year old boys who are in love with their city skyscrapers.

Dubai is very famous for them: the world’s tallest building is there, and so are many other fabulous new buildings. Hamza’s favorite is Burj Khalifa, Samir’s is Cayan Towe. They love to draw them and have formed an explorer’s society: “The society of Awesome Skyscrapers,” where they and their friends set out to scout and draw the towers with creative additions of their own: Dubai Business Bay Q-14 Tower, for instance, resembles a giant cheese; Damac Park Towers look just like crabs; and all the book’s illustrations show just how imaginative these kids are.

When Hamza was a boy, watching his favorite tower being built, he imagined that it was not a building but a space rocket, destined to reach the moon. His quest to conquer the sky remains one of his biggest fantasies, so when he meets Samir’s older brother, he is elated: Faris is a sky climber; he is in charge of leaning over the edge of the skyscrapers to clean the windows from the outside, a very dangerous job.

One night, he invites the boys over for a visit inside Burj Khalifa. As the elevator begins to soar, Hamza realizes his dream can become true: up there, at the top of the tallest skyscraper of the entire world; the moon is closer to him than ever before.

I really enjoyed this book, especially for the great initiative these kids show: they draw and notice the wonderful buildings near them (this book will be a cool gift for any future architect), they are volunteers as bird nurses in Dubai Falcon Hospital, and they also love to rescue turtles in Jumeira Beach.

Obviously the book’s design emphasizes the interesting landmarks and tourist spots of the city, but the story is sufficiently well-developed and stands for itself. When Hamza finally reaches the top of the tower, you are genuinely glad for him.

Inga Llorenti is a Bolivian author who now lives in Dubai, and Isabel Ferrer I Riu is a Spanish illustrator who resides in Barcelona. The book is not yet available on Amazon, but undoubtedly it will be; anyone with an interest in new buildings will want to share this with their kids.

The only observation I’ve got is that there is not a single female character in the book; all the protagonists are male. This is not necessarily bad, but I would love the sight of a girl creating awesome skyscrapers in the future.

You can visit the book’s blog to see more illustrations.

(Disclosure: I was sent a review copy of this book).
Hamza and the Skyclimber of Dubai
Written by Inga Llorenti
Illustrated by Isabel Ferrer I Riu
Emirates Printing Press
United Arab Emirates, 2015
ISBN: 978-9948-18-049-4 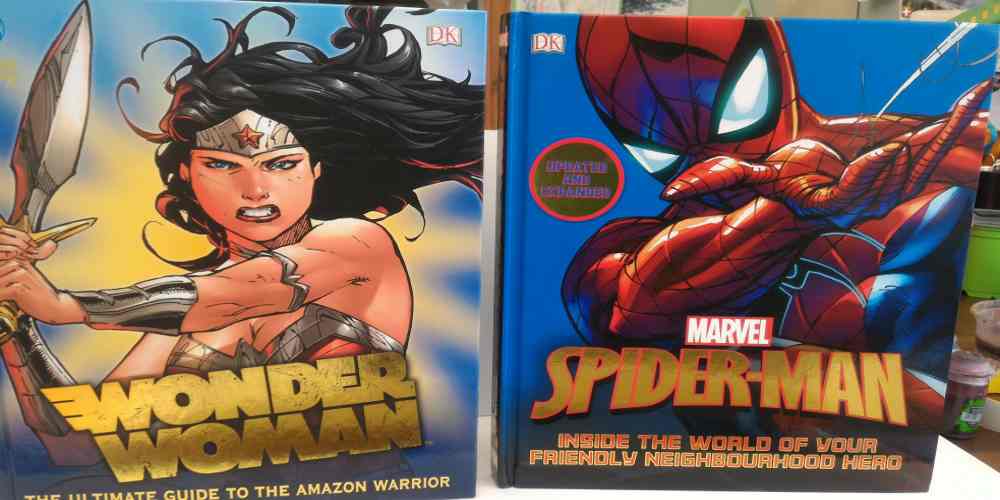