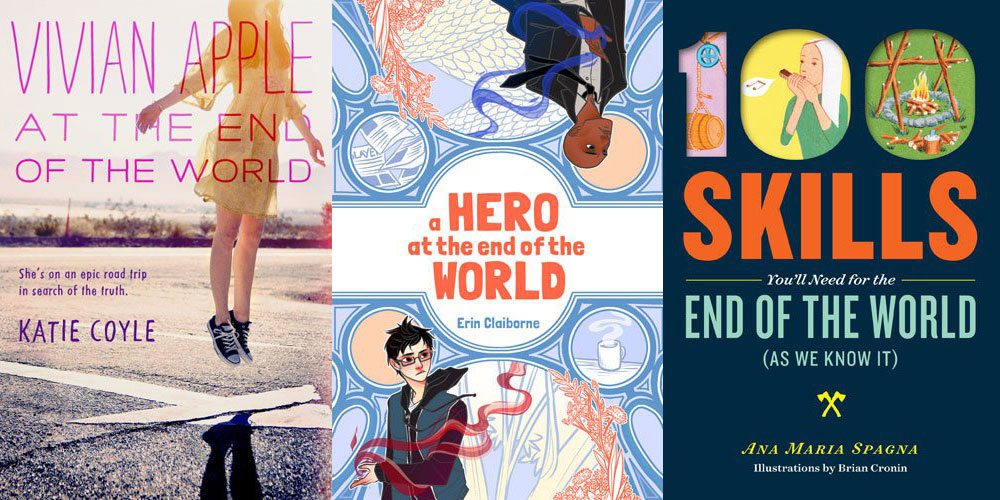 Sometimes you just gotta skip to the end–the end of the world, that is. All of the books in today’s Stack Overflow are about The End. We’ve got religious end-times, magical end-times, and some skills you might need once you get there. 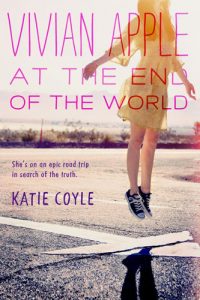 Vivian Apple at the End of the World by Katie Coyle

You’ve probably heard of the Left Behind series, even if you’ve never read any–the series began twenty years ago and had 16 books in the series, plus another 40 titles in the YA spin-offs, and a few movies (including Nicholas Cage’s reboot last year). It begins with the Rapture, when all true believers are taken up into heaven, and the rest of the world deals with the resulting chaos. Vivian Apple at the End of the World starts with a similar premise, though in a slightly different version of our world. The Church of America, led by the charismatic Beaton Frick, has risen to power in the past few years and controls nearly everything. Frick has predicted the Rapture, and Believers everywhere are waiting, including Vivian Apple’s parents. Vivian is just waiting for the moment to pass so life can go back to normal.

Then she comes home from a “Rapture’s Eve” party to find her parents missing. Not all Believers vanished, but a lot did, and the rest of the world is looking for answers. Vivian and her friend Harp take off and journey across the drastically changed country, and what they find at the end of the trip is not at all what they expected.

This story has it all: a big mystery, a wild road trip, first love, crazy mobs, even a sledgehammer. You get some hints early on that there’s something not quite right about the Rapture, but author Katie Coyle doesn’t tip her hand too much until the end. I do hold some skepticism at the amount of control the Church of America had gained in such a short time, but overall it was a pretty good read. The sequel is expected in September, so we can find out what happens to Vivian next. 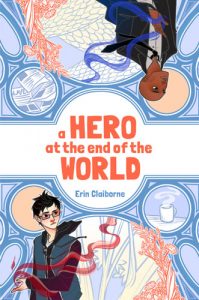 A Hero at the End of the World by Erin Claiborne

Okay, so even though this book has “End of the World” right there in the title, it’s not exactly a typical end-of-the-world book. It’s more like the world of Harry Potter, but for adults (or at least young adults), with a heavy dollop of cynicism. I came across it at the library and was intrigued by the title, so I gave it a shot.

Ewan Mao was destined to slay Duff Slan, the evil tyrant who ruled over Britain. But when the moment comes (in the Prologue), his friend Oliver Abrams does the job instead. Ewan finds himself completely at a loss–his whole life had been leading up to this point, and it didn’t happen. Five years later, he’s stuck working in a coffee shop and living with his parents, and Oliver is living the life Ewan had imagined would be his, in the Serious Magical Crimes Agency. The premise reminds me of a couple of other books that also play on the “chosen one” idea: Crap Kingdom and The Return of King Doug both come to mind.

Events conspire to bring these two former friends back together: Oliver finds himself investigating a powerful cult that may have the ability to destroy the world. And Ewan? Well, he has unwittingly joined this cult.

The book is funny, even while digging somewhat seriously into the topic of failed expectations, and I had a good time reading it. 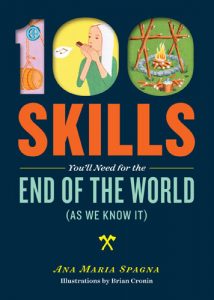 If the world ends, you might not really care about how it happened, but you’ll want to know what you’ll need to survive. Spagna has compiled a list of 100 skills that will be handy to have in a brave new world, from Animal Husbandry to Whittling. Each one is a short page describing the skill accompanied by an illustration by Brian Cronin. The illustrations are more evocative than instructive–meant to represent the skill in some way.

I was a little disappointed that the book does not, for the most part, teach you these skills–it’s more like a list with reasons why each skill will be handy. Some of the skills do have a few more details or an extra page spread, but the book is better off as a checklist or springboard into more research about the skills you need to hone. Probably if you want a more detailed how-to book, you’ll want to read The Knowledge: How to Rebuild Our World From Scratch by Lewis Dartnell (reviewed here by Jim Kelly). 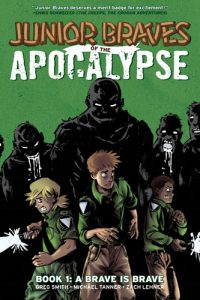 A patrol of Junior Braves goes on a week-long camping trip in the wilderness of Washington State, and return home to find everything changed. All the parents are gone, abandoned vehicles are everywhere, and… oh, did I mention the creepy groaning people wandering the streets?

This group of boys (plus their assistant troop leader) has to figure out how to survive, using the skills they’ve learned as Junior Braves. And it’s not just the zombies they have to watch for–the other adults they encounter are more interested in helping themselves than the kids.

It’s a young adult comic book–there’s a good bit of violence and some language, but it’s generally not too graphic. It is very much a book about guys–none of the main characters are girls or women, and you only encounter a couple of women after the initial scene when the parents send the kids off to camp. While there are funny parts, the book is mostly serious adventure-horror and not comedy.

I did enjoy this first volume–it’s a fun way to mash up scouting survival skills with an end-of-the-world scenario, and I do like that the various kids each have their own personalities and skills to contribute to the group. Junior Braves of the Apocalypse will be published in July.

And now you’ve come to the end of this article… but don’t worry! I’ve got several more titles about the end of the world on my reading list, so I’ll tell you about those in another Stack Overflow soon. (Assuming the world doesn’t end before then.)

Disclosure: Except where noted, I received advance reader copies or review copies of these books. 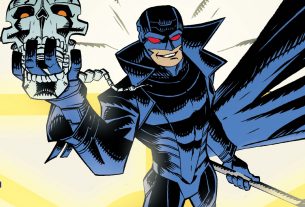