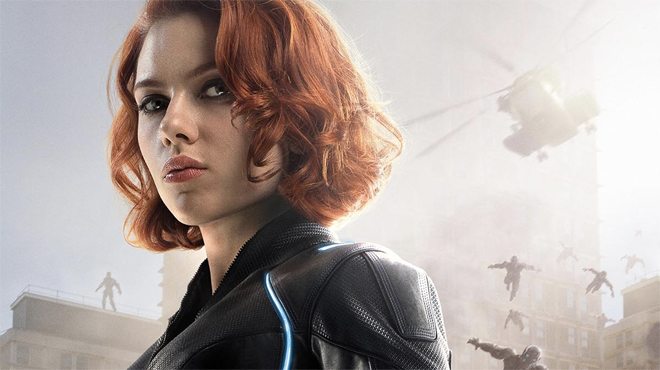 The calendar may say it’s spring, but the summer movie season is officially upon us with the release of the sequel to 2012’s blockbuster The Avengers this weekend. It’s Marvel, it’s Joss Whedon, and it’s the Avengers, so there’s no question Avengers: Age of Ultron is going to be a megahit to rival, perhaps even surpass, its predecessor.

A traditional review seems rather pointless for a film like this. I mean, if you want to see it you’re going to see it, no matter what the critics say (for the record, I say it’s a whole lot of fun and well worth your time). What’s more valuable, I think, is an exploration of the issues the film raises, particularly in terms of the depiction of its main female hero, Black Widow (deftly portrayed by Scarlett Johansson).

Due to some grossly insensitive comments made by a couple of the actors in an interview (et tu, Evans?) and the observation that Black Widow has been woefully underrepresented when it comes to merchandise, the character has become a lightning rod for controversy on the fringes of the Avengers franchise. And let’s not forget that despite Johansson’s popularity and the rich well of story material, there’s still no sign of a Black Widow standalone film.

These are all legitimate gripes, important to the ongoing conversation about the treatment (or, sadly more often, mistreatment) of women in Hollywood. Yet it always seems as though there are those lying in wait for things like this to happen, ready to fire up the outrage machine and whipping out hashtags like pre-printed Super Bowl championship T-shirts. There’s a old newspaper saying: “Never pick a fight with anyone who buys ink by the barrel.” The updated version is: “Never offend anyone who sells ad space by the page click.” To be fair, it doesn’t help that tone-deaf filmmakers, actors, and studios fall into the trap every single time.

So now, instead of talking about Black Widow’s arc in Age of Ultron, we’re drawn into a larger debate about slut shaming and invisible protagonists on retail shelves. There are plenty of places where you can engage in that worthy discussion, but I’m not going to get into all of that here (others have covered the topic quite thoroughly). What I’d rather focus on is Natasha’s storyline in the film itself, an aspect often overlooked in the midst of all these external elements.

This is where I must to pause to issue a spoiler warning before continuing. The following article will deal with some minor plot points from the film. I won’t be revealing any major details about the final act or any of the other character’s storylines (except where they directly intersect with Black Widow), but if you want to go in truly knowing nothing you may want to stop here and come back after you’ve seen the film. Otherwise, let’s dive right in.

Setting aside for the moment her appearances in previous MCU installments, I would argue that the storyline Whedon has written for Black Widow in Age of Ultron is actually quite empowering. The sweeping action sequence in the film’s opening shows her fighting shoulder to shoulder with her male counterparts. They value her for her skills and what she can contribute to the team. No one talks down to her, flirts with her, or considers her lesser because of her gender. She’s the only one who points out the difference, often jokingly referring to her compatriots as “boys.”

In a way, Natasha Romanoff is the spiritual successor to Peggy Carter, achieving the equality and respect among her colleagues that Peggy could only dream about in the 1940s. I believe in giving credit where it’s due, and Whedon has made Black Widow an intrinsic part of the Avengers, consumer products not withstanding.

It’s Natasha herself who goes and challenges that dynamic by not only having romantic feelings for Bruce Banner (Mark Ruffalo), but expressing them to him outright. She takes the initiative, making it clear to him that she’s still considering whether to go for it, and if she does it will be on her terms. It’s sort of adorable the way Bruce has no idea what to do with this declaration. He’s obviously interested (even the “other guy” has a soft spot for her), but has convinced himself he’s damaged goods. What he doesn’t realize is that’s exactly what she sees in him. She’s damaged too, and looking for someone who won’t judge her for it.

I’ve heard some critics take issue with the fact that Black Widow in Age of Ultron is basically defined by her relationship to a man, as if somehow that diminishes her as a character in comparison to her male counterparts. I don’t agree with either part of that assessment, but let’s say for the sake of argument that the first part is valid and her journey in the film is centered around her connection with Bruce. If that’s true of Natasha, then it’s true of Bruce too, since they are on a parallel path. Their story is about trying to find some shred of good in a whole lot of bad. The question that unites them is whether they are too far gone for redemption. Love is one measure of redemption, but it’s not Natasha’s only option.

Don’t get me wrong, I’m not saying the film should be held up as beacon of feminism or anything. Though it features a handful of outstanding female characters, they scarcely interact.

I especially wanted to see more of the strong friendship hinted at between Natasha and another female character outside of the world of the Avengers, but their screen time together is minimal. Certainly there’s room for improvement on the Bechdel front. What I’m arguing is that Black Widow is far from marginalized in the source material, even if she gets the shaft everywhere else.

Age of Ultron is a very crowded film, with lots of moving parts. That Whedon was able to serve so many characters, even in a minimal way, and still keep the running time under three hours is an impressive feat of storytelling.

I encourage Black Widow fans to see the film themselves and form their own opinion, outside of the Internet echo chamber. You may come to a completely different conclusion, and that’s fine. That’s great. That’s a discussion I’d love to have.

2 thoughts on “Let’s Talk About Black Widow in ‘Avengers: Age of Ultron’”