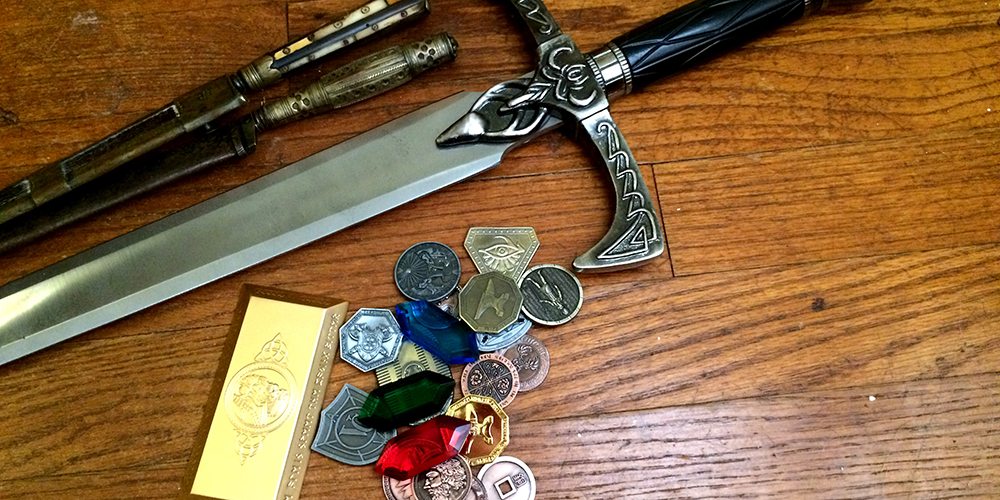 When I was a kid, we loved playing Dungeons & Dragons in my parents’ basement. But sometimes the mood struck and we’d grab our weapons from the wooden arsenal my dad made for us and… well… we’d LARP. There’s no other way to put it. We didn’t know it at the time, but we were participating in live action role-playing. And it was a blast.

But instead of gold coins inside massive treasure chests, we had to rely on plastic poker chips. Our imaginations were strong and we powered through, but any time one of us would get ahold of some foreign money, it went right into the game. If we’d had the Fantasy Coin, LLC mint back then, though, we’d be all set. Check out this stuff.

These folks are running a crowdfunding campaign on Kickstarter and for $14, you can get a set of 30 coins or 7 gems shipped to your door.

I received a small fortune in fake treasure from the creators. Dwarven coins emblazoned with anvils and the stoic bearded faces of kings-beneath-mountains. Egyptian specie adorned with Osiris and pyramids. Multicolored hexagonal gems reminiscent of Hyrulean rupees. Every single piece is highly detailed and has the heft of real coinage.

Say you’re role-playing a crime boss in your D&D game. There’s an immense satisfaction in sliding a golden trade bar across the table or impatiently tapping it with a thick golden coin that you can’t mimic with mundane pocket change.

They even have coins that mimic the shape of the money in one of my favorite board games, Lords of Waterdeep.

And if you don’t partake in either of those pastimes, you could always give one of the Cthulhu coins to your kids and tell them you got it while you were on expedition to Antarctica.

Check out the Fantasy Coins and Bars Kickstarter campaign.

I received a free sample of coins, bars, and gems from Fantasy Coin, LLC for this review.