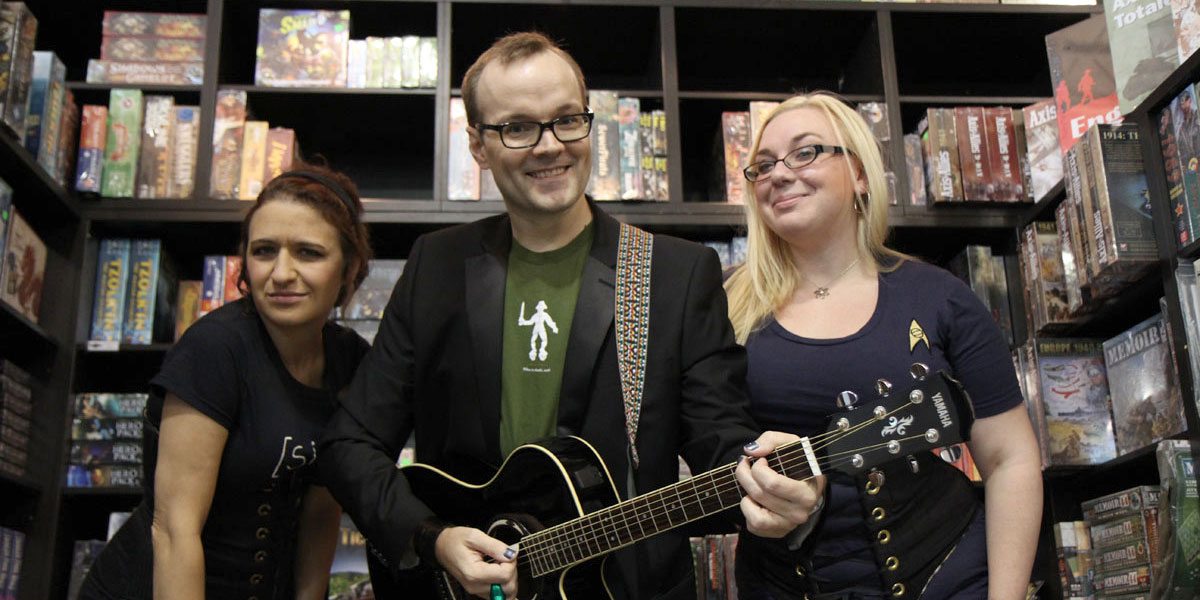 The band started as an all-female dirty pirate shanty group, but has now embraced the “nerd music” label and sings about Lego, Miyazaki, programming, and other geeky interests. The PDX Broadsides are Jessica Hebert, a Biology Ph.D. student and a member of PDXYAR, a Portland-based pirate troupe; Hollyanna McCollom of the prop- and costume-fabricating Alter Egos Society and a tour guide author; and Christian Lipski, a comics journalist and past Eisner Award judge. 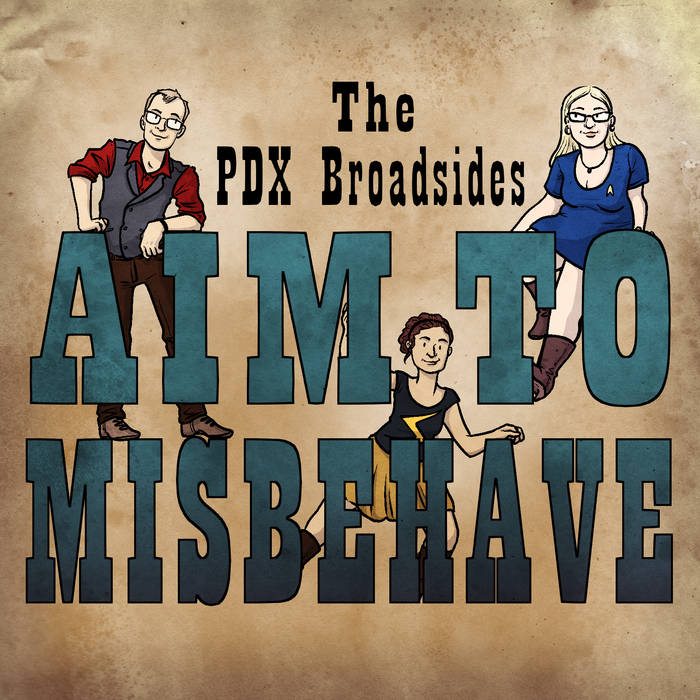 Their brand-new album, Aim to Misbehave, releases today, and it’s fantastic. I got a chance to listen to it ahead of time, and I’ve enjoyed the variety of topics they cover and the ways they sing about them. The album is for adults, but most of the songs are either kid-safe or PG. I’ll note below which ones have stronger language or references that might not be kid-appropriate.

Aim to Misbehave — the album kicks off with the title track, inspired by Firefly and sung from the perspective of Mal and his crew. It’s a folksy song that would fit well in the Firefly universe and one that Browncoats will think is pretty shiny. (Mostly kid-friendly, but there is the line “big d–n heroes” in there, a quote from the show.)

The Lego Song — Who doesn’t love Lego? This cheerful ditty celebrates the world’s most popular building bricks as something you don’t have to give up when you grow up.

Best in Life — When you’re feeling down and having a bad day, what’s a surefire way to cheer yourself up? Well, you could think of dimetrodons, of course. Or you could take Conan the Barbarian’s advice on what’s best in life: crush your enemies, and see them driven before you. Unlike “Conan the Barbarian: The Musical,” this song is upbeat and not angst-ridden.

The Story of Me — The PDX Broadsides show they do have a more serious side in this song, an autobiographical song about a girl who finds it can be hard to be as confident when she grows up. It’s a poignant story but has a hopeful note. Aubrey Webber of The Doubleclicks plays cello for this track.

Love Is BASIC — Time for a love song! About programming! The chorus of this song is a BASIC program for finding your true love. It was a fun way to spark a conversation with my kids about programming.

Superheroes Are People, Too — They may have costumes and amazing powers, but sometimes superheroes just need a little privacy to enjoy some down time–maybe to have some shawarma, for instance. This song is a public service announcement that reminds you that just because they’re public servants doesn’t make them public property

Toad’s Lament — Poor Mario: he keeps defeating Bowser, only to have a Toad inform him that, sorry, the Princess is in another castle. But what’s going on in Toad’s mind? Well, it turns out this Toad is in love with Mario and wishes he didn’t have to move on. Funny and touching.

Miyazaki Dreams — This song will strike a chord for all those who wish they could live in the world of Hayao Miyazaki’s films. Ever wished the catbus would come pick you up, or that you could be friends with a little fish? Here’s a tribute to the magic in those movies.

Paranormal Helpdesk — Trouble with monsters and bumps in the night–who you gonna call? No, not them. The Paranormal Helpdesk will answer your questions until the break of dawn, but will you please take a survey after the call is complete?

The Girl Who Waited — Okay, I’ll have to admit that I had to Google this one just to be sure, because I’m not a Whovian at all, but I’d figured it was about Doctor Who. Sung from the point of view of Amy, it’s both a lament and a declaration of independence. I liked the song, but I’m certain that I’m missing a lot of the references since I haven’t seen the episode in question.

Everybody Dies — Spoiler alert: this song is about Game of Thrones. It’s a peppy tune about what to expect when you watch the TV show, and it’s really funny. But maybe not entirely kid-appropriate (references to gory deaths, deception, and the tendency for everyone to shed their clothes).

Wheaton’s Law [explicit] — This song is all about Wil Wheaton’s Law: “Don’t be a dick.” So it has some stronger language, but mostly what makes it for adults only is that some of the descriptions of people breaking Wheaton’s Law are bawdy and rude, particularly the first verse.

Finally, there’s a bonus track if you order the whole album (digital or physical) from Bandcamp:

Nathan Fillion (Please Take Off Your Pants) — Recorded at a live show in January, this song is exactly what it sounds like. It has, as you may expect from the title, a lot of innuendo, but is actually less explicit than “Wheaton’s Law” above.

I’ve enjoyed listening to the album and I think the songs are fun. Some of them do tend to sound similar in style–upbeat and folksy–since it’s usually acoustic guitar and some vocals. So the overall sound isn’t as polished, but the lyrics are clever and catchy, and if you like geeky references they’re definitely worth checking out. My kids have been listening to it a lot lately. There’s nothing quite like two cute little girls singing about crushing their enemies.

The album is available today, and The PDX Broadsides have a few upcoming shows, including an all-ages show on Saturday, May 30, and a CD Release Party on June 5. 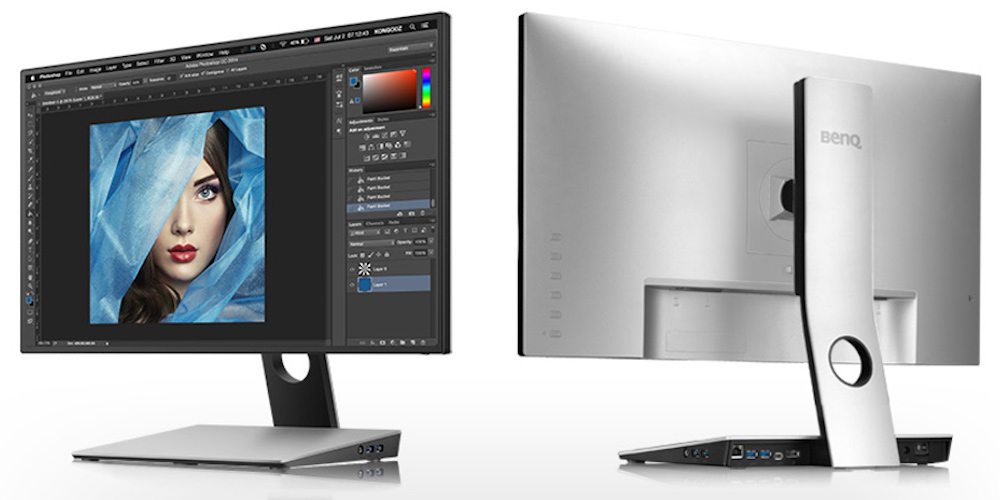 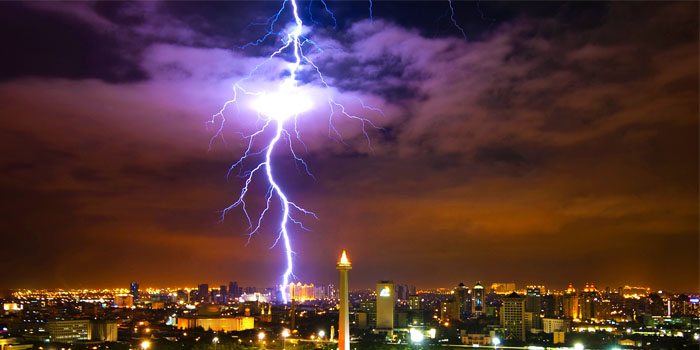 In Space, No One Will Hear Your Minifigs Scream