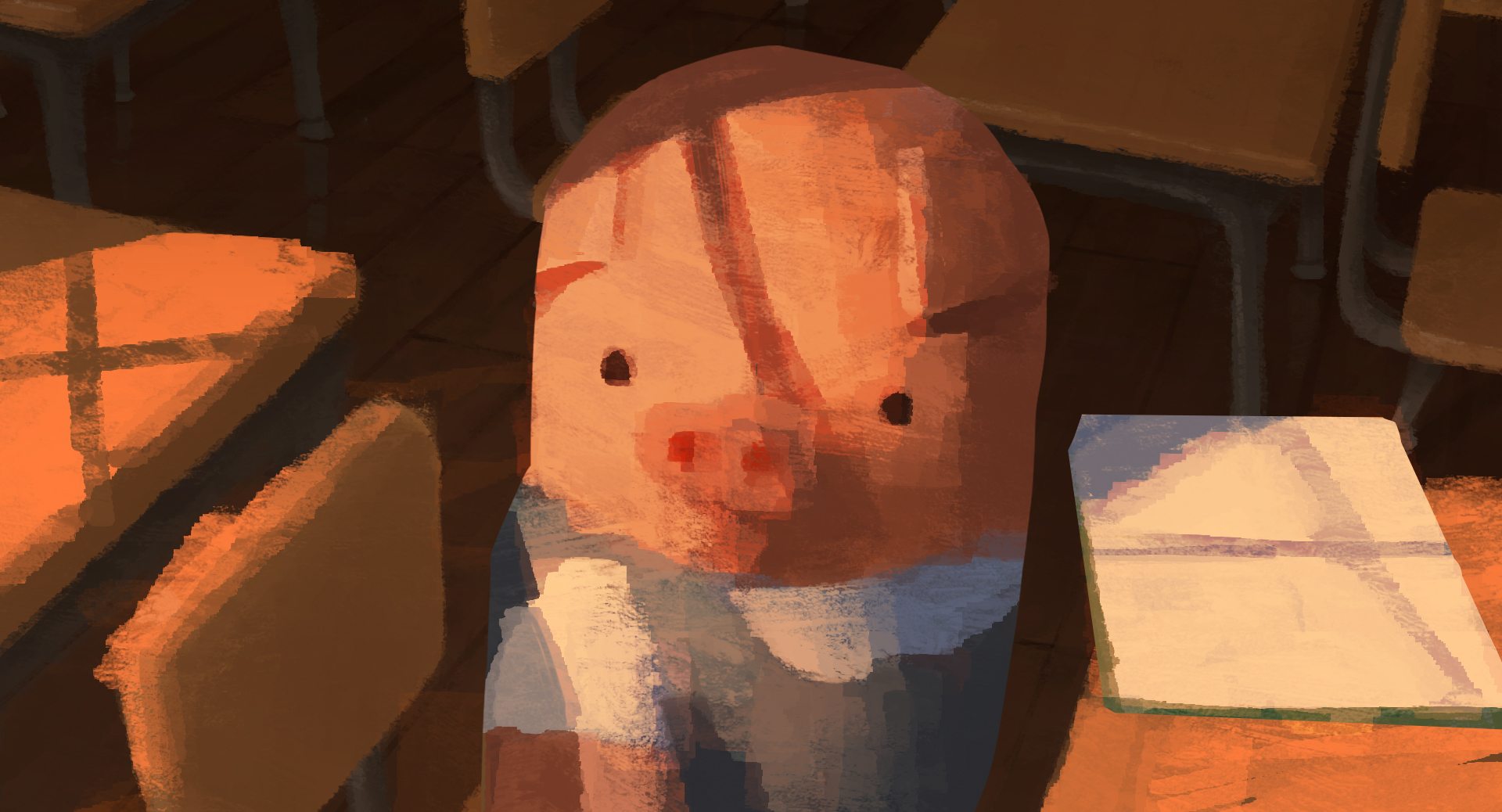 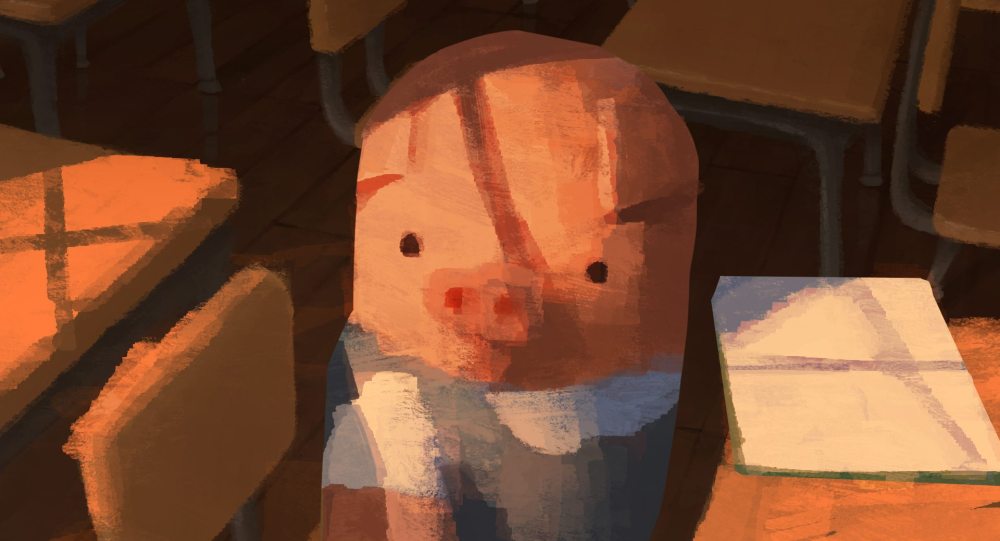 The Academy Award for Best Animated Short Film is always a collection of some of the most beautiful and artistic stories set to film in any given year. Last year was no different. Even though Disney’s Feast grabbed a lot of the headlines and spotlight (mostly by being attached to the mega-successful Big Hero 6), fellow nominee The Dam Keeper is arguably a better film.

Directed by former Pixar art directors Robert Kondo and Daisuke (Dice) Tsutsumi, The Dam Keeper tells the story of young Pig who lives and works in a windmill perched high atop a huge dam on the edge of town. His job is to keep the windmill running and thereby keep the encroaching black fog at bay. If the windmill stops, the black fog could envelop the town.

Pig is quiet, shy, and bullied by his classmates. Even though he holds the fate of the entire town in his hands (er… hooves), his classmates tease and mock him endlessly. Until one day when artistic Fox comes to town, and the two strike up an unlikely friendship.

The film looks like a painting come to life. It’s simply stunning. Betraying their Pixar roots (the two directors began development of The Dam Keeper while working on Monsters University), it’s also entirely dialogue-free. The only spoken words come via voice-over narration.

In addition to adapting the short into a feature-length film, they’re also bringing the world to life on the printed page. First Second Books recently announced that Robert and Dice are working on a series of graphic novels that will follow Pig and Fox on further adventures, set five years after the events of the short film. The first book is scheduled to release in 2016.

If you haven’t seen the film, watch the trailer…

I had the pleasure of chatting with both creators about this transition from screen to page, how it will differ, and some of the themes they’ll explore. Big thanks to Robert Kondo and Daisuke Tsutsumi for their time, and to Gina and the rest of the gang at First Second Books for helping to make this beautiful vision a reality.

GeekDad: What’s the concept behind the graphic novels? Will they be a direct sequel to the film, or will they just be set in the same world?

Robert Kondo and Dice Tsutsuki: The novels will take place several years later with our main characters coming of age. For the first time in Pig’s life, he will witness the deadly black cloud retreat far away from his dam, revealing things neither he nor his people could have imagined. His entire world opens up, both externally and internally. He and Fox, along with an unexpected companion, will have to venture out into the unknown.

GD: Have you made the leap from screen to page before? How will you divide the work on the books?

R&D: This is the first time we will work on a book together, but we’ll collaborate in ways we have found to be successful. On the film, we wrote and storyboarded together, while, in terms of look and execution, Robert focused more on the design of the world and Dice focused more on the color and lighting.

GD: How did the idea for the books come about? Did you make the film with a recognition that there were more stories to tell, or did those stories come later?

R&D: Uncovering Pig’s past and exploring the world outside the dam were ideas we talked about while we were making the short film. While we found these concepts exciting, we spent time searching for the reason, if any, we would be compelled to create a new story in this world. At Tonko House, we want to appeal to a wider audience through telling stories we are deeply and personally connected to–stories about who we are and what we have experienced. So, as it turns out, the new story comes from this deeply personal place, an experience from Dice’s personal past that relates to Pig and has given us that reason to open up this world. It’s a story we believe we have to tell.

GD: The Dam Keeper is clearly influenced by your backgrounds at Pixar. There is no dialogue among the characters, and the only spoken words come via voiceover narration. How do you intend to translate this storytelling approach on the printed page?

R&D: We definitely plan to use dialogue and are excited about this going into this new frontier to enhance, rather than change, our creative process and these characters.

GD: The film presents a powerful depiction of bullying and the often self-destructive ways that people cope with that. Is this a theme that you’ll continue to explore in the graphic novels?

R&D: We’ll see this recurring theme, and other new ones, through the journey of our characters. Our hope is that the longer format will allow us to create a deeper and more empathetic look into the psyche of some of the types of characters involved in situations like bullying.

GD: Talk to me a bit about the animation style you employed in the film. It feels like a charcoal painting come to life, and it’s incredibly unique. Will you keep a similar visual style for the books?

R&D: The look of our film comes from the way we have learned to paint over the years working in the film industry together, creating concept art and visual development. We are planning to keep this visual style for the books.

GD: Were you influenced at all by the animation in The Tale of the Princess Kaguya, which employs a similar style?

R&D: We did not see The Tale of The Princess Kaguya until after our film production began. We are big fans of Ghibli and Isao Takahata–they have had an influence on our childhoods and artwork, both in tone and story, as well as the visual style in which they are executed.

GD: Although I enjoyed Feast, I think The Dam Keeper was more deserving of the Academy Award for a number of reasons. Likewise, I think one or two of the nominees in the Best Animated Feature category were more deserving than the film that won, even though I really like Big Hero 6. Creatively, do you ever get frustrated that “big prizes,” such as the Oscars, are often won by films that have more money for publicity and distribution? Or is that not something you think about?

R&D: We think these big awards are incredible opportunities for films that don’t have the large budgets or major studio backing. Awareness of our film was heightened by the Academy Awards, and we continue to benefit from the exposure. We are big fans of Patrick Osborne and Feast and believe that any one of the films that was nominated had a great chance at winning–and each would have been deserving. We are honored to have Patrick represent the animation industry and the short filmmakers for the year of film. All the filmmakers we met are going to make another film after the awards with more fuel and fire than ever, thanks to the experience. In the end, we all went home winners.

GD: Are you working on anything else at the moment? Any other films on the horizon, or is all of your energy focused on the books right now?

R&D: Our primary focus will be on the books and the feature film. We are also already working with CG studios in Japan, developing stories and animation tests for future projects and production. We are teaching painting online with Schoolism.com. The journey of our short film, The Dam Keeper, marches on as we are taking the film to elementary schools in San Francisco, developing a curriculum using the story as a catalyst to discuss cinema and the world around us.

‘Mythica: A Quest for Heroes’ Review and Exclusive Clip