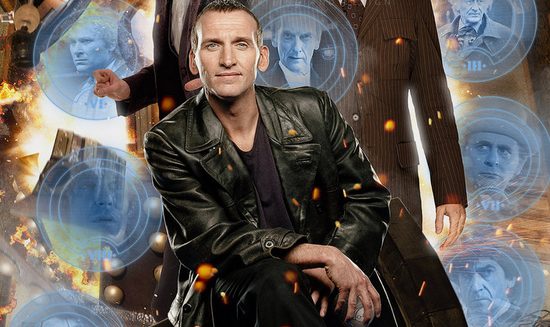 This story is Part One of a Two-Part Series Commemorating The Tenth Anniversary of The Ninth Doctor.

Doctor Who fans have another milestone to celebrate, as 2015 marks the Tenth Anniversary of the debut of the show’s return to television after a more than 16-year series hiatus, not including the one-time made-for-television movie in 1996.

Series One of the new era of The Doctor debuted March 26, 2005, featuring the streetwise leather-and-jeans-clad Ninth Doctor, portrayed by Christopher Eccleston. The show reached a new generation of  soon-to-be Whovians, many of whom had never before seen the show. The series also introduced a new companion, Rose Tyler, played by Billie Piper, and Time Agent “Captain” Jack Harkness, played by John Barrowman. Harkness’s character became so popular, he gained his own edgy spin-off series, Torchwood, in 2006.

Cardiff Bay-based writer and designer Will Brooks has become very familiar with nearly every episode of Doctor Who as part of his ongoing daily Who-watching project, “The 50 Year Diary,” for the UK-based blog, Doctor Who Online.

“I started Jan. 1, 2013 with An Unearthly Child, and I’ve watched one episode a day every day since,” he said. “I’m currently in the middle of David Tennant’s run—so I’m closing in on the finishing line, now!”

All of Brooks’s entries for the first four Doctors (William Hartnell through Tom Baker), are available in book form via Page Turner Publishing, as well as in a Kindle version on Amazon.

“It’s been great to go back and see the series in the way viewers did the first time around,” he said. “You really get a better feel for the way that the show evolves over its first 50 years, and I’ve found so much more to love in the program than I even realized was there. I very much doubt this will be the last time I do a marathon like this.”

Having just run through Eccleston’s reign in January, Brooks provided in his series some very frank and truthful observations, criticisms, and kudos for watching every Ninth Doctor episode from Rose to The Parting of Ways for a second time.

Despite the growing pains and flaws of the newly-relaunched series, however, Brooks agreed Series One’s success was key in keeping the show alive today.

“[It was] vital for that first series to ‘get it right’ so that the program could continue and grow into the massive global success it’s become in the decade since,” he said. “As for what it got so right, it really serves to introduce the program to a new audience who didn’t know what it was. Whereas the Paul McGann [Eighth Doctor] TV movie opens with a regeneration, and there’s moments where you cut from a police box flying through space to a massive room and a funny little Scotsman in a tweed jacket, Rose, and, indeed, the whole of Series One, introduces each element to you with the assumption that you’ve no idea. It takes you as a completely new viewer and draws you into the Doctor’s world.”

Chronicling his Who-watching isn’t Brooks’s only achievement. He has a long line of impressive clients from audio drama creators Big Finish Productions and BBC Worldwide, to the popular furniture design company IKEA. Doctor Who fans may be familiar with Brooks’s work through this year’s cover designs for a Fifth Doctor audio drama trilogy, part of Big Finish’s Main Range series.

“I’ve been very lucky to be invited to contribute to the range, and feel incredibly proud to have my work alongside that of so many people I admire,” Brooks said. “Aside from that, I’ve recently been part of a team creating a range of exclusive postcards for the Doctor Who Experience in Cardiff.”

Brooks said what people seem to most recognize of his, however, are his just-for-fun graphics he spent very little time on, thanks mostly to the rapid-paced grapevine of social media.

“In 2013, on the day of Peter Capaldi’s reveal as the new Doctor, I quickly threw together a flow chart for ‘The Regeneration Cycle’ based on a discussion I’d had with a friend, commenting on how you go from initially hating the thought of this new person as The Doctor to absolutely loving them, and never wanting them to leave,” he said. “It’s been shared around the internet far more than any of the work I’ve actually spent hours on.”

As far as the Ninth Doctor’s incarnation lasting only one season, Brooks said in “The 50 Year Diary” that he felt one season is all this Doctor needed. He also mentioned his belief that writer and producer Russell T. Davies planned this series out so that if no other episodes were commissioned, they would “stand on their own” as a self-contained story.

“Even though I think [Eccleston’s] great, these 13 episodes tell a complete story so well, that it might somehow lessen them to spend another year in the company of this incarnation,” Brooks wrote.

He added that there also doesn’t need be too much unnecessary fanfare for the Ninth Doctor’s landmark anniversary. A simple commemoration, for a no-frills Doctor, and the no-nonsense actor who portrayed him, would be very appropriate.

“It’s a great achievement to have made it ten years with the show still going strong, and more popular, globally, than ever, but I’m not sure it’s something that needs to be acknowledged,” Brooks said. “Obviously, I’d love a Tenth Anniversary edition of the series to be released with some new special features–I’m a real sucker for DVD special features–a kind of retrospective look back at that first year, or maybe a simple documentary would suffice.”

He said there have been a few retrospective features for other eras in recent years, both in Doctor Who Magazine, and on the “classic” DVDs. Brooks feels this would be a suitable way to acknowledge Series One.

This type of retrospective could even be done in a way that doesn’t include any of the much-publicized theories about why Eccleston departed the show after just one, successful season, but rather concentrate on the impact of the series itself and the cast’s performances.

“It’s been interesting to see people looking back on that time now that enough water has flowed under enough bridges,” he said.

Brooks admits, however important it was for this first series to “get it right,” for the franchise to continue on the air successfully, he said Doctor Who fans are so loyal, they will always be around, series or no series.

“The Doctor Who fanbase always survives,”  Brooks said. “Had that first series been a failure, we’d all simply be hiding in the darkness like the Daleks in Bad Wolf, waiting for the next resurrection.”

Part Two: The return of the Ninth Doctor to comic books.

The GeekMoms Podcast #38: All Things Doctor Who