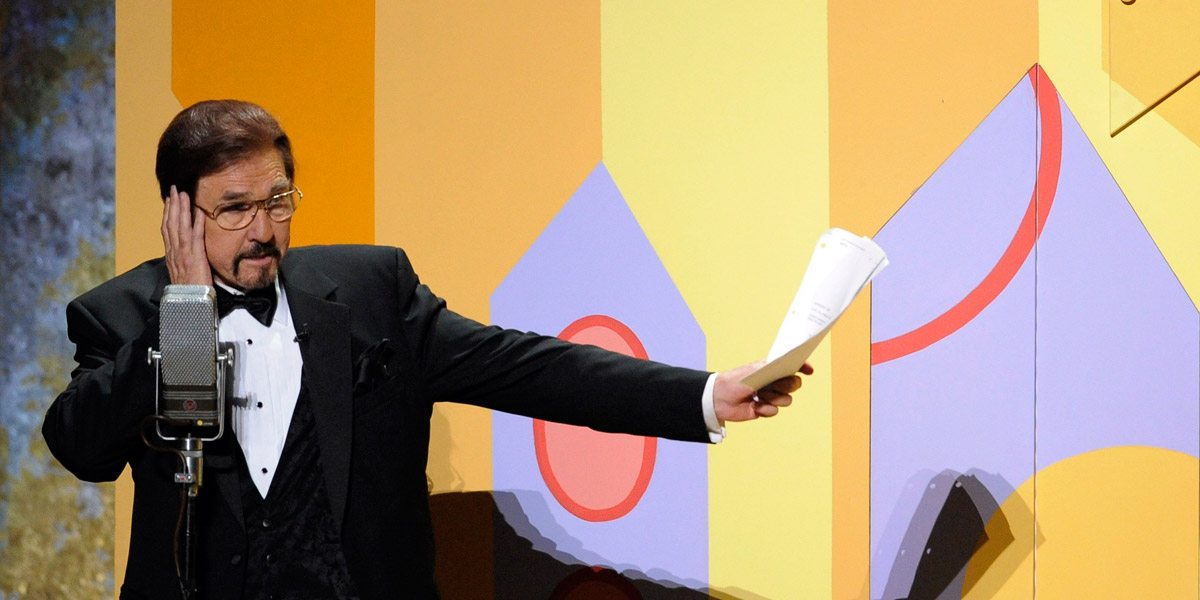 The last great radio voice has left us. Gary Owens, the voice of Roger Ramjet, Powdered Toast Man, Space Ghost, the Blue Falcon, and many more, died at his home in Encino, California, on Thursday. He was 80 years old and had been ill for some time.

I met Gary at a CAPS (Comic Art Professional Society) meeting a few years ago, and was surprised to discover that the affable goofball with the stentorian voice that he played on Laugh-In was the real deal. That was his real voice, and he was exactly like that, a masterful storyteller who could drift from backstage stories of the Golden Age of Hollywood to outright surreal lunacy without missing a beat. He was always kind and gracious; the first time I met him, he stuck out his hand and said “hi, I’m Gary” as if he didn’t think I would have recognized either the face or that unmistakeable voice.

At CAPS, Gary was one of us, a cartoonist. My then-teenage son had accompanied me to this meeting and had brought along a brand-new skateboard, which artists including Sergio Aragones, Tone Rodriguez, and Scott Shaw took turns decorating with Sharpies. Gary took his turn as well, festooning the board with a goofy-looking face. He told me that his original ambition had been to be a cartoonist before he fell into radio in South Dakota after high school; he had previously completed the Famous Artists Cartoon Correspondence Course (those “can you draw me?” ads with the drawing of a pirate or a duck), and his teacher had been a pre-Peanuts Charles Schulz.

He was also one of us: a geek. He loved monster movies, comics, cartoons, science fiction, and had a wealth of arcane knowledge of the stories and the people who created them. He could talk at length about the guys who played gorillas, the directors who made cheesy low-budget science fiction flicks, about comic book artists and toys and other geeky minutiae. And all of his stories were kind; he never ran anyone down or derived humor from ridicule.

His favorite kind of comedy was silly surreal nonsense. He liked to invent nonsense words like “insegrevious,” or rattle off silly-but-real words like “floccinaucinihilipilification” (the act of estimating something as worthless). When I was a kid, long before Laugh-In, Gary Owens was a fixture on Los Angeles radio, and he was my mother’s favorite. For 20 years on KMPC 710, he would tell corny jokes (“…and there’s Mr. and Mrs. Spider-Man; they’re newly-webs!”), chat with callers, occasionally play a record, and, every so often, he’d play some bit of surreal nonsense that he’d pre-recorded. Eventually, all these silly bits were collected into a comedy album, Put Your Head on My Finger. To this day I can still recite chunks of “the Nurny Creed” from memory. (“A nurny is two krelmans joined together at the gums; a nurny can be named Bernie, or Ernie, or even be an attorney…” Hey, eight-year-old me thought it was hilarious.)

I saw Gary every few years at various functions or at Comic-Con, and was always surprised when he remembered my name; the last time I saw him was when we honored him at a CAPS banquet a few years ago. He looked tired, but he was still his genial self, still humble, kind, and ingratiating. I’m not sure I’ve ever met anyone as universally well-liked as Gary Owens.