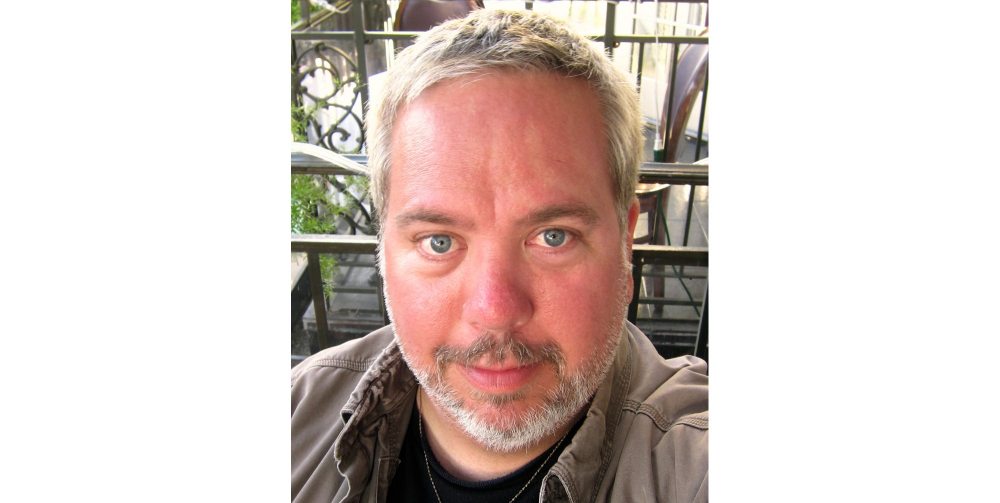 Some of the staff of GeekDad have been working on this blog for nearly eight years, yet we’ve never taken the time to properly introduce ourselves. Ken Denmead is one of those pioneering GeekDads. He’s been with the blog since the very first wave of writers was asked to join in May of 2007. But who is Ken Denmead and what makes him tick? Let’s find out in the very first edition of “Meet a GeekDad”!

So, first off, tell us about your family.

We’re a very close, geeky family. My wife is an elementary school teacher in a semi-urban district, and still dreams that Stargate SG-1 will come back. My two boys are both in high school. The older one is a sports-geek, and can quote player and game stats until your ears fall off. He’s also a nationally-competitive youth bowler. My younger son is a huge videogame fan and has been known to speed-finish single-player FPSes in mere hours.

What are the things that make you especially geeky?

If I’m into something, I really get into it, learn everything I can about it, and seek to master it. I started playing D&D in elementary school, have watched every episode of every Star Trek-related TV show multiple times, and always end up being the tech-support person in any situation.

What do you do when you’re not running GeekDad?

By day, I’m a civil engineer, consulting on a major transportation infrastructure project in the SF Bay Area. Between that, GeekDad, the occasional videogame (Far Cry 4 is my current joy), being a coffee and beer snob, and living a good portion of every weekend at bowling alleys, life keeps me pretty busy.

How did you get involved in GeekDad and how did that evolve into your current position of publisher?

I joined Geekdad in 2007, after Chris Anderson (then Editor-in-Chief of Wired) put out a call for writers. I fell into it with gusto, writing every day, and starting the podcast, and by the end of the year, Chris asked me to take charge. Within a couple years, Chris just handed the whole thing to me.

Can you tell readers about the decision to leave Wired in 2013?

2013 was a time of transition at Wired. Chris left. A couple other people who were our friends inside the magazine and dot-com sides left, and we didn’t like the way the business side of things were going, so we felt it was time for a change.

What are your future plans for the blog?

We want to grow, and grow, and grow. We’re adding lots of writers this year, we’re assembling a podcast network filled with content for people like us. And who knows? Someday, maybe there will be a GeekDadCon!

Do you write anywhere else?

That we’ve built up a community of truly awesome people from all around THE FREAKING WORLD who love to share their lives and interests with each other and the internet at large. I love that we have people who are rocket scientists, game designers and illustrators, authors, Hollywood archery coaches, robot-builders, application developers, and more. We have people who work for NASA, Google, PBS, and quite a few who work for themselves. We have people who live in nearly every state of the union, much of Canada, Mexico, South America, Europe, Asia, and Australia. We represent the wide spectrum of geeks and parents, and I don’t know where else I’d ever have had the chance to meet them all.

Do you have a favorite geeky pursuit?

I’m nuts about holiday lighting. I have a programmable 16-channel lighting controller, and three 15′-long fully programmable RGB LED light ribbons, and I do coordinates music/light shows every season. I’ve dived deep into the sub-community online and discovered that I’m actually just a neophyte, and until I have more than 128 channels, what I’m doing is just “cute.”

If we see you at a convention, you’re most likely to be…

While I love and admire both, I fall heavily on the side of Star Trek. I’ve been embedded in Trek since I used to get home from elementary school and watch TOS reruns every night, to running a Trek-based email RPG for a few years. I love it because it’s optimistic and aspirational, and even when the technobabble gets crazy, they’re trying to have a real scientific basis for everything they do.

If you have a question you’d like to ask Ken, leave it in the comments below and he’ll be happy to answer it. We’ll be back next week with another chance to Meet a GeekDad.