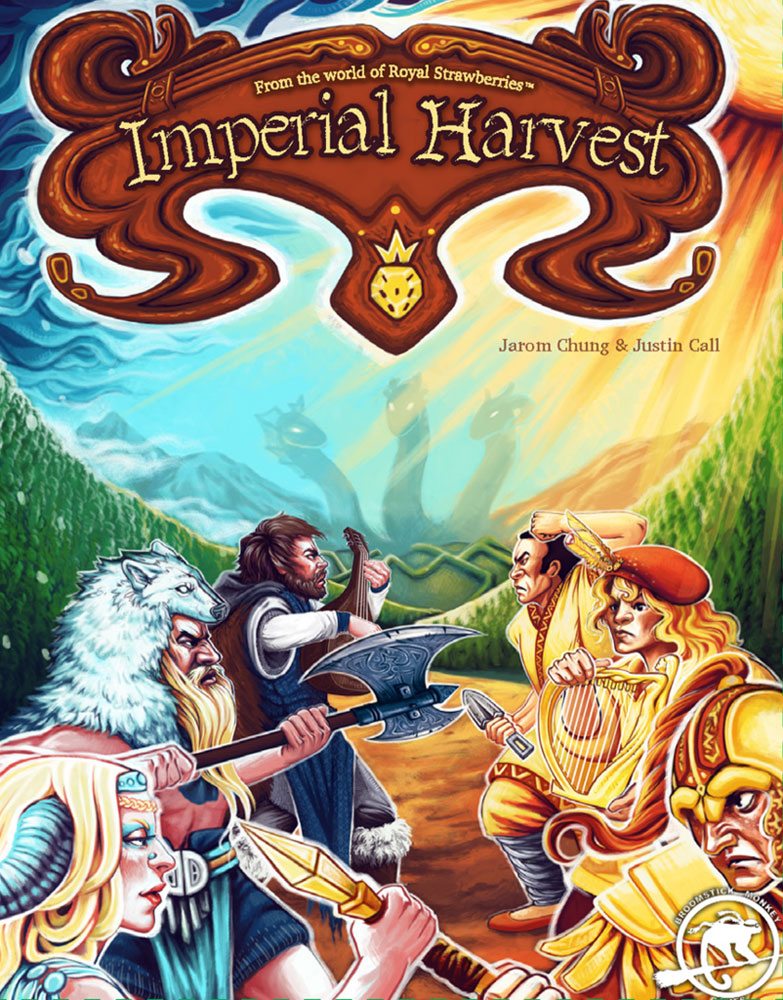 Imperial Harvest is a strategy game about a great conflict: the Imperial Servants and the Northern Raiders use their abilities to maneuver through the Imperial Gardens, avoid attacks from the Hydra, and collect–wait for it–strawberries. But not just any strawberries: these magical Royal Strawberries unlock powers and abilities for anyone carrying them.

At a glance: Imperial Harvest is for 2 players (up to 8 players with multiple copies of the game), ages 10 and up, and takes about 20 minutes to play. (Adding more players will increase the game length.) It is currently seeking funding on Kickstarter, and the pledge amount for the base game is $15 (plus shipping); for $22 you’ll also get additional characters and wooden character tokens.

(Stretch goals may add other characters or components.)

I was sent a prototype of Imperial Harvest, so the components are cardstock and not final, though it does have a lot of finished artwork already. The artwork itself is not bad. The garden tiles have variations to make them interesting, and the character portraits are in a style comparable to other fantasy games, somewhere between realistic and cartoony. The one thing I’d like to see changed is to make the hedges stand out more visibly on the board. There’s green grass between the paving stones, and then the hedges are thicker, darker green segments, but they’re not always obvious at a glance even though it’s important to know what things are within line of sight.

Each of the character cards is double-sided, with a basic side and an advanced side that has more powers and abilities. The cards are fairly easy to interpret, and they’re also tarot-sized cards so there’s plenty of room for the artwork, the text, and the three illustrated “notches” on the side to indicate that each character can carry three strawberries.

There are actually two rulebooks: one that is used specifically for setting up the board, and the other that explains gameplay. I didn’t feel strongly one way or the other, though once you’ve set up the board, I guess it’s nice to put that one away and just refer to the rules when necessary. I did find that the rulebook left out some specific things, though there have been rules tweaks and rulebook changes that may address some of those concerns before the game is published.

The whole thing fits in a fairly small box, so it’s a compact game despite the long list of components.

The rulebook and the setup guide are both available as PDFs.

The goal of the game is to have the most points by collecting strawberries and depositing them in your strawberry camp.

First, each player chooses a team and takes the cards and tokens for that team. (With the additional characters you’ll still choose a team of three characters.) Then the board is set up: basically you have a 4×4 grid in the center surrounded by a moat, and then a border that’s 2 spaces wide. Each player has a character camp and a strawberry camp, and these will be in the corners of the board. There are strawberry tokens on the board, bridges across the moats, and two Hydras in the moat. Your character tokens start off on your character camp tile.

On each turn, you’ll get to choose two of your three characters–and on each succeeding turn, you must choose the one that didn’t get used the previous turn. Each character shows a number of action points–you can spend these points to move, pluck strawberries, deposit strawberries in your camp, passing strawberries to adjacent characters, and activating character abilities.

You can also give up activating one of your characters in order to move the Hydra one space (two if it goes past a bridge). The Hydra is always attacking the four orthogonally adjacent spaces, and any character that moves into those spaces gets attacked. If a character is attacked (whether by the Hydra or another player), it loses all the strawberries it was carrying, and respawns back at the player’s character camp.

The game lasts 14 turns (7 rounds), or ends if there are no more strawberries on the board after the Northern Raiders (the second player) ends a turn. You gain 1 point each time you pluck a strawberry. At the end of the game, any strawberries deposited in your camp are worth 2 points each, and strawberries your characters are still holding are worth 1 point each. Higher score wins; ties go to the player with more strawberries.

Imperial Harvest is a nice little tactical strategy game with a quirky theme. A quick look at Broomstick Monkey Games’ website shows that they’ve got a few more games planned that take place in the same world–I guess they just have a thing for strawberries.

Although my copy of the game was a prototype, there was already a lot of completed artwork and design. In my opinion the artwork isn’t top-notch but is fairly well-done and fits the theme. The board itself looks really nice and the character tokens have icons rather than full artwork, which works well. (With the additional characters in the game, you’ll use the same three icons but they will represent different characters.) With a minor change to make the hedges more visible, I think the board and tokens would be excellent. I do like the modular board and double-sided tiles, because it means that the arrangement of hedges will be different each time.

I haven’t played enough to know how evenly the two teams are balanced, but I like asymmetric powers and so far they seem pretty closely matched. The Imperial Servants have more movement and can plant hedges to block movement and line of sight; the Northern Raiders can chop down hedges so the Sorceress can use her line of sight to control other pieces. Throughout it all, there are also the Hydra–because of the way the moat is arranged, there aren’t a lot of spaces that are totally inaccessible to the Hydra except on the outer border, and you’ll most likely need to walk around some hedges at some point. So strategic placement of the Hydra can really restrict your opponent’s movement.

The game is pretty quick (at least with two players). Since you’re just activating two characters each turn, with a limited number of actions per character, the turns go fairly quickly. When I first saw that the game was 14 turns, I didn’t realize how short it would feel–and in fact, when my first game ended, we hadn’t managed to pick all the strawberries from the board yet, let alone get them back to camp to deposit them.

The basic and advanced options for the characters is also a nice option. It lets you get used to a character without having to worry about a whole bunch of different abilities when you’re first learning the game. The advanced characters don’t add that many new abilities, either, so I think after your first or second game you’re probably ready to start using the advanced characters.

There are options for playing the game with more players if you have multiple copies of the game, but I haven’t had a chance to try that yet. You’ll play with two teams, and the maps can get pretty big and involved, but the game will also take longer. Since I don’t play a lot of two-player-only games in my regular game nights, I would probably prefer to play the team game, but it’s ideal with an even number of players. (With an odd number, one player will have to control more characters to even out the teams.)

Tactical strategy games can be tricky: there’s no luck involved, because everything is open information. You know your abilities and your opponent’s abilities, their positions on the board, and so on. Everything depends on how well you can plan out your moves and whether you can predict (or counter) your opponent’s moves. Some people really love them because they’re very much skill-based, and some people prefer to have a little more of an element of chance (or at least hidden information) in their games. Imperial Harvest will appeal to those who want a strategic challenge, but not necessarily those who want a bit of luck and randomness.

Overall, I think it’s a cool game for two players; the gameplay is fairly quick, though it does have a bit to set up before you can begin. I can’t comment at this point on playing the team variant, but I like that it does have that option. For more information about the game or to make a pledge, visit the Imperial Harvest Kickstarter page. 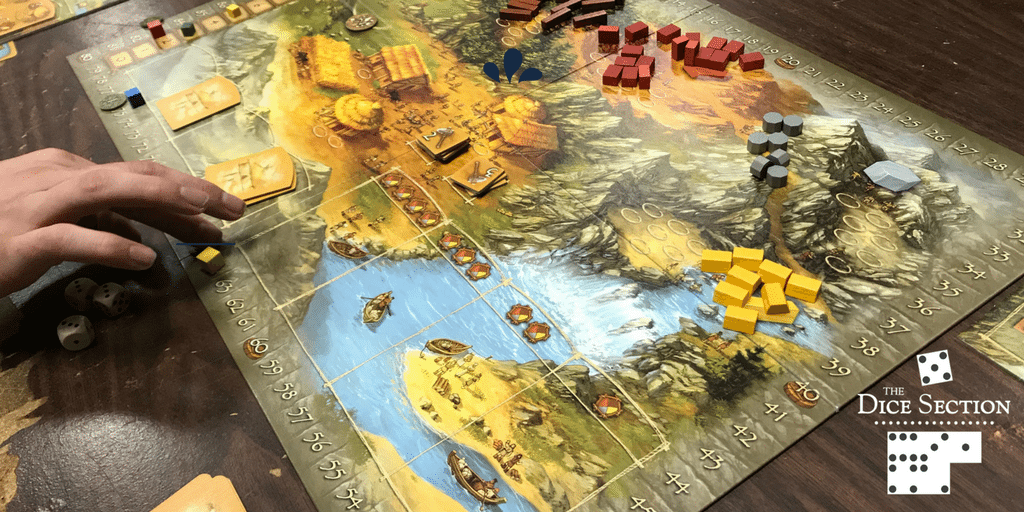