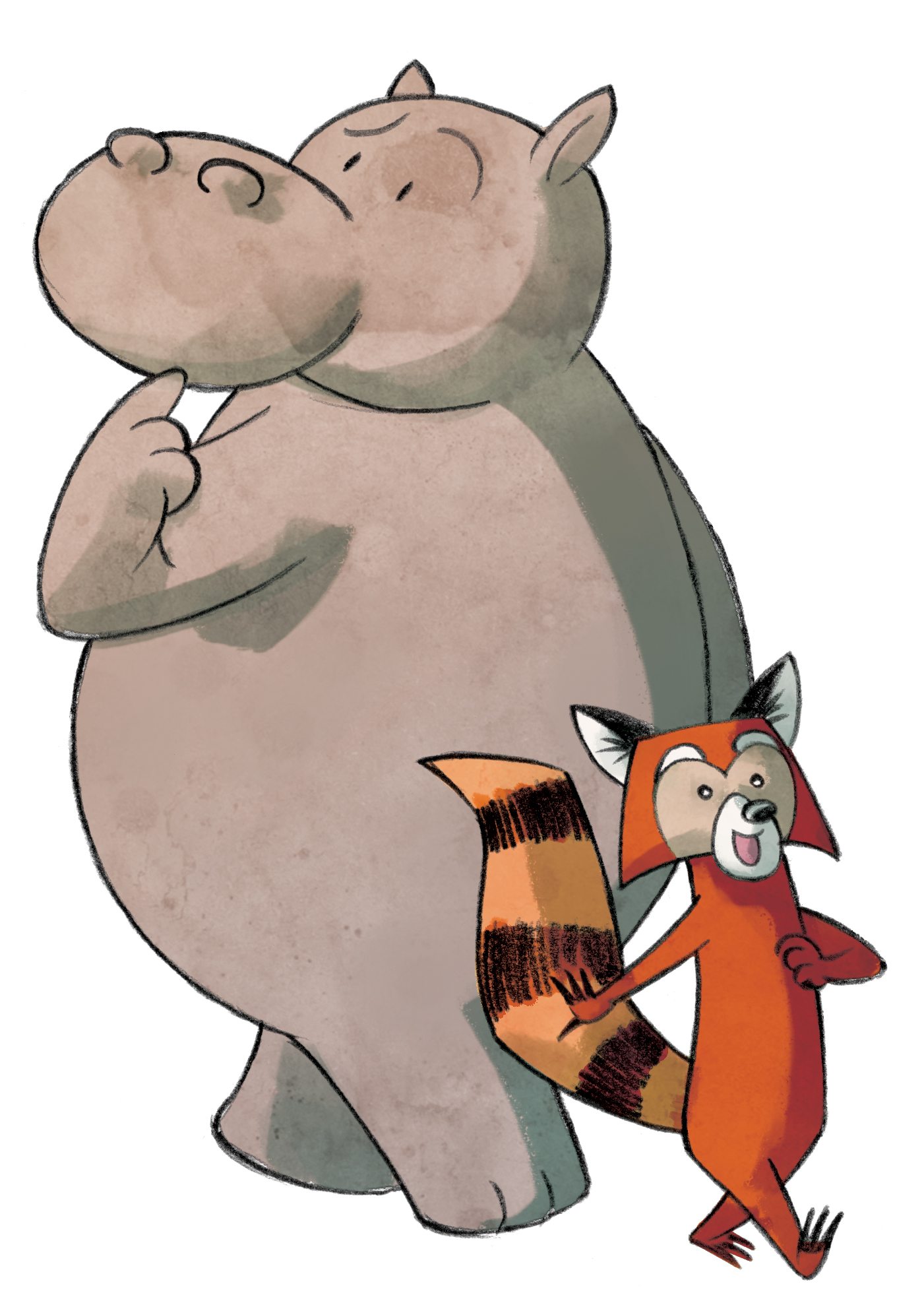 John Patrick Green is the illustrator and co-creator of the graphic novel Teen Boat! with writer Dave Roman. He grew up on Long Island and has been making his own comics since middle school. Now John has a solo book in the works, a kids’ graphic novel to be published by First Second Books in Spring 2016.

Hippopotamister is the tale of (you guessed it) a hippo and his friend, Red Panda. Tired of living in the rundown city zoo, they run away and seek jobs in the human world, where Hippo must become “Hippopotamister” to get by. Hippo excels at each job, but Red Panda keeps getting them fired. Longing for his home, Hippo goes back to the zoo and discovers he can return the place to its former glory using his newfound skills. But can he do it without his friend Red Panda?

We’re delighted to share this exclusive first look at Hippopotamister–an eight-page excerpt from the graphic novel. I also caught up with John Patrick Green to ask him a few questions about his work. You’ll find the interview below the art.

Melissa Wiley: John, thanks for chatting with me! Can you tell me about the genesis of Hippopotamister?

John Patrick Green: It’s hard to pinpoint exactly where the story for Hippopotamister came for. I knew that First Second Books wanted to do more graphic novels aimed at a younger audience, and I wanted to do a book with them, so I did make a conscious effort to come up with something that might be a good fit. An animal protagonist is always a natural fit for a kids’ book, and I’m a fan of puns and wordplay. I think I actually did just start listing off animals that are typically found in zoos, and the name “Hippopotamister” came out of this idea of a child mispronouncing “hippopotamus.” This led to the hippo thinking he’s human, which seemed funny enough to me–like how it’s funny when a pet dog does something that makes you say “aw, he thinks he’s people.” The concept of a wild animal integrating itself into human society and getting jobs and none of the people noticing it’s not a person isn’t entirely new, but the story starting rolling that way and I couldn’t stop it.

MW: What has the solo experience been like for you, compared to your experience collaborating on Teen Boat! with Dave Roman?

JPG: The biggest difference is the involvement with the publisher, but in many ways the resulting experience is very similar. While our books Jax Epoch and the Quicken Forbidden and Teen Boat! have been collected and released by publishers, they started as self-published comics. It was just Dave and I coming up with the stories and art and releasing them to the wild via comic distributors and conventions. We didn’t start off with an editor or a production designer or a marketing plan–that all came after we’d basically completed the projects. With Hippopotamister, I outlined the story and did thumbnails and sample art, but the actual look of the character Hippopotamister didn’t take shape until after the book was already signed up. So while I’m not working with Dave on this book, it still feels like I’m collaborating with people, because my editor will provide feedback on the story or art, and the marketing department will offer ideas of how to get the book out there. With Dave, I was never working in a vacuum, and with First Second I don’t feel like I’m working in a vacuum either.

MW: How did you wind up writing for kids?

JPG: I took a pretty bizarre path to get there. I starting creating and selling my own comics when I was younger, and since I was a kid and all my friends were kids, I was basically making comics I and they would like. My approach to creating comics hasn’t really changed from making something I myself would like to read. My first actual comics-industry job out of college was for an “adult” comics publisher. But that only lasted a year, and my next job found me at Disney Adventures Magazine, where I started as the comics assistant. Over the course of my nine years there, I’d eventually end up writing comics based off Toy Story or Kim Possible, and even wrote and illustrated a gag strip called The Last Laugh. When Disney Adventures shut down I continued writing some more licensed kids’ comics, mostly based off Shrek and Madagascar, for some Dreamworks magazines. And some time after that, Disney came back into the picture and I started working on Phineas and Ferb comics.

Making comics for kids has pretty much been something I’ve always wanted to do, and have always been doing. Now just happened to be the right time to do my own graphic novel for a young audience!

MW: What writers and artists are among your influences?

JPG: It’s funny, I’ve been so focused on just making the comics I am right now that when I try to think of influences they all seem out of date. As a little kid, Garfield had a big impact on me. I was always drawing when I was little, but it was the newspaper strip that made me want to use my art talent to make comics. Calvin and Hobbes was also a huge influence, but it debuted later and I was older still before it actually showed up in my local paper. I’d sent comics strips I drew to Garfield creator Jim Davis, and he wrote back personally encouraging me to keep doing it.

That was a big deal, and if it wasn’t for that, and for being raised in an environment that let me pursue art, my career (in art or even another field altogether) may have gone a different direction. My maternal grandfather had wanted to be an artist, I think even having been an art assistant as a summer job, but his upbringing didn’t allow him to continue pursuing it. He became a military man, a lawyer, and mayor of my home town, but he’d kept all these old illustration books. He passed them on to me, which included a lot of sketches he’d done in the margins, and pretty much set me on the path he wasn’t able to take.

MW: That’s so cool about getting a letter from Jim Davis! Do you remember the first comic you ever read?

JPG: My older brother introduced me to comic books, but I don’t remember what ones he’d bring into the house. I recall not really getting into comics until I was allowed to tag along to the local smoke shop which had a spinner rack. The first comic I bought with my own money was The Gargoyle #2 (of a four-issue limited series) from Marvel with art by Bill Sienkiewicz. It had a painted cover and the art was nothing like what my expectations of a “comic book” were. I was of course familiar with Batman, Superman, Spider-Man, and so on–kids don’t need to read the comics to know of or be fans of these characters or know what they look like. But here was this comic about a character I had no clue about, drawn in a style wholly unfamiliar to me. It wasn’t long before I stopped going to the smoke shop and was spending my entire allowance at a full-fledged comic shop.

MW: What comics were your favorites growing up?

JPG: I was mostly a Marvel fan. I wasn’t big into Avengers or Fantastic Four or even Spider-Man, but Daredevil and any mutant book I read heavily. X-Men, New Mutants, Alpha Flight, and eventually X-Factor, and anytime there were crossovers with other books like Power Pack and stuff. And while I didn’t read much Spider-Man, I was a superfan of Peter Porker, the Spectacular Spider-Ham. The comic shop also offered plenty of fare that couldn’t be found on the spinner rack: Love and Rockets, Teenage Mutant Ninja Turtles, Usagi Yojimbo. Just about any indy comic I’d come across, I’d give a shot.

MW: Since part of Hippopotamister takes place in a zoo, I have to ask: what’s your favorite zoo?

JPG: So far, I’ve been to the San Diego Zoo, the Bronx Zoo, and the New York City Central Park Zoo. While it’s super tiny, I really like the Central Park Zoo. This tiny space in the middle of a city that has wild animals in it is definitely an inspiration for Hippopotamister. And they have red pandas.

I also enjoy things that are zoo-like: I’d visit the Coney Island Aquarium a lot as a kid, and one of my favorite places in the whole world is the New York Museum of Natural History, which of course features animals from all over the world that Teddy Roosevelt captured with his own bare hands. And if it counts, I’d add Disney’s Animal Kingdom to the list, specifically the park’s devoted hotel, which has guest windows overlooking the animal run. You can wake up and have a giraffe at your window!

MW: Are you more of a Hippo or a Red Panda?

JPG: Good question. I’m very much both, but probably more like Hippo. Red Panda is an overconfident extrovert, and Hippo is more of a shy, exceptionally skilled recluse. But together they make the perfect team!

MW: At GeekMom we always like to hear about creators’ geeky passions. Can you tell us about some of yours?

JPG: As a child of the ’80s it’s unsurprising that I’m a big Star Wars fan. While I love Star Wars as a whole, I’m really just an Original Trilogy guy. I collected the toys and stuff, but wasn’t into the Expanded Universe much, other than a couple of novels and comics and video games. Nowadays my geekiest passion is LEGO. I played with LEGOs all my life, and now as an adult I have the disposable income to get the insanely large and expensive sets. And of course it also satisfies my passion for Star Wars, what with the licensed sets.

Now if only I had the time to put some of the sets together. I’m just too busy making comics!

MW: Thanks so much, John! We’ll be looking forward to the rest of Hippopotamister. 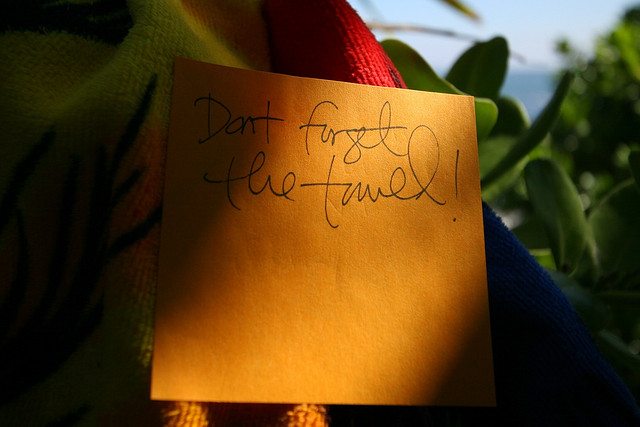 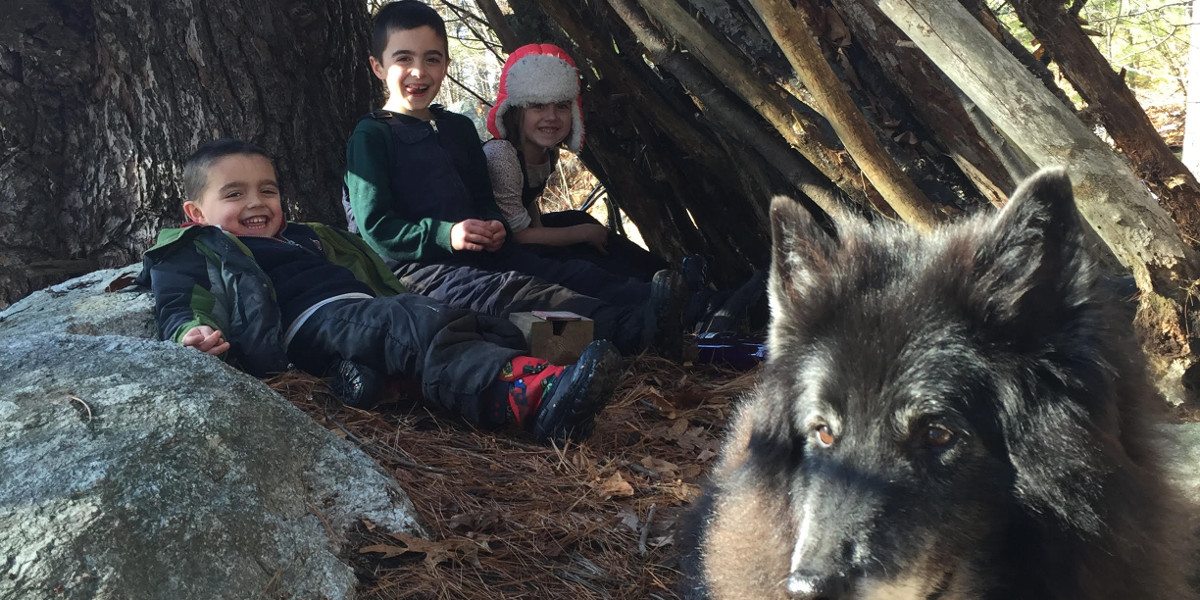