If there’s one thing Logitech does better than anyone else, it’s keyboards that augment other devices. For example, when the early iPads came out, while the touch keyboard was cool, people really wanted the tactile feel of a real keyboard (as well as a little more real estate). The Logitech Ultrathin Keyboard Cover was pretty much perfect (I still have the one I reviewed over two years ago, and it’s integral to my daily life). And their solar keyboards are amazing – they just go and go and go.

Now they’ve done it again, and devised a keyboard that helps us merge all the various devices we’re likely to use during the day. Think about how you work. You have a desktop computer in front of you for the big stuff. And then you have a table and/or phone sitting on the desk next to you for receiving texts, or maybe to act as your social media tool. Each device has its own keyboard, and you have to move between each one as you work. That doesn’t have to be true anymore. With the Multi-Device Keyboard K480, Logitech builds on their mastery of the magical Bluetooth protocol to deliver a keyboard that will sync with, and allow you to switch between, multiple devices at once. 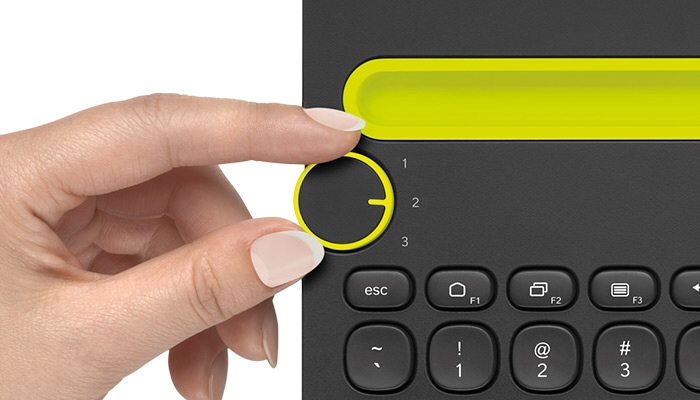 The K480 is a nicely solid plastic keyboard with a layout and size similar to the Apple Wireless Keyboard. But it has a couple extra features. Primary is the dial on the left that lets the user switch between three devices. All you do to set it up is choose a device number (1, 2, or 3), and press either PC or “i” sync buttons depending upon which you’re using. The keyboard does a standard Bluetooth pairing appropriate for the device (it can be a Windows PC, a Mac, an Android device, or an iPhone/iPad). Move to the next device number and repeat for the next machine. Once you’ve done that, all you need to do is switch the dial and type for the desired device.

Where Logitech’s mastery of the keyboard comes into play (above the fact that the K480 has a great typing feel) is that the keyboard is customized for each device. The function keys act differently for an Android device versus an iOS device. On a Windows device, the keys directly to the left and right of the Space bar are the alt keys, but for a Mac OS computer, they are the CMD key (the dedicated Window Start key is the Mac OS alt key). It’s really very smart.

Physically, the K480 is solid, and has a weight that keeps it in place. It has a slot across the back that will let you settle a tablet at landscape into it, or even a phone and a tablet at portrait orientation. There are rubber feet on the underside that ensure no slippage. There’s also an on/off switch and the battery compartment for the AAAs that run it. You can also download PC/Mac/Android-specific driver software that will add some extra functionality on each, such as customizing the function keys and enabling on-screen notifications for the caps-lock.

So yes, I really like this keyboard. But how could it be better? First, I think the knob for switching devices is a bit too manual. Three buttons, each with an LED that blinks occasionally to let you know which device is active would be more elegant. Also, more than once when I picked it up and reached underneath to switch it off, I found it far too easy to accidentally open the battery compartment. Some design that locks it closed a bit more soundly would be good.

Further, while the K480 was obviously designed as an alternative to the Apple Wireless Keyboard, I want to see a full-sized version of this with a number pad on the right. If this is meant to be a desktop keyboard replacement, it needs to replace a true desktop keyboard. And lastly, I really really want to see a portable version. Being able to set yourself up with a tablet and a keyboard at a cafe, and multitask between them like you can with the K480 would be tremendously useful.

But those are wish-list items, and don’t really diminish my overall opinion that the Logitech K480 is a great Bluetooth keyboard that can really make those of us who are multi-device multi-taskers work just a bit more efficiently. If you fall into that category, I recommend checking it out.

The Logitech Bluetooth Multi-Device Keyboard K480 retails for $49.99, and is available on Amazon.

Pixar's 'The Good Dinosaur' Is Coming to Blu-Ray

Alphas Delves Deeper Into the Gray