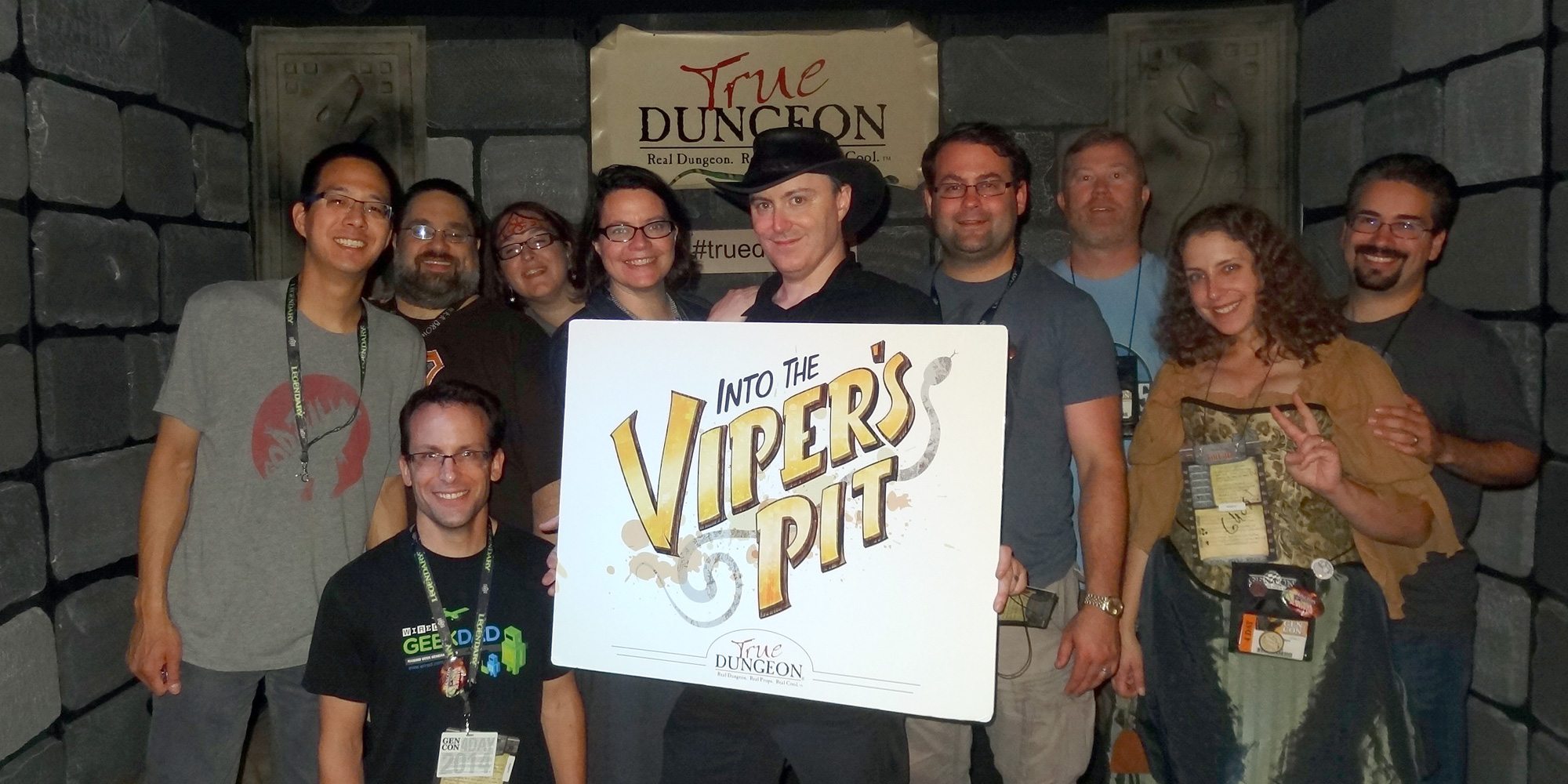 True Dungeon, the interactive role-playing experience that, for many, is the cornerstone of Gen Con, returned again this year with four new experiences to challenge, thrill, and frustrate gamers. Once again there was a combat and a puzzle track for two separate storylines, “Flight of the Zephyr” and “Into the Viper’s Pit.” The GeekDad crew and some friends had a chance to run through the puzzle track of “Into the Viper’s Pit.” How did we do? What did we think? Read on to get our impressions and opinions.

Dave Banks: The thing I always forget about True Dungeon is how incredibly stressful it can be. After completing the GeekDad-favorite puzzle track (there’s also one that focuses on combat), most of us were aglow with a sheen of perspiration, having (mostly) survived this year’s challenging and fun dungeon. Thanks to the difficulty level of the puzzles and the short time frame allowed in each room, there is a real sense of frenzy as the clock ticks lower and one can’t help but feel the weight of frenetically working as a team to finish before failing.

Each year, the minds behind True Dungeon come up with great challenges and this year was no different. The sand table, which used a Kinect to read our motions in real-time and provide immediate visual reactions along with color-coded topography was an amazing technological masterpiece — truly impressive. Much better than anything Microsoft has ever done with the Kinect. And the hall with dozens of tiles was reminiscent of Indiana Jones trying to make his way to the find the holy grail. Clever doesn’t begin to describe the challenges, nor the minds behind the two-hour adventure. They strike a very nice balance between solvability and challenging.

I wish I could say we all made it, but that wasn’t the case. While battling Medusa, more than half our party was turned to stone, leaving just the barbarian, the druid, the fighter, and me, the paladin, to engage the hideous Gorgon in battle. We slid our weapons along a table toward a silhouette of our foe, à la shuffleboard, to deal damage. All the while a woman dressed as Medusa wandered the room, trying to catch our eye and send us off with the others who had been petrified. Unfortunately, though we dealt some heavy blows, the fighter missed a saving throw against petrification during the fight, and she reduced the other three of us to negative hit points. Our wizard did manage to dispatch the serpent-haired monster with a final magic missile, but it was too late for this trio, who finished the game with “ghost” etched on our player cards.

For me, True Dungeon is a highlight of Gen Con. It’s a perfect blend of puzzle-solving, role-playing, and teamwork. While I didn’t survive this year, I still had a wonderfully exciting and fun time and can’t wait to play again next year.

Jonathan Liu: We had a great team for True Dungeon this year, as you can see from the photo at the top. Half of us were veterans (those of us who died in the last room last year) and the other half were new to the game.

After picking characters and loading up with the tokens that represent our spells and equipment, we were taken to the training room for a few minutes to practice our skills.

The fighters practiced combat, which is done using a shuffleboard-style table. You place your weapon token in a puck, slide it along the table, and the area where it stops indicates your “roll” for the attack, as well as the spot on the monster you hit. The Druid, Cleric, Bard, and Wizard all had various things they needed to memorize in order to successfully cast spells.

I played an Elf Wizard, and my responsibility was to learn the locations of various “planes” on a diagram. (You can see it below in Wendy’s hand.) The Druid learned shapes of leaves, the Cleric had to learn the names of various beads, and the Bard had runes.

During the course of the game, when one of us wanted to cast a spell, the dungeon master would ask us to identify the relevant item. What was somewhat challenging in the practice room could become even trickier in the middle of combat or while time is ticking down.

The Rogue (played by Keith Baker) often had trap boxes to disarm, using an Operation-style mechanism. He had to move a stylus from one end of a path to another without touching the edges, which would generally result in a clue. Fortunately, our rogue wasn’t selfish and shared clues with us rather than taking treasure for himself, and his real-life dexterity paid off: he opened every box we encountered.

Jenn Ellis, our bard, kept things lively by singing songs. It turns out that if she was singing an appropriate song for the situation, the dungeon master would reward us with extra hit points, protection, and so on. Kudos to Jenn for her quick-thinking musical skills!

It’s true that only 40% of our party survived to the end, but that’s a better success rate than last year, when we had a TPK in the last room. I had a blast, and I’m already thinking about playing True Dungeon again next year.

John Booth: I took on the role of a Dwarven Fighter, having learned from last year that I’m not altogether awful at the sliding disc combat system, and that having a fighting role on the puzzle track frees me up to help with room solving without dealing with the extra pressure of spell memorization or those steady-hand treasure boxes. (Casters and rogues, you have my admiration.)

There is also something to be said for having your first True Dungeon under your belt. When we entered that chamber with the Medusa, I looked down at the ground before she could make eye contact — a similar monster did me in last year.

I also feel like we benefited from being able to pull together a complete 10-person party, as opposed to being teamed up with another group. It made working together — which is crucial to passing these tests — that much easier.

David Faith: As a first time True Dungeon participant, I worried way too much about the rules. I sweated over whether I was making the right choices in equipping my character, the party cleric, and about whether I understood how his abilities worked. I needn’t have worried. The most important resource you bring into True Dungeon is your own facility for problem solving. The creators behind the game put together a series of realistic and challenging puzzles that can’t be solved by rolling dice. You have to look around the room, analyze what’s there, and remember patterns. Even my cleric’s spell casting depended more on my own brain than any mechanic, as I memorized a set of holy symbols and recalled them to invoke the magic. In the end the makers of True Dungeon achieved what they set out to accomplish, creating an immersive experience where at some point you forget that you’re merely playing a character—you are the adventurer.

Thanks again to Jeff and Lori Martin of True Dungeon for providing passes and fitting us into the schedule! To find out more so you can sign yourself up next year, visit the website.

Life Lessons — From Batman: The Brave and the Bold

6 thoughts on “We Came, We Explored, Some of Us Died: An Enjoyable Evening in True Dungeon”