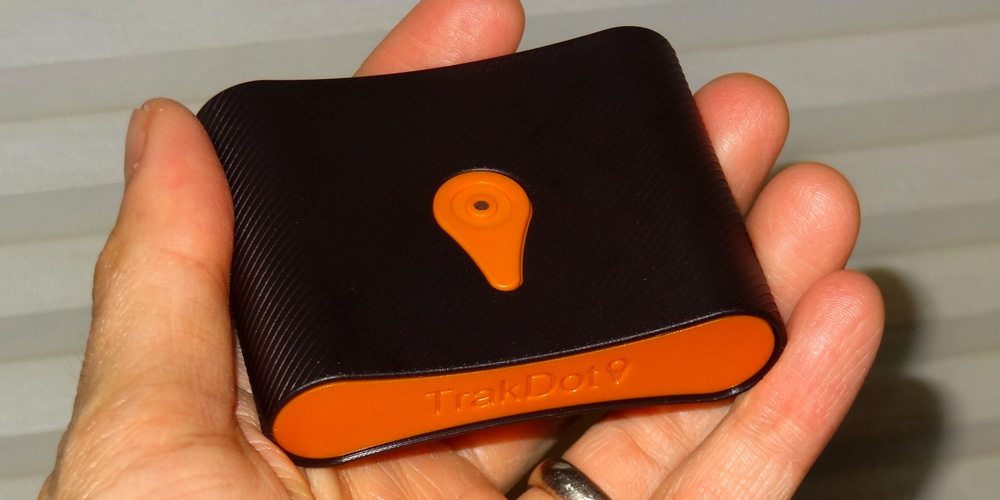 Dealing with lost luggage is never easy—on top of surviving a long flight with kids, then you have to figure out where to get another toothbrush and how long you can wear the same set of clothes. Most of the time I’ve been able to get my luggage back—it’s just been delayed and they get it delivered later. But what do you do if the airline can’t even figure out where your bags are? That’s where Trakdot comes in.

The Trakdot is a little pocket-sized device that tracks where your bag is and then alerts you via email, text, or the website. It actually uses cell towers rather than GPS, which often doesn’t work at airports. I got to try out the Trakdot and have used it on a couple of trips, as well as a driving trip, just to see how accurate it is.

Two AA batteries (included) power the Trakdot. Note that you should not use rechargeable batteries, and Trakdot specifically says not to use lithium-ion batteries. Instead of a regular battery compartment door, the entire outside “sleeve” of the device slides off—you’ll have to pry a little bit to get it over the teardrop-shaped button, but you know it won’t slide off in transit no matter how much your luggage gets shaken and bumped.

You’ll need to sign in for an account on the Trakdot website, and register your device. (Each one has a unique ID code inside near the battery compartment.) If you’ve got a smartphone, you can download the app for iOS or Android for free. On the website or the app you’ll be able to enter your cell phone number (or multiple numbers) if you want text alerts. If you have multiple devices, you can also choose a color for each one so that you can easily distinguish them if, alas, they get separated from each other.

The Trakdot will send you alerts every few hours to alert you of its status—location and battery level. Because it uses cell towers instead of GPS, it may not be quite as precise, but it does recognize airport cell towers so you’ll know when it’s within cell signal of an airport, which is really the most important information you need.

A side note: I thought their solution for complying with FAA regulations was pretty clever. The Trakdot detects when there’s a long sustained acceleration (as in takeoff) and automatically switches into airplane mode. It stays in airplane mode until it detects a long sustained deceleration (landing) and then switches back on, locates the cell tower, and then sends a message letting you know where it is: “Your Trakdot device: Suitcase #1 is in Orlando International Airport (MCO).”

Since my wife and I had a couple of trips this summer, I decided to give the Trakdot a shot and see how it performed. While driving around Portland, it would ping me every so often with a new location—perhaps when I switched cell towers—but I got fairly general locations like “Southeast Portland” or a particular intersection. Within range of airports, however, it gave me the names of the airports. As you can see, it just gives spot locations rather than a route, since it’s not GPS.

For a weekend camping trip, I used the Trakdot just to see how it did with driving, and it gave some periodic reports about its location, coming fairly close, but of course there were some gaps in cell coverage driving into forests and off the beaten path. Obviously it’s not designed for that sort of tracking, but if you were taking a long road trip it might be fun to have the device ping somebody you’re visiting so they can watch as you get closer.

Using the app, you can pair the Trakdot with your smartphone (before your trip, of course). This gives you an approximate distance to your bag, so you can better locate it in the baggage claim. At least, that’s the theory. I tried this out while carrying the Trakdot in my pocket and also leaving it at my house and walking around the neighborhood. Both of the images above (near and far) were taken when it was in my pocket. So I’m not sure how accurate it really is. I decided not to use the Bluetooth to locate the luggage.

Now, so far I haven’t lost my luggage with the Trakdot in it (knock on wood), but it would certainly be nice to have the Trakdot if my luggage didn’t arrive as planned. Earlier this year we took a trip to Florida, but our infant carseat never arrived. We were told that it would be coming on a later flight… which it didn’t. Then we said that if it arrived we’d rather it just be waiting for us back in Portland since it was a short trip anyway. Well, when we got back to Portland, the carseat wasn’t here, either—in fact, nobody was sure where it was. It wasn’t in the Portland airport, but it never got scanned to send to Florida. Eventually it got tracked down, somewhere in central Oregon, and nobody was able to tell us how it got there.

The Trakdot could help in that sort of situation—as soon as the Trakdot arrived at the wrong airport, we would have known, and we could use that information to get our bags back. Of course, I’m not sure how to attach the Trakdot to a carseat, but I’ll figure something out next time we travel with one.

The Trakdot retails for $49.99, with an additional required $19.99 fee for the first year of service. Currently the listed price for additional years of service is $12.99. If you want to track multiple bags, you’ll have to purchase multiple devices, which can get pricier, but if you travel a lot or have had to deal with lost bags, it’ll probably be worth it to you for the peace of mind of being able to locate your suitcases no matter where they went.

The Trakdot luggage tracker is available from Amazon or directly from the Trakdot website.